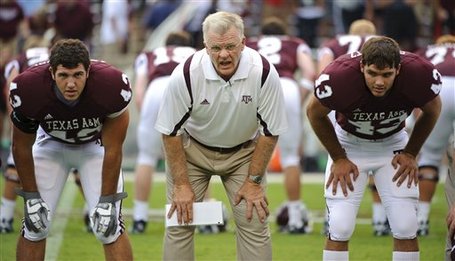 The Aggies are playing in the Cotton Bowl at 7PM on ESPN FOX (HD).

What will happen: This is going to be a bruiser of a game. It will be a defensive battle, and the game is going to be won by the team who is the toughest and most aggressive. A&M was playing, at the end of the season, like the best team in the Big 12. The Aggies will put together another incredible defensive performance, and Gray will rush for a big third-quarter touchdown as A&M gets its tenth win of the season over one of the country's best teams.

This is one thing the Aggies just shouldn't do.

Don't kick it to Patrick Peterson. Just don't. LSU's return man ranks fourth nationally with over 16 yards per punt return, and has taken a pair of punts back for touchdowns already this year.

A little overly dramatic, don't you think? The Aggies' future is on the line.

"We don't want to go back to the mediocre days in College Station," Miller said. "There's a lot of perks that come with winning and we just want to keep it going."

For A&M, a school that posted losing records in both of Sherman's first two seasons in Aggieland, tonight's outcome means everything in terms of how much the 2010 turnaround resonates on the national level.

How rare is A&M's freshman tackle tandem in a college football world where most offensive linemen redshirt, rather than play, in their first season on campus? Tom Rossley, A&M's quarterbacks coach/passing game coordinator, said he's never coached on a staff that started two incoming freshmen at offensive tackle.

So that's what happened...

For the first time since Texas A&M made its midseason change of starting quarterbacks, Aggies quarterbacks coach Tom Rossley acknowledged Monday that the move was made in part because of concerns about the arm strength of senior Jerrod Johnson.

Johnson, who underwent off-season surgery on his throwing shoulder, is the Aggies' career leader in total offense (8,888 yards) and passing yards (8,011 yards).

But he has not played since Oct. 23, when Johnson was replaced by junior Ryan Tannehill, who is 5-0 as A&M's starting quarterback heading into Friday's Cotton Bowl matchup against LSU.