Most Texas basketball fans know by now that Rick Barnes worked with Hall of Fame coach Jerry Sloan to revamp his offense prior to the 2010-2011 season.  In a previous post, I started to explain how Barnes' implementation of the Utah Jazz offense works.   I focused on a single set that contains many options, the Flex.  In the 2010-2011 basketball season, the Texas Longhorns ran this Flex set frequently.  But they also ran an additional set quite often.  For the purposes of this article, I am calling this set the 1-4.  It is a key component of Jerry Sloan's system.

Flex cuts, as well as staggered screens form the core of the 1-4 set.  Built on Flex the principles, this 1-4 set is versatile and loaded with options.  I am sure there are many elements of it that I have missed in my study.  Let's dive in and hit some of the high points after the jump.

This set is called the 1-4 because of the initial configuration of the players on the court.  The photo below shows how things start off.  The point guard has the ball on top (he is the "1").  There are two players on the wings and two players at the elbows (these are the "4"). 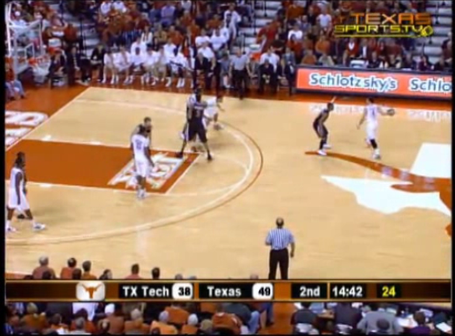 While the offense starts out in this 1-4 alignment, it doesn't stay in that alignment for long.  The point guard has multiple options, which I will get to in a moment.  Before I do that, I want to point out that each of these options is basically taking us to the configuration shown in the diagram below.  From the configuration diagrammed below, the play will continue with either a Flex cut followed by a "pick for the picker," or a staggered screen. 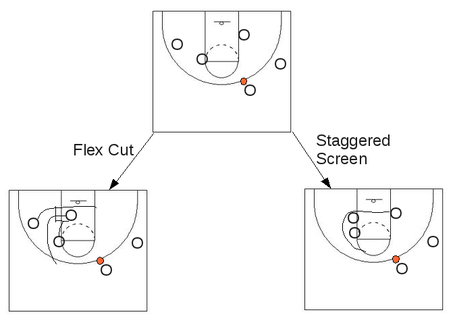 From what I can tell studying videos of the team, the point guard has three options at the start of the 1-4 set.  The point guard can:  (1) pass the ball to the wing, (2) dribble the ball towards one of the wing players, or (3) pass the ball into the high post.  Following each option will take the offense down a somewhat different path.  Let's break down some of what can happen in each of the three options.

Option 1:  pass to the wing

After the point guard makes the pass to the wing, we find ourselves in the position illustrated in the photo below.  After passing to the wing, the point guard (Balbay) will cut to the basket while attempting to run his man off of a high post screen.  This particular maneuver is famous enough to have its own name -- the UCLA cut.  John Wooden used this cut -- along with the Pyramid of Success, a nasty full-court pressing defense, and some of the greatest big men of all time -- to dominate college basketball during the sixties and seventies.  It turns out that modern man to man defense has a pretty good answer for this particular back screen and cut.  It plays the role here of being a nuisance screen, occupying defenders and giving the defense one more thing to worry about.  While this cut is taking place, the two players on the weak side are also repositioning. 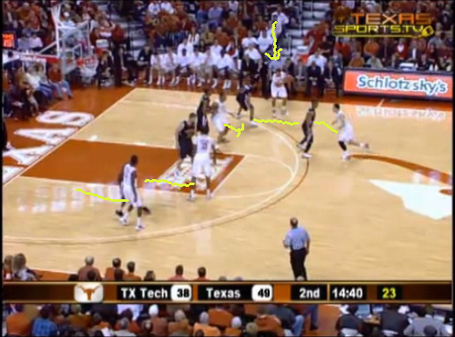 In the next photo, a lot is going on.  After setting the back screen for the point guard, the high post player (Gary Johnson) pops out to receive a pass.  That puts us in the configuration that I diagrammed near the beginning of this article.  Texas is following the "Flex cut" path from that diagram.  The point guard (Balbay) is preparing to screen across the lane for the wing player (Jordan Hamilton).  Hamilton is going to read this screen in a very similar manner to how he reads it in the Flex set that Texas runs, but we will get to his read in a couple of paragraphs.  The other post player (Tristan Thompson) is also preparing to set a screen, either for Hamilton (depending on how Hamilton reads the play) or Balbay. 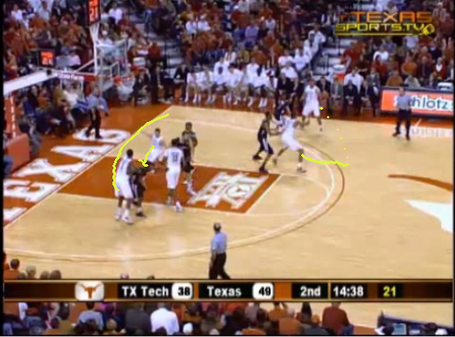 In my previous article on the Flex, I described how Barnes didn't use the pick for the picker down screen element in the set that I analyzed, and tried to rationalize why this was.

As I said above, the down screen pick for the picker is very hard to defend.  But not every Flex coach uses it.  In fact, one of the most well-known Flex practitioners, retired Maryland coach Gary Williams, does not really like to use the down screen.  This down screen often results in a mid-range shot, whereas Williams prefers to work the ball inside.  Additionally, in Texas' case last year, this down screen would have often taken Tristan Thompson or Gary Johnson away from the basket if Texas had been setting this screen.  Rick Barnes' has historically gotten much of his offense on rebounds.  The down screen takes one of the best offensive rebounders on the court out of good rebounding position.  And while Texas gives up the pick for the picker, the rest of this set will look quite nice when we see some of the other options below.

It turns out, that while Barnes dropped the pick for the picker in his Flex set, he is keeping it in his 1-4 set.  Let's look at the same photo again, shown below.  In this case, the big man (Tristan) is setting the down screen, rather than (potentially) receiving it.  Setting that down screen isn't going to pull him away from the rim, and the man coming off the down screen (after Hamilton clears the Flex cut) will be a guard.  So the pick for the picker is not banished from Barnes' offense, it just isn't in what I am calling his "Flex" set.

Before we continue on with this play, I want you to notice the similarities between the photo above, and what is happening below in the excerpt drawn from my Jazz staggered screen article.

Now, the magic happens.  I have drawn yellow lines in the photo below to show where the weak side wing and weak side post players will go to set their staggered screen.  Success from this point on will require that all five players on the court read the play properly, and react to each other and the defense.  While this sounds hard, it doesn't really have to be, as we will see below. 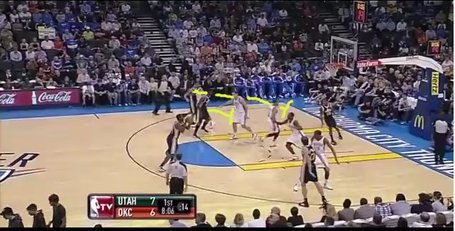 In the Texas Longhorn play that I am breaking down, the point guard sets a screen for a wing player coming off of the Flex cut.  But with a simple adjustment via play call, this set could just as easily be run for the point guard to come off a staggered screen set by the wing and post players, as the Jazz used to run for Deron Williams.  In other words, the set could be made to follow the staggered screen path in the diagram from the beginning of this article.

Anyway, let's get back to the Texas set that I am breaking down.  In the photo below Balbay is setting a nice screen for Hamilton.  Hamilton's defender is following him through the screen rather than attempting to beat him through it, so Hamilton makes the Flex cut.  This is exactly the same read that we see in Texas' Flex set.  You can watch the entire play here.  You will also notice that Tristan is setting a screen for Balbay, creating the pick for the picker action. 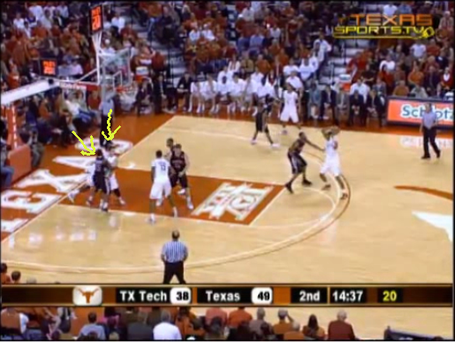 As is typical on a Flex cut, the wing player is reading his defender as he prepares to make the cut.  The photo below is taken from the same set run at a different point in the game.  I have again labeled Hamilton and his defender with yellow arrows as Balbay prepares to set his screen.  This time, it appears that Hamilton thinks his defender will be able to fight around Balbay's screen, so instead he uses Tristan Thompson's screen and pops out to the wing.  I don't know if Hamilton was quite patient enough here.  He doesn't give Balbay much of a chance to set his screen (he never really finds out if the defender will try to beat him through it), and he doesn't really set his defender up all that well for Tristan's pick.  But at least this gives us an idea that the options on the Flex cut out of the 1-4 are pretty similar to the Flex set.  You can watch the full play here.  A lot more happens in that video clip, but we will save breaking down the options after a post entry pass in this offense for another day. 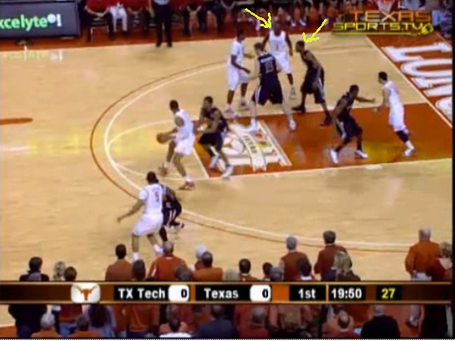 Option 2:  dribble the ball towards the wing

Let's reset the 1-4 set, and look at the second option for the point guard.  In the photo below, Balbay is the point guard and has the ball.  He is dribbling toward J'Covan Brown on the wing, and signaling to him that he is heading his direction. 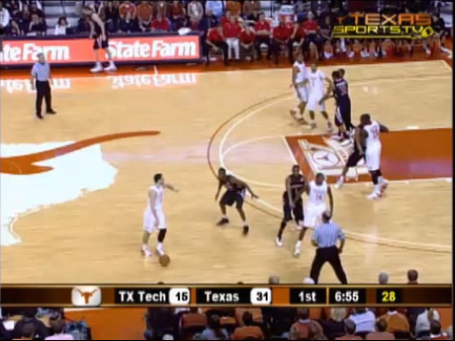 In the photo below, Balbay has the ball at the wing, and is preparing to pass the ball to the player at the high post.  J'Covan is now under the basket, and preparing to work through the staggered screen being set up on the opposite side of the floor.  We are now again at the configuration from the diagram near the top of this article.  This time, Texas will be following the staggered screen path.  Rather than again describing all of the reads possible on this play, you can read my earlier post on the Jazz staggered screen play.  J'Covan's man follows him under the screen, J'Covan curls, and he ends up with a wide open three.  You can watch the full play here.  The play is wonderfully executed.  Notice how J'Covan hesitates just a second under the basket and gives the screen time to set up. 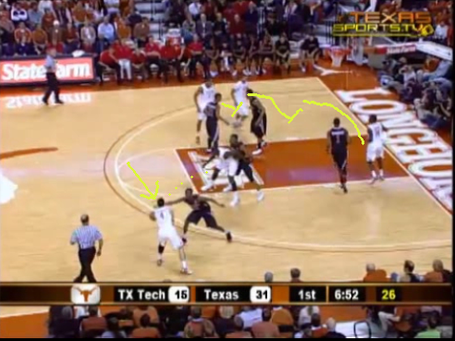 If you study video of the Utah Jazz when Sloan was their coach, you will find that they have a great series of cuts and screens that occur after a high post entry pass in the 1-4.  Texas does some of this as well.  In some cases, such as this clip, the offense sets a staggered screen of the sort I have already described.   But I also found an example where the offense played things a bit differently.  Let's reset with the 1-4 setup in the image below.  The point guard has the ball.  He is preparing to make the high post entry pass to Matt Hill. 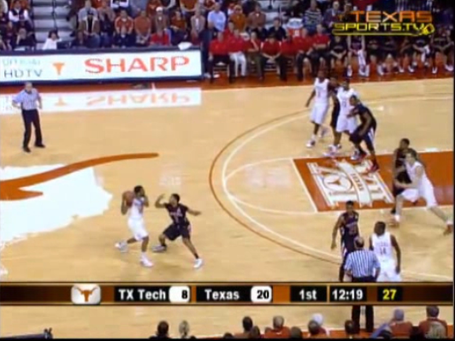 In the next photo below, Matt Hill now has the ball at the high post (labeled with a yellow arrow).  The wing player on the ball side cuts to the basket, while the opposite side post player rolls to the basket and prepares to set a down screen.  The point guard moves to the wing.  Hamilton on the opposite wing seems to be hanging out, but he is actually getting ready to set his man up and get an open shot. 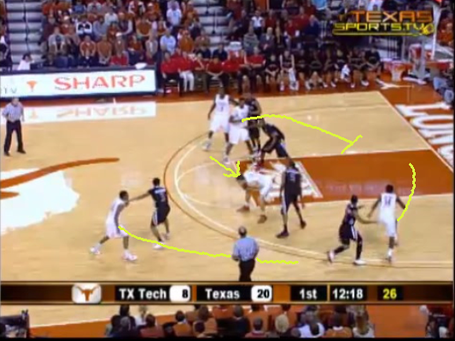 In the next photo, we see Hamilton breaking for a hand-off from Matt Hill.  We also see the down screen.  Hamilton does a nice job of setting up his man and using the hand-off to get his shot.  You can watch the whole play here. 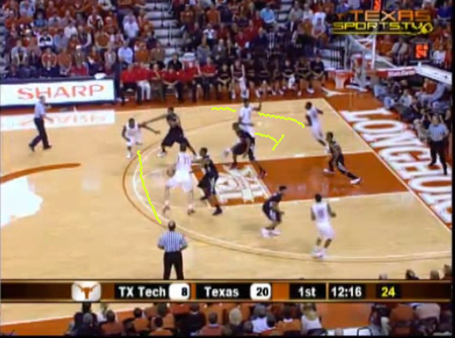 I am not sure what triggers Hamilton to take this hand-off, rather than screening down with Tristan to set up a staggered screen.  He is probably given the option to go either way on this play.  Anyway, any play that results in a wide open three for Hamilton is a pretty good play.

I hope that my last couple of posts have given you a better flavor for the Texas offense.  The offense is nice because while it has several different sets, they are based on the same few elements.  These elements (the Flex cut and the staggered screen) are rock solid things upon which to base an offense.  They can be practiced over and over.  And once a player learns how to read the a particular screen in one set, it is easily translated to another set.