Mack Brown will meet the press this morning at 11:00 a.m. local time. As with all of his pressers, you can watch the streaming action live on TexasSports.TV.

"It's really big to be 4-0. I'm not sure a lot of people would've thought five weeks ago we would've been 4-0 right now. Guys are playing with a lot of confidence. We know a lot more about us now than we did when we started the season and coming up to a better Iowa State I think than we played last year on the road, with one of their largest crowds ever, undefeated this is a big win for us."

Right, coach. But let's not forget that Texas Tech is also 4-0 right now.

Regardless, there was a lot of fun Saturday night in Ames and a lot to chew on. I thought Coach Brown's post game comments were tempered. He appreciated the win but did not want to brag or gloat about his team as he, like the rest of us, saw so many things to improve upon.

Particularly unimpressive was the second half effort, especially on the offensive side. The team regressed by not playing a full sixty minutes of football. To be considered one of the best, you have to keep your foot on the throttle the entire game. The young Texas Longhorns are playing exceptional football and making the plays when they need to but appear to be lacking the killer instinct unlike this week's opponent certainly has in spades.

We thank Iowa State for gift wrapping the game with the turnovers and timely penalties. Texas did not make these mistakes, capitalized on the other team's hiccups, and managed another victory on the road.

Highlights to ponder as you get ready for the presser thread.

Positive: Great to see senior leadership take advantage of opportunities when called upon. Fozzy Whitaker did just that. He stepped time and again and ground out some tough yards when the team needed them most. He missed on some plays, whiffed on a big blitz pick up early on, but his overall demeanor and play willed the team forward.

Positive: Speaking of senior leadership, how about Blake Gideon? I hope he is acknowledged in some fashion by Coach Brown with a game ball award. Blake played arguably one of his best overall games in a Longhorn uniform highlighted by his ladder-climbing first quarter interception and, according to Gus Johnson, the "son of a coach" ran the ball "down the sandlot" for a spectacular 47 yard return after catch. Watching the replay, Blake set up in the Diaz 4-3 Bench Scrape in nickel zone and read Steele Jantz all the way.

The play not only was a career highlight for Blake, proving again why he has started every play since putting on a storm trooper uniform, but a critical one in the game as ISU was marching down the field having just entered Longhorn territory. Texas would only come away with a field goal on the turnover when the offense failed to capitalize on great field position but it proved who would control the outcome of the game. Additionally, his 7 solo tackles led the team with one being a sack. Congratulations to Blake.

Positive: The defensive stand early in the second quarter deep in the Texas red zone was a highlight of the evening for the squad. Trailing only 13-0 with the game still on the line, ISU got it to the Longhorn six yard line but gifted the defense a motion penalty on third and short, then a missed fade toss into the end zone on third and nine, then a wide-right missed 29 yard field goal netting the Cyclones ZERO points. Sometimes it's better to be lucky than good.

Positive: DJ Monroe really played physical Saturday night. He ran north-south once he hit the edge on his speed sweeps and did it with authority. His stats were not overwhelming but the contribution should be noted all the same.

Positive: With the game still very much in question with 10:30 remaining in the 2nd period as the Horns offense was sputtering, Coach Harsin made a quick strike decisive play call taking advantage of the drive extending head-butt penalty by Cyclone cornerback Leonard Johnson, who was pulled from the game and later carted off the field, with a 48 yard touchdown streak from Ash to Davis picking on the freshly minted replacement db. Harsin has whachacall a killer instinct, yes?

Positive: Turnovers and fourth down stops. This was the difference in the game and offsets our immature offensive woes.

Positive: Adrian Phillips timely pass break ups, one on a potential touchdown throw early in the game and one on a fourth and four drive killer in the second quarter.

Positive: Jaxon Shipley and Steve Edmond. That is all.

Neutral: Special teams were highlighted by two individual plays. Diggs snatching the ball free while laying on a pile early first quarter resulting in a fumble and the blocked punt by Mykkele Thompson resulting in the Josh Turner recovery and touchdown run. That will wash the mediocre, at best, performance the rest of the night in all other phases. Not sure what the answer is on kickoff coverage but it had better get figured out in a hurry. As well as an additional kicker solution. At this rate, Tucker will not be able to boot a field goal in the 4th quarter at some point later this season.

The issue is not instruction or reps. Both Coach Akina and Coach Applewhite are seasoned teachers of special team play. Someone had better step up as it is going to get real in a hurry. 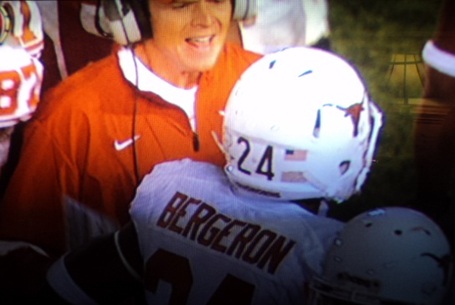 on the opening kick return of the second half against Iowa State.

Neutral: Mike Davis needs some more work. He has got to catch the ball in his "hands". While only a sophomore, his has tremendous upside. But letting the ball get into your body is not going to get it done. Learning how to use the body effectively to screen a defensive back is also a trait that is unique to great receivers. He is going to need to turn the corner to move into the "elite" receiver status. And while his physical play in the running game is tremendous, he needs to step up his ball catching skills for us to move to the next level.

Negative: The physicality of both offensive and defensive lines were absent Saturday night as ISU had their way on both sides of the ball. These squads really took a step back. Offensively, we struggled in establishing a consistent running game by not opening lanes. Defensively, the poor showing provided ISU the motivation they needed to stay in the game. Not sure if the cobwebs had not been dusted off in pregame given the two week hiatus, but this is an area of concern right before the biggest regular season game of the year.

Negative: Coach Brown won't mention it publicly, but Case McCoy needs to grow up. I appreciate that in the heat of battle, and when things might not be going smoothly, it is easy to let emotion get the better of your actions (see some of my game thread comments), but he cannot give into the temptation of showing any kind of disappointment when shuttled off the field. The gesture to the booth at the end of the 2nd quarter right before the Harsin trick play score to Ash, is just not acceptable. Mack Brown called him on the carpet in front of a national audience. Add to this the report by Craig Way during pregame of Harsin taking Case aside and giving him a one-on-one pep talk. Hopefully his outburst was an outlier situation and not indicative of what is happening behind the scenes.

Negative: Shuffle pass. Twice called during the game, one each half. Really?

Negative: Not sure what contributed to the high number of nicks and dings, but the injury bug stung us a bit in this game.

Coach will also discuss the impressive Sooner squad, his respect for the program that Stoops has built, blah, blah, blah. So be it. I recognize this is Brown's way of giving the opponent their due, but I'm not interested in the glad handing. Not this week. Not ever. Be that as it may, the Sooners are sneaky good and have a lot of speed on the edge. Landry Jones is the key to their success and getting to him early and often will be the difference between us being in position late in the game to pull off the upset or wind up on the short end of the stick.

Join us here for the live presser action.