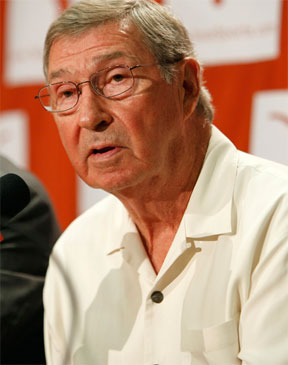 Whether the criticism is coming from Texas A&M or Nebraska or the college football world at large, the perception is that Texas is being painted as the bad guy, the evil empire or whatever. Longhorn Network probably helps perpetuate that. Does that concern you as the man in charge here, that the Texas brand is taking a PR hit?

"We're good people. And we do it the right way. And we've got 550 kids that we love, and we treat them the way they're supposed to be treated. And we're in it for kids. We didn't do the Pac-12 (because of) the kids. It wasn't money, it wasn't anything else. We don't want to put our kids in airplanes and have them in airplanes half their life going back and forth.

"We've worked hard to save the Big 12 twice now. We happen to have a network which, we did, we told everybody for five years that, 'We're gonna do it, we're gonna do it, you ought to do it, too' - you know, we told 'em. Any time TV came up in a room, we said, 'We're gonna do our own third-tier network.' We've been open about it. And today they're looking for reasons, or somebody to blame. A&M's looking for a reason, and they've made their reason that we've got a second game on the network. You know? Nebraska had three last year. I've not heard one word about that.