An Open Letter to Darius White

Share All sharing options for: An Open Letter to Darius White

That sounds way too formal. What I mean is, what's up, man?

That no. 4 you wear kinda means a lot to me. After all, my handle on here stems from watching Limas Sweed make some big plays for the Longhorns wearing that number and every time he did, I would pound my chest and note that the Ghost of Big Roy helped him make that play.

Not me, I mean the actual ghost that I believed in as a result of my superstition-addled, college football-crazed mind.*

That time that Limas pulled in that kinda-big catch against Ohio State to help propel Texas to the national championship game?

Yeah, I was in my living room attempting to break a rib with my fist and praising the Ghost of the Playmaker (my first handle on BON way back in the day). I must have strong ribs, but that's not the point. I was praising the Ghost of Roy Williams, the first Longhorn receiver who stole my heart when I became a Texas fan upon enrollment at a university whose football program has consumed my life virtually ever since, but especially in the last four-plus years.

I thought his spirit still resided in that no. 4.

Unfortunately, since adopting this nom de plume years after Big Roy departed, the original namesake and inspiration has fizzled in the NFL. As has Limas.

Then there was the Dan Buckner era, which I felt never fulfilled the big playmaking shoes left by his predecessors. Well, actually I didn't just feel that way. He flat-out didn't. On the field, not to mention all the messing with Aggie chicks who love horses. And not in that dirty way that Aggies love sheep. I hope.

Last we saw of ol' Buck he was brawling with some Bruins. Keep it classy, Dan. At least he left when the authorities showed up this time. Progress.

Well, anyway, I didn't mean to bore you with all that history and stuff, but like I said, this is important to me. When you committed, as I was...I was...words don't really do it justice. Suffice it to say that I thought the Ghost was strong in you: 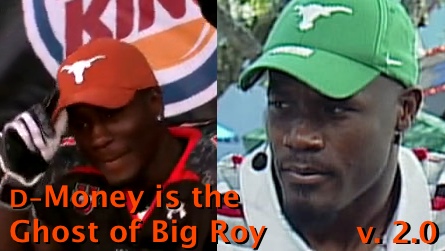 I saw it on your face that day watching you commit to Texas at the Under Armour All-American game. I loved the clear relief that you felt from ending the process and when you put on that hat, you were Roy Williams. I thought for better, but maybe it was for the worst. Maybe you were looking like NFL Big Roy, not the college version who went HAM so many Saturdays during the fall with that Longhorn on his helmet.

From my spot in the peanut gallery masquerading as an analyst, it's tough to know what the deal is with you.

That sinking feeling in my stomach as rumors swirl around your potential future makes me think it might be a negative attitude.

That recruitnik in me wonders if maybe it was the lack of development from not having top-notch coaching and quarterback play your senior season that might even be bad enough to make Cayleb Jones jealous right now.

That your raw skills just weren't ready to be honed into sharp-edged, pass-catching machine.

That optimist in me wants to pound my chest when you make a big play and yell, "That's the Ghost of the Playmaker I've been waiting for." That optimist in me, that eternal optimist until there's finally no reason to believe, that optimist, misguided as it may be, truly wants that opportunity.

Not the type of money that you're sending back to your lil bro. I don't want to worry about that right now. That's for Texas compliance to worry about.

If it doesn't happen at Texas, that's life in the world of college football. If it happens somewhere else, I'll be happy Roy's Ghost finally manifested himself, albeit in a different guise.

Are you going to make me pay for my belief? Make every Texas fan pay for their ruined expectations?

Buckner I could discard without any type of hole in my heart -- I never believed him worthy. But you? Not so easily, my friend.

Still, in the end, this isn't about my silly hopes or the immense pressures of a fanbase. This is about your fulfilling your own hopes and dreams. About self-actualization. Talent maximization. All those things that make you every bit of the person that you can be.

And seeing those hopes and dreams you forged about your time at Texas start to slip away? That is the true travesty here.

Your high school coach was skeptical about that nickname at first, right? All you have to do is just prove some more doubters wrong. Look in the mirror and you can see it in yourself, no one doubts that.

*Sadly that college football-crazed mind was nowhere near its current level. This could be really bad. Or really good, I guess. But enough about me.