Check me if you've heard this one before. Kid's fast, as in outran-virtually-anyone-you-have fast. Not real tall, though. From Angleton, Texas.

Sounds a bit familiar, right? Well, after benefiting from smallish, fast, Angleton products DJ Monroe and Quandre Diggs this season, Manny Diaz and the Texas defense will have to slow down another Angleton speedster -- Missouri sophomore running back Henry Josey.

The combination of Josey and another sophomore Texan behind the center, Lake Dallas alum James Franklin, will present the greatest combined rushing threat the Longhorns have faced this season and will test the run fits of the Texas front seven with the zone-read series unlike anything the group has seen.

While Franklin is a solid runner on his own and can be tough to bring down at 6-2 and around 225 pounds, he doesn't possess near the explosiveness and potential for big plays as does Josey. In fact, Josey leads the country in yards per carry at 8.6, more than a half yard per carry better than Oregon star LaMichael James. It's an average that Josey achieves by breaking a lot of big plays -- the most in the country more than 10 yards actually, with 43, more than nearly half of the FBS teams in the country.

According to Diaz, what makes the offense especially dangerous is the ability of head coach Gary Pinkel and offensive coordinator David Yost to dial up the constraint plays to punish a defense for overplaying their base offense. In other words, they do a good job of making sure that they have the right answer and the defense has the wrong one:

Their running game is really well-coached. They're obviously very experienced up front. With their quarterback being a run threat, that obviously evens up the number of blockers on defense. In terms of what they do, they always have a counter to however anybody is playing with them.

As always, one of the main benefits of the option game is the ability to eliminate defenders. As the last decade or so has shown in college football, spread options offenses can put an incredible stress on defenses by creating the space to turn one missed assignment into a touchdown. That's the quandary that the Missouri offense will prevent for the Longhorns.

Fortunately for Texas, Manny Diaz has an answer to defending the zone read. Instead of scrap exchanging his linebackers, a common tactic to defend the series, he uses his favored fire zone blitzes to make sure that the quarterback can't make the correct read. 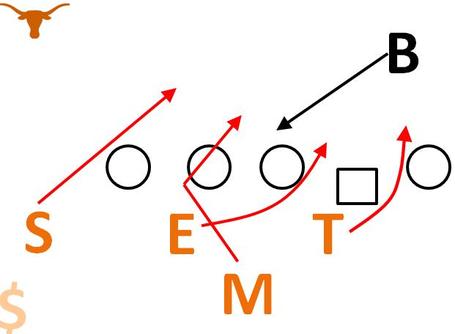 By hanging the backside defensive end to stop the quarterback and force the "give" read, Diaz then sends his linebacker through either the B or C gap (depending on whether there is a tight end on that side of the field), while slanting his defensive line towards the quarterback and into the play.

Diaz calls it "the most stable thing he can run" because he's basically devoting the extra player that Missouri would have optioned off anyway, making sure that his defensive backfield isn't stressed by any extra responsibilities.

However, the difficulty against Missouri is that those aforementioned constraint plays could make Diaz pay for even using something as stable as the fire zone, possibly by using a play Texas has had a great deal of trouble defending this season -- the speed option. Missouri can also attack blitzes by throwing bubble screens to the wide receivers and running sprint-out passes.

As a result, Texas might be better off not committing linebackers to the running game and instead forcing Franklin to keep the ball and then putting some hits on the Tiger quarterback to wear him down physically.

In terms of pure numbers, it's often a better strategy to force the handoff instead of having a one-on-one situation with the quarterback against a defensive end -- unless the defense executes a scrape exchange with a linebacker to help out -- and instead sending the running back into the defensive line, where there are more players who can beat a block. Basically, more things can go wrong for the offense and right for the defense.

Against the insanely explosive Josey, however, Texas is probably better off keeping the ball out of his hands as much as possible.

Another major factor will be how Manny Diaz elects to play the chess match against the Missouri offense. If he decides to show fire zones, Missouri can quickly switch the running back to the other side of Franklin to get off a play heading away from the fire zone running either the zone read or the speed option, all without giving the defense a chance to respond.

Against Texas Tech, Diaz was able to win between snaps by forcing a delay of game and several false starts by changing up defensive looks. In one particularl instance, the defense showed blitz and got Doege to check out of his running play before the defense backed out of the blitz and was able to stuff the wide receiver screen the Texas Tech quarterback audibled into.

In the end though, the safest best may be to simply play the Missouri offense pretty straight up and rely on the rapidly-improving defensive line to make plays, something the group has done in abundance the last two weeks after struggling much of the season. It's a strategy Diaz hinted at during the week:

When I talk about being an attack-style defense because we are a penetrating defense, it's not about blitzing. It's about penetration. It's about the way the defensive line plays the run and the linebackers play the run.

To limit big plays, the linebackers will also have to play a role, as Diaz mentioned. Keenan Robinson has never been comfortable taking on blockers at the second level, but will likely have to do so against Missouri with some success if the Longhorns are going to limit the explosive back.

Given the tempo at which the Tigers play, Jordan Hicks will see some snaps and will have to avoid the type of missed run fits that have contributed to several big plays this season, most notably the 4th and 1 touchdown run by Jeremy Smith against Oklahoma State.

According to Diaz -- and the numbres -- there is small margin for error against Josey:

The issue is, if you make a mistake and somebody ends up not in their gap -- and they do a lot of things that cause you to think about where you should be, and if you guess wrong -- he can go all the way.

All of that isn't even the sum total of the problems that the running game for Missouri can present. The Tigers also like to use the jet sweep and other motion across the formation to threaten the edges and widen the linebackers:

Schematically, they cause you a lot of problems before the ball is even snapped by the way they line up and motion guys into and out of the backfield.

It's one of those games where you want to be physical, but there's going to be more to it than just being tough and physical. We have to be disciplined to stop their running game this week.

Playing with discipline is especially important for the defensive ends, who have to understand whether they are crashing the play to force a keep read or hanging to force to the give read. Franklin may not be a burner, but if the defense ends consistently get out of position, he'll be able to pick up positive yards and put the Texas defense in tough positions.

The good news for Texas is that the Longhorns are much more confidence in the scheme than they were at the beginning of the season, which is allowing them to play at a much faster speed:

I think we're obviously getting better as the year's gone on because we've gotten more comfortable with how we've played the run. It's hard to be unsure and aggressive at the same time. They are, obviously, by nature, opposites.

The more you see it happen on game speed the more you envision it and by nature you get it.  The defensive line is improving week in and week out.

The defensive line, really since the beginning of October, you can see them getting a better understanding of how they're supposed to fit in the run game (and getting pressure). The whole picture has to be the way you expect it for everybody to truly trust that if you're going to be there, then I can run 100 miles through that hole. But if you're not going to be there then I'm not going to go all the way. I think that's where we're getting, and the front seven guys have really improved in that aspect.

It will be up to that front seven to consistently make the right fits and beat blockers or it's going to be a long that sees Josey add to his nation-leading carries of 10 or more yards. And that won't be a pretty sight for either Diaz or Texas fans.