Mack Brown will meet the press this morning at 11:00 a.m. local time.  As with all of his pressers, you can watch the streaming action live on TexasSports.TV.

"We brought a knife to a gunfight. Then our blade broke. It happens, usually not to us, but it happens." - jerryw/poster BarkingCarnival.com

As you know, starting last Friday morning, the Longhorn Network streamed broadband coverage until 12:00 a.m. this morning.  The post game coverage after Saturday's game included Mack Brown taking questions outside the Longhorn locker room.  He really looked battle hardened and poised.  And it was all he could do not to be critical of the officials in what could be argued as a one-sided called game, especially the "deflating" call against Kenny Vaccaro in the 2nd quarter.  Add to this the critical injuries to both senior leaders Whittaker and Robinson and it's a wonder Mack took questions at all.

But grace under fire is his forte.  And while he expressed disappointment in the offensive performance, he still managed to give a wink and a nod to his defense which played a whale of a ball game.  This is the first loss to Missouri Coach Brown has notched.  And it is the first game since OU 2004 that Texas failed to score a touchdown.

The Missouri offense came in averaging over 500 yards and 35+ points per game.  The Texas defense had a different idea and held them to less than 400 and only 17 points.  Emmanuel Acho led the way and was rewarded with another College Football Performance Awards honorable mention, his second in consecutive weeks.  The Wuerfel Trophy finalist and Lott Trophy semi-finalist posted 12 tackles of which 7 were solo and 4 were TFL, 2 PBU, 1 QBH, and one FF on the opening drive of the game with our backs to the end zone.  That is an ALL MAN effort.  Alex Okafor and Jackson Jeffcoat also get big props for working the edge and containing Franklin who only rushed for 33 yards.  They blew it up for 18 tackles, 2 sacks, and 2 TFL's between them. 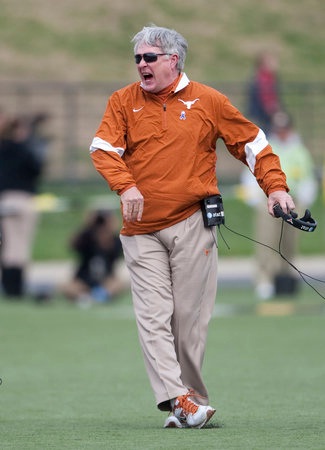 About the only criticism offered to the defense is the lack of great speed in the defensive backfield.  Akina leads the effort at DBU, but he can't teach speed.  Texas needs to find an answer to this.

My hope is that today when team awards are announced, the Hard Hat goes to Machete (Vaccaro).  That would be about the only way Mack could send a message to the Big 12 office for the game changing helmet-to-helmet questionable penalty call.

On special teams, unfortunately the blocked punt and missed extra-long field goal overshadow the great day Justin Tucker had on punting which found him also gaining a College Football Performance Award honorable mention punter nod.  He averaged 45.3 yards on eight punts with 4 of those inside the Mizzou 20-yard line.  And what a day Leroy Scott had, with the punt block that resulted in a ST safety and great field position for the offense after the ensuing punt.

Offensively, the Longhorns just plain old stunk.  It is probably easy to point to one area and proclaim the game turned on its bad play.  The fact is that as a unit, regardless of the hand that was dealt with the injuries, they regressed to OU game output.  In spite of Jeremy Hills and DJ Monroe working hard to shore up the rushing attack, the synchronization we had witnessed the last three games was just MIA.  And this was most evident in the passing game.

Coach Brown said many times leading up to the game the Horns would have to throw the ball to win given the defensive front line of Missouri was about as well a seasoned crew the team had faced all season.  But throwing best describes what occurred as there was scant evidence of actual passing and catching.  We did not see a lot of that going on regardless of which quarterback was trotted onto the field.  And make no mistake, it takes a team effort working together to make a passing attack work.  The line has to give the quarterback ample time to complete passes.  The receivers have to work to find holes in the coverage.  Everybody has to be on the same page.  They say practice makes perfect.  Is it possible our passing game is not coming along due to who they are practicing against?  Not sure on that one but I will be keeping my eye on the statements as to why we are not seeing production on the field with the "good" reports seeping out of practice sessions.

One note in this regard.  David Ash is about as mature a young man as they come.  In his post game remarks to Samantha Steele, he shouldered the offensive setback.  I was very impressed with his maturity and leadership in this regard.

This is largely countered with seeing the new co-offensive coordinator, Brian Harsin, throwing his team under the bus.  Contrast his comments with Diaz who repeatedly takes responsibility for the defensive performance.  When the defense performs badly, he takes responsibility.  When the defense performs admirably, he is quick to say it is due to the player's performances.  Not to be prickly, but Harsin needs to understand the way he communicates after a win or a loss is equally important to what he says during practice as it affects player morale and their psyche.  It is easy for an arm-chair fan to sit back and criticize when not actually performing those duties, but leading organizations has taught me that the Diaz approach is the way to go.  So note to Harsin:  Get this fixed.  There are long-time Texas fans and supporters watching your moves as much or more than what happens on the field.

With that said, the offense just did not stand a chance as it's 1st, 2nd, and 3rd running back options were out with injuries and none larger than the senior leader Fozwhitt Whittaker.

It was announced last night that Fozzy will undergo season ending surgery after tearing both his ACL and MCL during a 1st quarter run on Saturday.  Horns up to this warrior.  His senior leadership on the offense as the best Red Zone producer on the team, along with his kick return threat, will be sorely missed and sadly irreplaceable.  And to make matters worse, senior MLB Keenan Robinson was sidelined early in the game with a hand injury resulting in him coming out of the locker room in his airplane clothes.

Coach Brown will again remind Longhorn Nation how injuries are evaluated and who has the ultimate say in who plays and who sits.  The burden rests on head football trainer Kenny Boyd's shoulders and his alone.  It is easy to wish players on the field but their safety and concern is tantamount.  I don't envy his role.

It was heartening to hear Emmanuel Acho and Blaine Irby  expressing their love and prayers for Fozzy.  It was also good to hear Mack express his well wishes after the game to Missouri Tiger running back Henry Josey who also suffered a terrible season ending knee injury during the game.  We often fail to remember the human side of players and coaches.  It might do us some good to focus more on that given the recent college football story lines.

Regarding the Horns next opponent, Kansas State, expect a full run down of stats and platitudes.  And rightly deserved.  Kansas State is now in the driver seat for a top-tier bowl game.  Texas has a great opportunity this Senior Night to knock back those chances a rung or two.

It would be perfectly understandable to be overly critical of these Longhorns but the truth is this is a developing team.  A young team.  A team full of masons rebuilding a program.  Brick-by-brick.

Join us here for the live presser action.