Share All sharing options for: Texas Longhorns Basketball: Inside the Numbers, Week 1

At long last, the basketball season is here. This week we saw Texas tip off twice against Boston University and Rhode Island. Well, those of us who had to work probably only were able to catch the Boston University game. So far, there is a lot for Texas fans to be excited about.

This season, I will be writing a weekly column diving into the week's basketball action. I am going to try to use advanced basketball statistics, and a bit of logic and intuition to try to understand what is happening with the Texas Longhorns. But this isn't a column about fantasy basketball, it is a column about real basketball. I think the statistics help us understand the game better. With a calculator and a box score, you can really figure out a lot about why a given team won and the other team lost.

But these statistics don't tell us everything. Often times, they don't tell us in great detail why something happened. But they do show us where to start looking for things. After that, we need observation, logic, and understanding to go further. That is the hard part, but also the fun part.

I believe that data tell a story. My job is to help illuminate that story, but not to get in the way. Hopefully, I can do that.

Success in basketball just comes down to four simple things:

1. Maximize the number of shots you get per possession.

2. Minimize the number of shots your opponent gets per possession.

3. Be as efficient with your shots as possible.

4. Make you opponent as inefficient with their shots as possible.

We can look at this week's game through the lens of this approach.

Texas handled Boston University rather easily. The information in the table shows us just how this happened. We see that Texas had a significant advantage in the number of shots that they took, as well as an advantage in shooting efficiency. Texas had nearly an extra 14 chances to score (based in FGA + 0.475 x FTA). This was primarily because Boston University turned the ball over in 37% of their possessions. This is a crazy number; NCAA teams typically turn the ball over on around 20% of their possessions. Texas took good care of the ball, with turnovers in only 14.3% of their possessions. This is a huge difference, large enough to be decisive on its own. But in addition to this, Texas was reasonably efficient with their shots, getting a TS% of 0.564. Boston University had a putrid 0.390 TS%.

The only aspect of the game where Boston University outperformed Texas was rebounding. Boston University got 45% of the available rebounds at the offensive end. Many of these were long rebounds from badly missed shots. This is an area of concern, and it is something that we will keep track of as the season proceeds.

We can also look at the results from the Texas Rhode Island game in a similar way. Unfortunately, I wasn't able to see the game. Being gainfully employed sort of gets in the way of watching basketball games that take place on a Tuesday afternoon. The statistics tell me that the game was played at a very fast pace (about 78 possessions, whereas the Boston game had about 66 possessions). The thing that really jumps out in the statistics is just how well Texas shot the ball (TS%=0.626), while Rhode Island did not shoot very well (TS%=0.516). Texas also took care of the ball (15.4% turnover rate), as did Rhode Island. Both teams grabbed a high percentage of offensive rebounds. Rhode Island missed a lot of shots, so their raw offensive rebounding total was greater. All of these offensive rebounds meant that Rhode Island was able to get about 7 extra shooting opportunities. This allowed them to make the final score closer than it otherwise would have been. If Texas had just been mediocre on the defensive glass (instead of being terrible), this game would have been another blowout.

So far, we can say a few things about this Texas team. It looks like they are going to struggle on the defensive glass. This is not a big surprise, given the lack of size, but there is more to this problem than just being small. It is something that we will be keeping track of over the course of the season. If Texas can just get their opponent's offensive rebounding percentages down to around 35%, it will make a really big difference.

This Texas team can really shoot the ball. We all knew J'Covan Brown could shoot the rock. It is really exciting to see how well some of the other players on this team can shoot. I am particularly excited by Julien Lewis. The Texas guards also seem to be playing some defense. The Boston University guards had a TS% of 0.315 and the Rhode Island guards had a TS% of 0.475. Basically, the NCAA median for TS% typically is around 0.55. Anything below 0.50 is pretty low.

Setting Expectations for the Season

With a couple of games under our belt, we now have a feel for what the Longhorns are going to look like this year. There is a lot to be optimistic about after two games. The rebounding worries me, but everything else has looked pretty good. Still, I want to temper our expectations. Last summer, I did a study that looked for common threads in successful teams in NCAA basketball. Basically, the major findings were that the best teams typically have some combination of experienced players and players who were ranked in the RSCI top 30 as recruits.

I don't know how much I really trust the quantitative predictions of my regression models, as there is a pretty wide amount of expected random error between the predictions and actual outcomes. Instead of making predictions, I prefer to make a simple plot that shows the number of RSCI top 30 players a team has vs. the number of minutes of playing experience for each team. Below I have made such a plot, which includes the preseason AP top 25, along with a few other teams just outside the top 25. I have also included Texas in this plot. 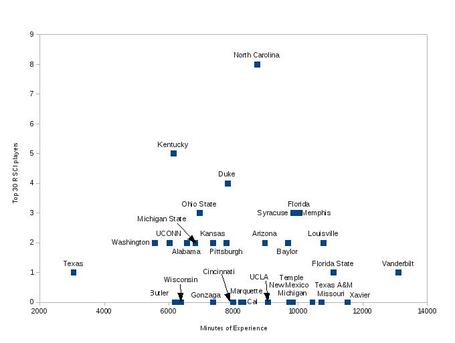 The good news is that many players will gain valuable playing experience this season, so we would expect Texas to move substantially to the right on this plot for the 2012-2013 season. My guess is that Texas adds something like an extra 5000 minutes of experience to their total for next year. So that moves next season's team right into the thick of things.

I am really excited that basketball is back. Hook 'em.