The Longhorns are driving steadily down the field during the first possession against Kansas, attempting to score on an opening possession for the first time since the 2009 season, as well as the bludgeon the Jayhawk defense into submission with massive doses of Malcolm Brown early.

Comment: Unfortunately, LHN missed the start of this play, but the Longhorns run a variation of the base Power play the offense ran, oh, about 85 times against Kansas, with even numbers in the box, a good sign for Texas against what was an overmatched front all night. Also, a front that has been overmatched all season. So there's that.

Notice that the right side of the line down blocks away from the play, with Cody Johnson at the top responsible for the contain player on that side and "tight end" Luke Poehlmann heading towards what appears to be the Mike backer. Josh Cochran is taking what appears to be a five-technique defensive end. Mason Walters leads into the hole. 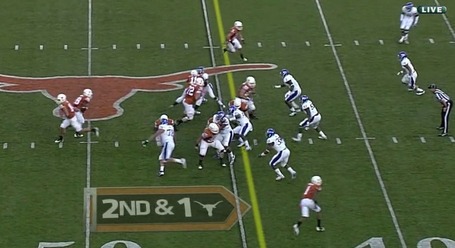 Comment: Cody Johnson has a crucial block here and it's difficult to see from this particular progression of slides, but he does a much improved job of breaking down before the play and getting his base underneath him so he can explode into the defender, while still giving himself the chance to keep his legs churning.

Meanwhile, the right side of the line has done their job with Cochran sealing the defensive end/defensive tackle inside, leaving only Poehlmann and Walters to land their blocks to potentially create the type of blackboard play that coaches dream about -- the type of play executed exactly as the coaches draw it up in on the blackboard during meetings.

Comment: Look at the movement that Cody Johnson gets, not only walling off the defender, but moving him almost two yards backwards, once again, a major improvement from earlier in the season. Walters crunches the Sam backer while Poehlmann executes his own block to perfection, giving Brown the type of hole he received frequently in high school and through which any competent back can run.

Comment: This, folks, is the image of a blackboard play. Complete and utter domination.

Comment: The only question now is whether or now Brown can break off a huge play instead of a big play and unfortunately a zebra gets in the way of Brown's preferred angle and he just can't get the sharp cut around him to set up the block for Mike Davis, where he could potentially take out two defenders. 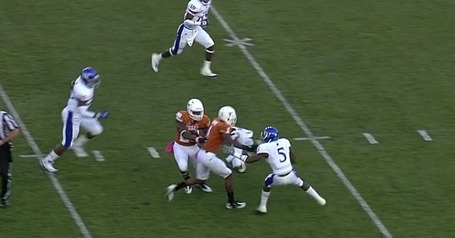 Comment: Instead, Brown can't cut the corner created by his striped non-friend and trips over Davis' leg trying to get outside for what might have been the final move before finding the end zone. 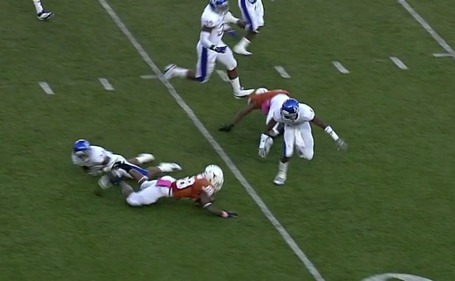 Brown didn't make it, but the pristine blocking from his offensive line and fullback created the opportunity for him to make essentially one player miss and perhaps it was only the unfortunate positioning of the official who kept it from happening.

And while it's tempting to wonder if Johnathan Gray would have made that play or if the play's success was mostly a function of the terrible Kansas defense, it's extremely difficult to achieve blackboard-level plays at the college level against any opponent. Furthermore, considering the high talent level of offenses that Kansas has faced to this point in the season, as bad as the unit looked in DKR on Saturday, it might not be the worst in the country. Maybe just second or third worst.

It's also encouraging that this play happened extremely early in the game -- the Texas offensive line hadn't yet worn down the Kansas defensive front, the big uglies for the 'Horns just made outstanding blocks.

Given that the Texas Tech defense has been repeatedly gashed in the running game, it's well within the realm of possibilities that the Texas front could once again execute a handful plays exactly as Bryan Harsin draws them up on the backboard.

If that happens, the Longhorns have an excellent chance of racking up 250-300 yards or more in Austin on Saturday, the type of dominance on the ground that could lead to a victory if the defense can hold up its end of the bargain.