Share All sharing options for: Texas Longhorns Basketball: Inside the Numbers, Week 2

With this Texas basketball team, we will have good weeks and bad weeks. Based solely on game outcomes, it was a bad week. Texas dropped two games in New Jersey. If I can summarize these games in a simple way, I would say that in both of them Texas played some fairly good offense, and some pretty poor defense. In fact, the offense was excellent for stretches. The defense was not so effective, with Texas struggling in a number of ways. Fouls, more than anything, were the big problem, but field goal defense, turnovers, and rebounding also came into play in New Jersey.

We also saw Texas adopt a somewhat different approach on offense. Rick Barnes seems to be experimenting some with this team, trying to figure out how they should play. Particularly in the game against NC State, Texas played less of the Utah Jazz offense, and instead opted for a pick and roll approach that looks a lot like how Florida plays under Billy Donovan. NC State was pretty clearly not well prepared to defend the screen and roll, and J'Covan Brown ate them alive in the first half. I think this sort of style of play suits Texas well, giving both of our primary ball handlers (J'Covan Brown and Myck Kabongo) an opportunity to attack the defense. Still, at times this approach can stagnate. After Brown left the game, I would have preferred that we returned to the more structured Jazz offense, rather than relying on the guards to continue to make plays off of the screen and roll. Right now, Myck Kabongo is still adjusting to the higher competition at the college level, and putting the ball in his hands and expecting him to break down the defense every possession is asking a little too much. He will be that player (hopefully in a month or two, but perhaps not until next year), but he isn't there yet.

Let's dive into this week's action, after the jump.

The Longhorns suffered their first loss of the year against Oregon State. In a section below, I will describe how we should weigh the relative importance of shooting efficiency and the number of shots a team gets when looking at a box score. The Texas vs. Oregon State game gives us a good chance to apply this concept. Both teams shot the ball very efficiently. Texas had a somewhat higher efficiency, with a TS% of 0.640. Oregon State ended up with 9 extra shots (as measured by FGA + 0.475xFTA). As I will show in a section below, a 0.01 differential in TS% is worth approximately 1.3 extra shots. This means that the Texas advantage in TS% is enough to make up for about 5 extra shots, but not the 9 extra that Oregon State ended up with.

Texas was also bit by the turnover bug. In the first two games of the season, Texas had a turnover percentage (TO%: the number of possessions that end in a turnover) of 13.8% against Boston University and 15.4% against Rhode Island. These are both very good totals that indicate that Texas was doing a good job of protecting the basketball. Against Oregon State, Texas turned the ball over in 28.3% of their possessions. This is a very bad number.

I view giving up a high percentage of offensive rebounds and turning the ball over a lot as essentially self-destructive acts. Getting less than 60% of the available defensive rebounds goes beyond just having an undersized team. It indicates that you probably aren't boxing out as well as you should. Likewise, turning the ball over in more than 25% of your possessions probably suggests that guys are trying to make plays that aren't there, and are not really valuing the basketball. In games where you get less than 60% of the rebounds on defense, and turn the ball over in more than 25% of your possessions, it is really hard to win. If it weren't for the fact that Texas shot the ball really well (TS%=0.640) and got to so many offensive rebounds, they probably would have been beaten rather easily. As the season continues, let's keep track of how often Texas is above or below these two self-destructive threshold values.

While this game was a tough loss to watch, it definately was a game that had a silver lining. Texas improved dramatically on defensive rebounding. Grabbing 72% of the available defensive rebounds is a very good result. Texas also took pretty good care of the basketball. With both teams holding down the defensive glass, and taking reasonable care of the basketball, neither team had an advantage in terms of the number of shots taken.

When two teams each get the same number of chances, it all comes down to who is more efficient with their shots. Texas' TS% of 0.570 was pretty good. The big problem in this game was the Texas defense. Giving up a TS% of 0.593 makes it pretty hard to win. The fouls were really harmful, with NC State shooting 44 free throws in a game that only had 67 possessions (compare that with the 80 possession Oregon State game). That is a lot of trips to the line. But it was more than just the fouls that hurt. During NC State's big second half run, Texas could just not ever seem to get a stop. NC State shot over 60% from the floor in the second half. There will be times where your offense isn't working and shots aren't falling, and this is when good defense helps to protect a lead or keep you in a game. A little bit better defense by Texas, and they would have held on.

It is pretty clear at this point that defensive rebounding is the most significant weakness of the Texas Longhorns. In the last four games, Texas' defensive rebounding percentage (DRB%) has been 57%, 56%, 54%, and 72%. This lack of rebounding seriously limits Texas' potential defensively. Just to put into context how bad the rebounding has been in the first three Texas games, the NCAA median DRB% this year is about 67%. In a game like the Oregon State game, if Texas had managed the median level 67% of DRB%, Oregon State would have had around 13 offensive rebounds, instead of the 18 that they tracked down. This difference of 5 rebounds would have meant that Oregon State would have shot around 5 fewer shots. Recall from my game description above, Texas' TS% advantage was significant enough to make up for about 5 extra shots by Oregon State, but not the 9 extra shots that they took. Take away 5 of those 9 extra shots, and Texas probably wins the game. If things don't improve, this won't be the last game lost due to a failure to rebound. We can take some encouragement from the better job Texas did on the boards in the NC State game.

We can estimate the individual DRB% for each player on the team. These are just estimates, because we aren't actually counting the total available rebounds while each player is on the court, but rather are taking the total available rebounds for a given game, and assuming that these rebounds are evenly distributed over the course of a game. This is a standard approach, and it gives the formula for individual DRB% 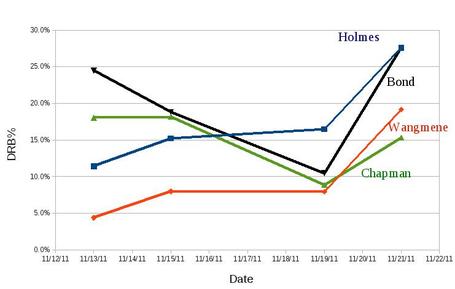 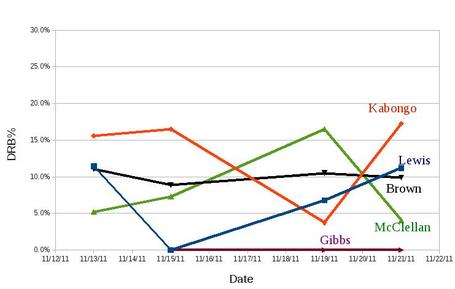 I am not going to comment a lot on these numbers. It is still very early in the season, and we don't want to over interpret data from small sample sizes. That said, Wangmene needs more games like the one against NC State, and fewer games like his first three. Otherwise Bond is going to start to take more of his minutes. Also, Kabongo does a pretty good job chasing down defensive rebounds.

Texas scores on a UCLA cut

During the off-season, I spent a fair bit of time studying the Utah Jazz offense that Texas runs. Texas operates quite often out of the 1-4 set. This set often times starts with a pass to the wing followed by a UCLA cut. Put simply, a UCLA cut involves a high post player setting a back screen for a guard. It is a nice idea, but it is actually pretty rare to see teams score off of this maneuver at the highest levels of basketball. For the most part, Texas uses this as a nuisance screen that helps to set up the defense for other screens. But every once in a while, we will see the defense mess up and give Texas a basket on the UCLA cut. That happened in the opening game against Boston University. I know this game happened over a week ago, but my work travel schedule prevented me from putting this up sooner.

It is instructive to look more closely at this play, to see just how the defense messed up. The play starts off with Myck Kabongo passing the ball to J'Covan Brown on the wing. Then Kabongo makes his cut off of the back screen. The image below shows the moment just as Kabongo is starting his cut. I have pointed out three defenders with yellow arrows. Kabongo's defender is the furthest to the left in this image, and he appears to be in good position. There are probably different views on how you defend the UCLA cut, but the most common one is that the defensive guard should not allow the offensive player to cut on the ball side of the screener (near side in this picture). He then relies on the help of the man defending the screener to cover the cutter for a moment until he recovers. That brings us to the next defender marked with a yellow arrow, the man defending the screener. He is not doing much to help out here, and as a result Kabongo runs free. Of course, then there is the weak side help defender, who mostly stands and watches the play, but then shows up just in time to foul Kabongo. 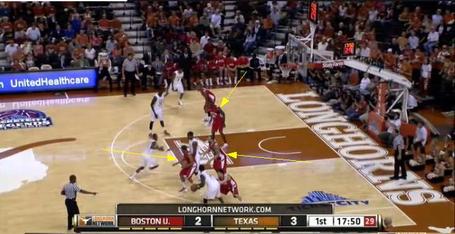 The relative importance of extra shots and shooting efficiency

Basketball is a really simple game. You win by some combination of taking more shots than your opponent and being more efficient with your shots then your opponent. My basic approach to analyzing basketball focuses on these two levers of performance. Recall that we use FGA + 0.475 x FTA as our basic count of how many shots a team takes, and true shooting percentage (TS%) as the measure of shooting efficiency. We can do a pretty simple calculation to estimate the relative importance of these two factors. The basic question that I want to answer is: if a team has a 0.010 advantage in TS%, how many extra shots does their opponent need to make up this difference?

For a given game, the point differential between team a and team b will be

I am using the term shots to mean the total FGA + 0.475 x FTA for each team. We can do a little algebra to find that

In a typical NCAA basketball game, a team will get approximately 60-80 shots, so let's assume that 70 shots per game is typical. A very typical TS% is about 0.55. Using these numbers, we can substitute into our equation to figure out how many extra shots a 0.01 increase in TS% is worth in the final point differential.

Using this relationship, we can determine that for a typical NCAA game a 0.01 differential in TS% is worth approximately 1.3 extra shots. This changes as the number of total shots in the game and the shooting efficiency change, but this gives us a pretty typical number.