Share All sharing options for: Texas Longhorns Basketball: Inside the Numbers, Week 3

When you sit down and look at a basketball schedule, you will generally find at least one long stretch in the non-conference portion with very few games that will attract a lot of attention. Texas began one of those stretches last week. Between now and Texas' December 17 contest against Temple, only one team on Texas' schedule is what we think of as a basketball power. And that team, UCLA, has struggled out of the gate this season.

While the Texas schedule may seem dull for the next few weeks, there are a few good things about it. First, it will give the young Longhorns some time to continue to gel into a cohesive unit. Ideally, Myck Kabongo can start to find his offensive game over this stretch. Additionally, after this run of games Texas may be able to claim the Southland Conference championship.

This week, Texas hosted Sam Houston State and North Texas. After the jump, I provide the statistical recap of these games. Additionally, I look at Texas' shooting distribution for the season, briefly sing the praises of Jonathan Holmes, and touch on UCLA's disastrous start to the season.

I know the few people who were able to watch this game are upset about Texas' performance. Texas shot the ball poorly, but otherwise handled a weaker team. The game was played at a snail-like 60 possession pace, which held the score down. Although looking at the pace neutral points/100 possessions indicates that neither team was scoring very much on a per possession basis. Texas obviously shot the ball poorly (less than 32% from the floor). This happens. Sometimes the shots don't fall. There is no reason to worry, in my view, because up until this game Texas has shot the ball very well.

If we look past the shooting (I know this can be hard to do, but let's try) everything else in the table above strongly favors Texas. Texas got 12 extra FGA + .475 x FTA, had a 41% offensive rebounding percentage, and took care of the basketball. For the second game in a row, Texas held their own on the defensive glass, with a respectable 69% defensive rebounding percentage. Recall that this is a big concern for me; in the early part of the season controlling the defensive glass has been Texas' biggest problem.

Diving into the individual performances, Alexis Wangmene had an excellent all around game. It was his second good game in a row on the defensive glass, with an individual defensive rebounding percentage of 16.5%. Jonathan Homes also played very well. He has rebounded well all season, and this was his second game with greater than a 20% defensive rebounding rate, at 23.8%. Holmes and Wangmene also were a critical component of the Texas offense, combining to take about 30% of the team's shots with a true shooting percentage of about 0.65. I personally don't want to attach a lot of significance to a poor offensive showing by our guards in a game played in an empty arena against a lackluster opponent over a holiday weekend. Just remember, and ugly win is always better than an ugly loss.

Texas' sizable advantage in TS% more than makes up for the fact that North Texas got more shots. Recall that 0.01 differential in TS% is worth approximately 1.3 extra shots, which means that Texas could have survived a shot differential of almost 20 shots with their tremendous shooting efficiency advantage. After two good rebounding games in a row, Texas struggled on the boards, particularly the defensive boards, where they allowed North Texas to recover half of the available rebounds. Texas did take good care of the basketball, with a very low 12.5% turnover rate. North Texas turned the ball over in almost one quarter of their possessions, giving away much of the advantage that they gained on the offensive glass.

If you look at the plot below of TS% vs. % of team shots for each of the Texas players, and compare it with the plot in the next section, you will see that the distribution of shots against North Texas was a fair bit different from what we have previously seen. It was much more balanced. This is probably a good sign, as J'Covan Brown shouldn't have to carry such a heavy load offensively all of the time.

Looking at the Texas shooting distribution and efficiency

With the first few weeks of the season out of the way, this seems like a good time to check in on the Longhorns' shot distribution, as well as the shooting efficiency for each player on the team. As always, I am using true shooting percentage (TS%) as a measure of shooting efficiency and FGA + 0.475 x FTA as a count of the number of shots. I like to plot TS% vs. the % of shots for each player on the team as a way to study these numbers. The chart below shows these results through the Sam Houston State game. 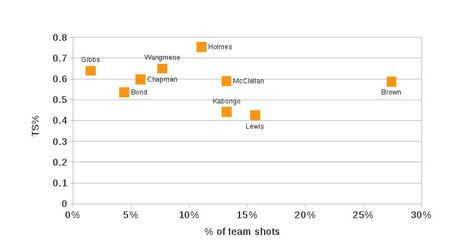 This plot graphically depicts just how large of a role J'Covan Brown has played for this Texas team on offense. He is taking 27% of Texas' shots, with a very good TS% of 0.587. Much of the rest of the team is also shooting fairly well, with only Julien Lewis and Myck Kabongo struggling. Lewis is sort of an interesting case. He has shot the ball very well from the three point line, hitting 37% of his three point attempts. This means that on three point shots Lewis has a TS% of 0.555. But he has struggled from two point range, only making 31% of his two point attempts. Through last weekend he had only attempted one free throw.

Holmes and McClellan have both been quite efficient shooting the ball. Holmes' ability to shoot the basketball has really impressed me so far. His 0.75 true shooting percentage leads the team. Also consider that Holmes is probably Texas' best rebounder. Jonathan Holmes is a solid basketball player. After watching Holmes play for a few weeks, it is interesting to me to think that he was only rated as the #70 player in his incoming class, according to the RSCI consensus rankings. Holmes was the fourth highest rated recruit of the six Longhorn freshman. Are there really 69 freshman in the country that are better basketball players than Jonathan Holmes?

Looking ahead to UCLA

The Longhorns will visit UCLA this Saturday. As of last Sunday UCLA had not yet beaten a Division I team. Monday night UCLA recored their first Division I win against Pepperdine.

UCLA started out the season ranked #17 in the AP preseason poll. They then proceeded to lose games to Loyola Marymount, Middle Tennessee, Kansas, and Michigan. So what is up with the UCLA Bruins? Well, as of the weekend they were ranked last in Division I basketball -- yes, I said last, as in #345 -- in opponent three point shooting percentage. Prior to the Pepperdine game, their Division I opponents had shot 60.7% from beyond the arc. UCLA was also ranked #344 (that is, second to last) in opponent effective field goal percentage. As of last weekend, they were also ranked #320 in Division I in opponent two point field goal percentage, at 55.5%. UCLA held Pepperdine to 33.3% from the three point line, which lowered their season total opponent three point percentage against division I opponents to 56.9%, which still puts them in last place.

Some of this is probably due to the quality of UCLA's opponents. Let's take a more careful look at each of UCLA's first four opponents to try to imagine how much of UCLA's defensive problems are due to bad defense and how much are due to a tough schedule. To provide information about this, I am going to go through each team and present their three point shooting percentages in their game against UCLA, and their three point shooting percentages against the other teams they have played (stats are from last Sunday).

Record as of Sunday was 3-2, with losses coming to Middle Tennessee and a surprisingly good Harvard team.

Record as of Sunday was 6-1, with their only loss coming in double overtime against Belmont. You may recall that Belmont lost to Duke by a single point in their season opener this year. Middle Tennessee and Belmont are not teams to be taken lightly.

Record as of Sunday was 3-2, with losses coming to Kentucky and Duke.

Record as of Sunday was 5-1, with their only loss coming to Duke.

After playing UCLA on Monday night, Pepperdine was 3-3, with losses against Cal State Bakersfield and Central Michigan. Pepperdine is not a very good team.

So what can we conclude from this? First off, I want to warn you to exercise some caution in interpreting these data. The difference in a single game between shooting 50% from the three point line and 35% from the three point line is about 2 extra made shots. With that caveat out of the way, you will notice that each of the first four UCLA opponents shot much better from three against UCLA than they did against everyone else on their schedule. Additionally, only one of these four teams (Middle Tennessee) has shot for a fairly high three point percentage against their non-UCLA opponents. Kansas' non-UCLA three point shooting percentage of 34% is a bit better than NCAA median, while Michigan and Loyola Marymount have each shot for only about 31% from the three point line against their other opponents. So, while I think we can say that UCLA has played a tough schedule to start the season, they are clearly not guarding the three point line as well as they should. Still, giving up 57% from beyond the arc is at least in part the type of anomaly you get with small samples this early in the season. The second worst team in the country in terms of opponent three point percentage as of last Sunday was North Carolina Central, with an opponent three point percentage of 51.8% It is hard to imagine UCLA remaining this far behind everyone else for very long.

It turns out that Texas has been shooting the three point shot pretty well this season. As of last Sunday, they had made roughly 37% of their three point attempts. They are clearly a team that is built to punish opponents who don't guard the three point line. Keep this in mind as you watch the UCLA vs. Texas game next weekend.