Share All sharing options for: Snap Shots: How Manny Diaz Stumps The Opposition

In the span of time it takes you to walk from your Lazy Boy to the fridge and grab a cold one, Chris Whaley had his first sack as a Texas Longhorn. Everyone will recall Whaley was a highly regarded HS running back from Madisonville who, due to no fault of his own, grew into a very big dancing machine. In his redshirt freshman year, then offensive coordinator Greg Davis moved Whaley to H-Back but as events unfolded in the 2010 season, the H-Back appeared to be an all but forgotten position.

But with the staff changes, Whaley found himself further looking outside any future offensive playing time. So before spring camp this year, Whaley made the decision to switch sides and is quickly making his mark at defensive end on the roster and listed as 2nd tackle on the depth chart just behind Howell or Dorsey.

While somewhat unusual for this switch to occur at the college level, the formula had already proven itself with former Longhorn Henry Melton who made the transition from highly touted high school running back to now playing defensive tackle for the NFL Chicago Bears.

So in homage to iconic Texas S.I.D. Bill Little, that is where our story begins.

You'll recall our preseason reviews of the Manny Diaz defensive schemes, including a strong dose of FireZone blitzing and Lombardi run-to-daylight fundamentals. What we have seen season to date is Diaz transitioning and adapting his defensive philosophy to the pass first Big 12 offenses. It has not always been an easy task for him either as the two Oklahomas proved. But one thing we have seen is when the opponent is a run first team, he can make life miserable for opposing offensive coordinators as he absolutely nails scheme and in-game adjustments.

This was the case in an :11 span during Saturday night's third quarter against Kansas in which Diaz dialed up one of his patented plays we shall not soon forget.

To set the table, the Texas Longhorns were having their way against a pretty good Jayhawk offensive squad averaging through 6 games 30+ points and over 400 yards of offense. But through roughly the middle of the 3rd quarter against Texas, the Jayhawks had only scratched out TWO net offensive yards, appreciably before their season average.

Leading 26-0, the Texas offense had just punted to KU after freshman quarterback David Ash gave up a 15 yard sack on 3rd and 10 putting the team out of field goal range. KU offensively had not gained a single first down up to that point in the game (not counting the 15 yard roughing the passer penalty by Alex Okafor on the first series).

In other words, the Horns were ballin'.

But the ebbs of football appeared to be slightly flowing Kansas way when on the first plays of this possession offensive coordinator Chuck Long finally exposed a crack in the door.

The result: A net gain of 18 yards. This was 9X their net offensive production for the entire game up to this point. In looking at the sequence, it was very important for the Texas defense to stiffen on this drive primarily because with significant time left in the game, it was not out of the question the momentum pivot was possible if Kansas could have found a way into the end zone. As we all know momentum is a funny thing and once it gets rolling down hill it is often hard to stop.

Well, stop is definitely an understatement in this instance. What happened after that second down is vintage Diaz. Employing mostly the same base set with unlimited success the entire game, the Texas defense faced off on 3rd and 8 in a 3-3-5 setup.

Diaz substitutes and puts his speed rush team on the field with Okafor, Whaley and Jeffcoat up front and the starting Linebackers of Acho, Robinson, and Hicks. 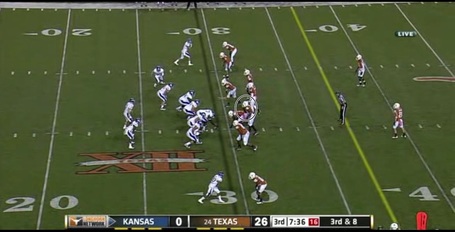 I have highlighted Acho in the above frame as he emphatically barked out an audible which pulled Whaley out of his stance (below) and pulled the 6 in-the-box players to the line of scrimmage with a potential all-out blitz look. 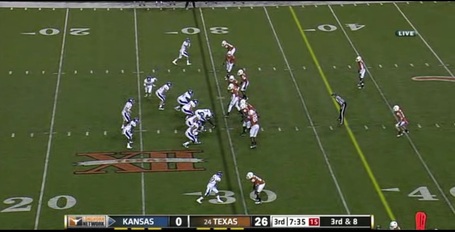 Okafor also gets into the barker act (above) calling to Vacarro to follow his coverage responsibility. Again notice the defensive front alignment still showing a possible all-out-blitz to the unassuming offensive center.

But not so fast. 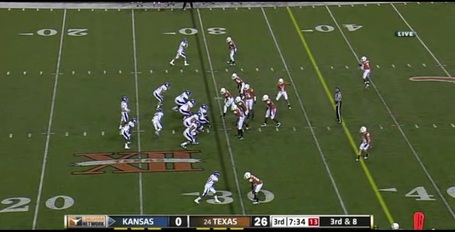 No sooner had the Kansas center looked up to verify no change was needed in the initial blocking assignments than low and behold he sees his whole world turned upside down. The front Texas 6 have now bunched inside showing a possible exposed edge contain weakness but strengthening at the point of attack. Texas had also mixed LB's and DL's in the formation with each in a semi-start position. At this point, the quarterback could have checked down to the boundary side running back. But he doggedly moved ahead with the 3rd and long play call to his peril.

Further solidifying the defensive play alignment, all players now form up into a strong, standing start, attack position with Okafor playing 0 tech and who knows what Jeffcoat and Whaley think they're doing in a loose amalgam of hybrid, stand-around linebacker. Robinson and Acho showing semi-3 technique, but your guess is as good as mine. Maybe Rick Barnes called this Box-And-1 zone play from the booth.

This next shot (above) is a Jedi-Master mind _ _ _ _ as Hicks, Robinson, and Acho show contain positions but Jeffcoat quickly shifts to his left behind Okafor and in front of Whaley in a freight train alignment, preparing to overpower the center of offensive line, right as the ball is snapped.

The beauty of the play design is its simplicity. Diaz "now you see me, now you don't" scheme is a basic three on two. But the pre-snap shifts and movement cause confusion and uncertainty. This is the genius. Not only do the lineman have to quickly adapt to the changing alignment landscape, but the assignments become a guessing game as there is no telling which gaps are going to be penetrated...or exposed. Some might say this is a gambling style defensive set but in reality all he does is get his guys in the best possible position to make a play. Unorthodox maybe, but in this particular instance the dance works.

Once the ball snaps, as the above snap shot highlights, you see all 3 Texas linebackers drop back into their coverage assignments while the three Lonhorn DL's move into action. Okafor pushes to his right initially occupying the center, leading a stunt with Jeffcoat who crosses to his left taking on the right guard. The blocking commitment opens a gap leaving the lightning quick Chris Whaley RUNNING TO DAYLIGHT in a stunningly straight line to the quarterback for his first career sack. 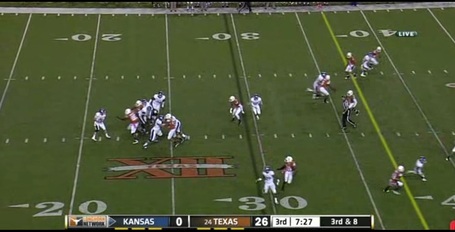 The play itself lasted all of two seconds as each helpless Jayhawk lineman could only muster a WTH stare watching their quarterback engulfed in Whaley's ferocious paws. And, Diaz was able to beat back a successful four play stretch rushing only three linemen.

As mentioned, the big mistake was on the quarterback who should have called a timeout. However, the 9 yard loss pushed Kansas back to their 21 yard line forcing a 4th down punt. Texas drove 75 yards on the ensuing possession in three and half minutes ending in a Joe Bergeron TD to put the game clearly out of reach. 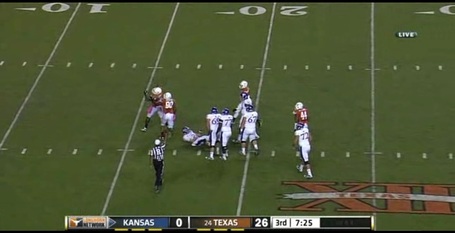 The camera work after the play was fantastic showing Whaley celebrating with his teammates, Manny Diaz sideline exhuberance, and Turner Gil jawing at his offensive line coming off the field wondering how many more days he will be head football coach at the University of Kansas.

Diaz is slowly revealing in snippet fashion how his untraditional attacking style can pay dividends. Experiences continue to build for the Longhorn front seven allowing exploitation of offensive weaknesses at opportune moments such as the one described above. The cumulative successes are increasingly putting the Longhorns in leveraged positions to disrupt and, in some cases, create game changing plays.

And to think we are just starting to see his strategies take off.