The Cards of Texas are Upon You! Find Out How to Win Some Below! 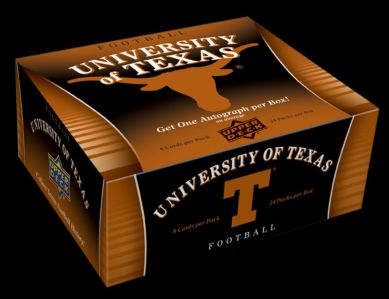 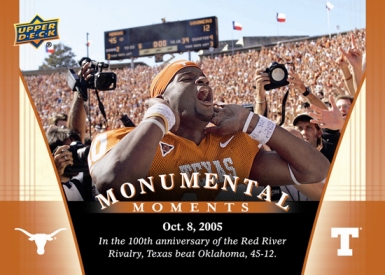 The Monumental Moments set highlights games and moments that will forever be lauded by all Texas fans, such as the first bowl in 1943, the 1970 Cotton Bowl win, Ricky Williams setting the career rushing record and, of course, the 2006 Rose Bowl. All-Time Alumni combines two or three greats with combos such as Colt McCoy/Vince Young and Vince Young/Ricky Williams/Earl Campbell. And, yes, those also have dual- and triple-autographed versions sure to make your Longhorns pants go crazy.

All-Americans is a 16-card insert set highlighting the years each featured player was named All-America. The National Champions insert features players and coaches from the four national championship teams. There also are dual and triple combo versions. How about a Mack Brown/Vince Young combo autograph, or a Darrell Royal/James Street?

More on the set, where to get the cards and how to win some from Upper Deck, after the jump.

The basic set and inserts sets also include autographed versions. There are a total of 192 Longhorn legends in the product. The cards are available in boxes of 24 packs with eight cards per pack, and Upper Deck says each box will include at least one autographed card. They can be found at sports card shops in Texas, including Sports Cards Plus in San Antonio, SMP Sports Cards in Grapevine, Nick's Sportscards in Dallas, Card Traders of Austin, Kenny's Collectibles of Austin and other locations.

The product can also be purchased at the Upper Deck Store.  Of course, we wouldn't ever dream of leaving our faithful BONers without a decisive advantage to get your hot little hands on these cards. The good folks at Upper Deck are offering up boxes to BON members. How do you win? Just leave a comment on this post to enter. There will be one grand prize of an autographed oversized Earl Campbell card! So, leave your comments below and you just might get some sweet hook 'em stuff to add to your collection. Commenting more than once will not increase your chances of winning, but by all means, comment as much as your little burnt orange heart desires. Winners will be chosen at random.

Oh, and enjoy the check list for the Memorable Moments set and the card gallery below.

James Brown
1996 (12/7/1996): "Roll left" , play that sparked the Longhorns to victory against Nebraska in the inaugural Big 12 Championship Game. Pass from James Brown to Derek Lewis.

Major Applewhite
2001 (12/28/2001): Major Applewhite throws for 473 yards for a come from behind victory over the Washington Huskies in the Holiday Bowl 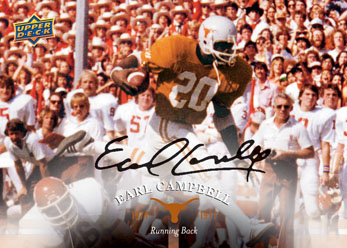 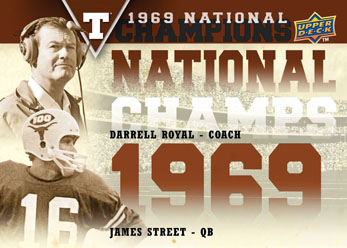 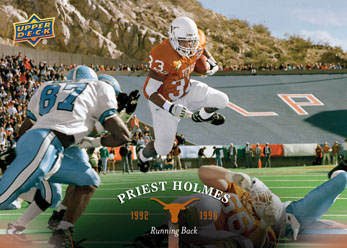