Rick Barnes is in year two of his effort to revamp his offense. Prior to the 2010-2011 season, Barnes spent time learning the offense used by former Utah Jazz coach Jerry Sloan. I have been studying Barnes' implementation of this offense. In October I wrote a two part piece on the major elements of Barnes' offense. Part 1 described the basic flex principles that Texas uses in one of their sets. Part 2 focused on the 1-4 set. Additionally, I also wrote a post describing the staggered screen frequently employed by Texas.

One element to the Texas offense that I haven't yet written about is a particular quick hitting side screen that Texas has been using extremely well this season to create easy baskets. This is a screen that is good for freeing up players like Sheldon McClellan and Julien Lewis. Texas has been using this screen a fair amount so far this season. I will show a couple examples of how it works after the jump, taking a few clips from the UCLA game.

This basic play is simple. A single screen is set on the wing for a player. Let's watch the play unfold below, using a clip taken from the Texas vs. UCLA game. Here you will see Sheldon McClellan working off of a screen on the wing. The play leads to a quick and easy score.

While this doesn't look like much, it is actually a pretty well conceived play. It is simple, but the little details are what makes it work. Let's take a look at it, trying to understand all of those details. In the photo below, we see the setup. Chapman is coming in to set a screen. This isn't going to be a particularly physical screen, but it will get the job done. While Chapman is moving to the screening area, McClellan will set his man up by making a slight move towards the baseline. 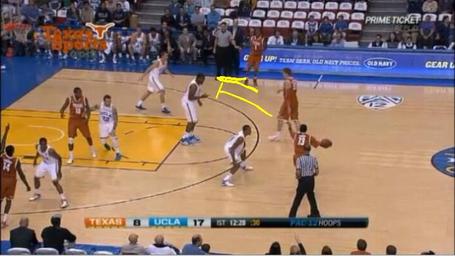 There is more to consider in that image above. I want to point out a few other details. This play works in part because it creates a two on two situation on one side of the floor. If the defense is able to commit a third man to help out, then it can become rather easy to stop. So that is why what is happening on the other side of the floor is also important. Note that Gibbs has the ball more on the near side of the court, meaning the screening action is taking place on the weak side. This forces the UCLA players guarding Brown and Holmes to defend their men. In basketball jargon, this is often referred to as "occupying the defenders." Basically, by spacing the floor in the way that they have, Texas is making it really difficult for a third defender to help deal with the weak side screen.

With things properly spaced, it is time to get to the screen. In the image below, Chapman has now moved into position to set the screen, and McClellan is running through it. This image is critical if we want to understand what is happening. McClellan's defender has two ways of going around this screen. He can attempt to go under the screen (following the yellow path) or he can chase McClellan over the screen (following the red path). Should he choose to go under the screen (the yellow path), McClellan's read will be to "pop" off the screen. Basically, he will stop running around the screen and receive a pass for what will likely be an open three point shot. McClellan is a pretty good shooter, so his defender makes what is probably a wise choice, instead deciding to chase him over the screen. In this case, McClellan's read will be to curl off the screen and cut to the basket. 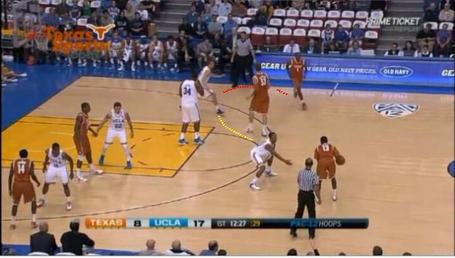 In the next image, we see McClellan receiving the ball as he curls off of the screen. He has an easy path to the basket. It is in part because of the defensive play of #34. (I am not going to name him, because I don't want his mother Googling this article.) Notice where this defender is looking. He seems to be staring off into the third row of the stands. It is hard to find examples of someone appearing to be this indifferent to playing defense in big time college basketball. Ben Howland shows admirable restraint in resisting the urge to run onto the court and punch his player in the face. 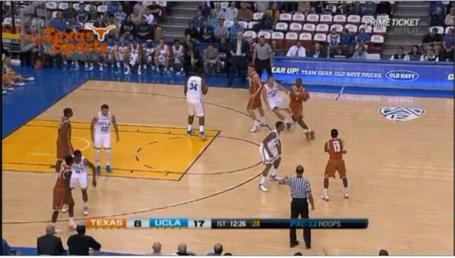 In the clip below, we see what happens if the man guarding the screener over commits helping out, instead of standing around and ignoring the play. This clip is also taken from the Texas vs. UCLA game. Before watching this clip, I want to draw your attention to something. These screens are being set on both sides of the floor. Again, this occupies the defenders, creating two on two opportunities on each side of the floor.

In this case, Holmes is setting a screen for Julien Lewis on the near side of the court. Again, notice the position of the defenders on the opposite side of the court. They are more or less distracted by dealing with their own screen, and they will not be around to help out. 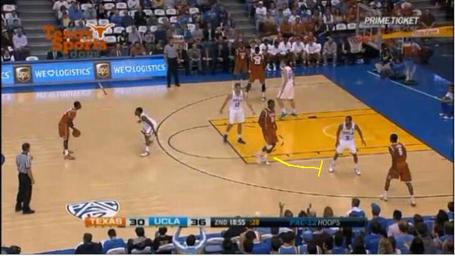 In the next photo, we see the image just as the screen is being set. Lewis' man is chasing him over the top of this screen, while Holmes' defender (indicated with the yellow arrow) is preparing to help. This helping defender is going to step out and deny the pass to Lewis. As he does this, Holmes feels his defender leaving him and cuts to the basket. Notice that the weak side helping defender (indicated with the red arrow) is distracted by the screening action on the opposite side of the court, and will not be around to defend the rim. Holmes gets a pretty easy bucket as a result. 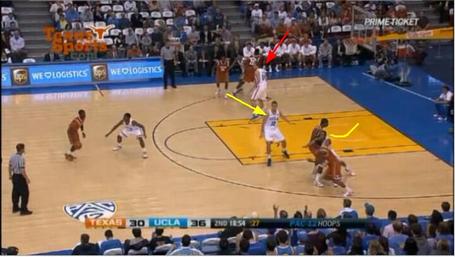 In this case, the defense gave up an easy score because the help was too aggressive. In the first example, the help was not aggressive enough (it was non-existent). So what is the right way to defend this play? Surely, this can't be some sort of unstoppable maneuver.

It is not unstoppable. Depending on what sort of approach the defense likes to take, there are several ways that the defense can prevent this from happening. Very aggressive ball-denying defenses will often have the defender attempt to beat their man through the screen. If done correctly, this can stop this screen in its tracks. When faced with this sort of situation on defense, Rick Barnes' teams at Texas have often opted for this approach. A second option is to defend this in more or less the manner shown in the photo above, but to have the help defender lay back and not try to deny the pass. This means that he can help and slow down the player curling, but can also recover to defend his man. Putting some pressure on the ball handler would also make it harder to make these passes. The defense might also be able to switch on this screen, although they would then have to live with the mismatches that switch created.

While the defense does have options against these sorts of screens, they can still be pretty difficult to defend. They will create opportunities for a wing player to catch the ball on the move and make a play. Many motion offenses run these sorts of screens repeatedly. It is hard enough to guard against one such screen like this, but it is really difficult to defend against many of them in a row. For a good example of an offense that uses repeated screens of this type, I recommend that you catch a Vanderbilt game.

This basic screening action fits well with many of the other things that Rick Barnes is running with Texas. Much of the stuff that Texas runs is built off of reading off-ball screens. Once players learn how to do it in one set, they can apply it to other sets as well.