Share All sharing options for: Texas Longhorns Basketball: Inside the Numbers, Week 5

While the Texas Longhorns are off to a very good start of the season, there has been a lot of frustration among fans related to the difficulty of seeing the games on TV. This is, of course, due to the fact that so many of these games have been on the mythical Longhorn Network. Well, cheer up folks, because from this point forward the vast majority of the Texas basketball games will be on a channel that you actually can find on your television. Don't let your frustrations with the Longhorn Network boil over. Games against Temple and North Carolina will soon be coming to a TV set near you.

After the jump, we review this week's games, as well as take a look at the ways that each player scores in the Texas offense.

Texas overwhelmed Texas State on both ends of the court. The true shooting percentage differential tells you just about everything you need to know about this game. Texas State did manage to get a few extra shots, but for once we cannot blame this on Texas' defensive rebounding. The Texas defense rebounded 70% of the available misses, which is very good. Texas State managed 14 offensive rebounds only because they missed so many shots. If there was one negative for Texas, it was that their turnover percentage was a little bit higher than you would like to see.

Rick Barnes was able to get minutes for everyone on the team. Often, I like to plot true shooting percentage vs. the percentage of team shots taken by each player. The plot for Texas vs. Texas State is shown below. Generally, any true shooting percentage greater than about 0.55 is what I consider to be pretty efficient. Notice just how many of the Texas players managed to shoot at this level. 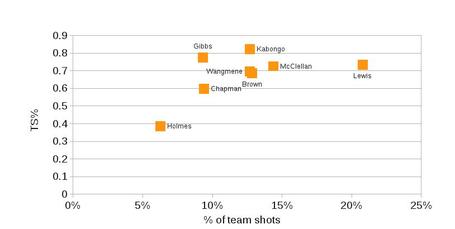 I am always looking for new ways to slice and dice the data related to Texas basketball. I have recently started messing around with game play-by-play data. Play-by-play game logs are available at a variety of sports sites, such as espn.com or texassports.com. These logs contain a lot of information. With a bit of programing, it is possible to analyze these game logs and extract some really interesting stuff that you cannot get from the box score alone.

As I start to get my feet wet with this sort of analysis, I thought it would be interesting to look at the types of shots that each player on the Texas roster was getting. Play-by-play logs generally classify field goal attempts as: dunks, layups, two point jump shots, and three point jump shots. With the play-by-play data I can calculate the distribution of these shots for each player, their shooting percentage on each type of shot, and the percentage of their made shots of each type that were assisted. I have done this for each of the players on the Texas Longhorns. I have also attempted to roughly divide them based on their role in the Texas offense. The data are through the Texas State game.

It makes the most sense to start with J'Covan Brown. About 80% of Brown's field goal attempts are jump shots, with the remaining 20% being shots at the rim. J'Covan Brown is one of two Texas players who have the ball much of the time on offense. He is not getting to the rim very much, but his ability to shoot the ball allows him to make very good use of his jump shots. Also of note is that less than 50% of Brown's made three point shots have been assisted. Compare this with McClellan and Lewis, who have been assisted on over 90% of their three point shots. Many of Brown's three point shots have not been of the standard catch and shoot variety, but rather are shots that he is creating for himself.

Myck Kabongo clearly gets a higher percentage of his field goal attempts at the rim than Brown does. Of the Texas players, only Chapman, Wangmene, and Bond take a greater percentage of their field goal attempts at the rim than Kabongo does. When he can't get to the rim, Kabongo has not yet been very effective as a jump shooter. Much of Kabongo's offensive value comes from his passing. Kabongo and Brown together account for about 70% of Texas' assists so far this season, with Kabongo having around 40% of them.

Sterling Gibbs has only taken 17 field goal attempts, so we probably shouldn't read too much into the table above.

Sheldon McClellan is another guy that can shoot. Similar to Lewis, he takes a significant fraction of his shots from three point range, and nearly all of his made three point shots have been assisted. And like Lewis, the majority of these assists come from either Brown or Kabongo. This is where the similarities end. While Lewis does the majority of his damage from the three point line, only about 35% of McClellan's points have come from three. McClellan also excels at finishing around the basket, as demonstrated by his high field goal percentage on layups and dunks. These data also show that about one third of McClellan's field goal attempts occur near the basket. McClellan has also shot 30 free throws this season, whereas Lewis has only attempted 6.

Alexis Wangmene's work on offense has been one of the more pleasant surprises this season for Texas fans. While Wangmene isn't doing anything spectacular on offense, he is finishing near the rim at a very high rate. 70% of his field goal attempts are layups or dunks, and he is scoring on them 78% of the time. A very high percentage of these scores are assisted, which is as you would expect. Wangmene doesn't really create many scoring opportunities for himself in the offense. His unassisted layups often come off of offensive rebounds.

Jonathan Holmes' shoots a higher percentage of jump shots than the other Texas big men. Roughly 60% of his field goal attempts have been jump shots. While his three point percentage is pretty low right now, I expect that we will see it improve. Holmes has a really nice shot, which you can see from his two point jump shot percentage (61.5%) and his free throw percentage (82.5%).

Chapman has finished 100% of his field goal attempts near the rim. Chapman has 7 dunks on the season, 6 of which were assisted by J'Covan Brown. Hopefully Chapman was able to draw Brown's name in the secret Santa exchange this year, so that he can pay him back. A little bit less than half of his attempts have been jump shots, and most of these attempts have not gone well. But when Chapman has a chance at the rim, he is excellent.

Similar to Gibbs, Bond has only attempted 19 field goals so far. So we shouldn't go overboard in trying to interpret this table.

I hope to make more use of play-by-play data as the season progresses. I will happily take suggestions of things that you might be interested in looking at that I can get at with play-by-play data. I can't promise that I will follow through on all (or even any) of them, but I would love to hear your ideas.