Texas faces its toughest test of the season with this week's game against the North Carolina Tarheels. I was originally going to include this preview as a part of my weekly Inside the Numbers column, but it just was too long. I probably went a little crazy on this, but hey, it is North Carolina. It is worth going a little crazy.

I used play-by-play data from 9 of North Carolina's first 11 games to help create this preview. Note that the play-by-play data did not include results from North Carolina's opening game against Michigan State, as these data weren't available from espn.com (my data source). Perhaps they can't have computers on aircraft carriers. And I built my database prior to their game last Saturday against Appalachian State, so the results of that game are also not included in the play-by-play statistics.

Let's see what we can learn about North Carolina, after the jump.

Tempo. Whenever you talk about North Carolina you have to address tempo. North Carolina tries to push the ball up the floor at every opportunity. They are averaging an estimated 75 possessions per game. As a point of comparison, Texas averages around 68 estimated possessions per game. Using play-by-play data, I took all of North Carolina's possessions and found the ones where they attempted a field goal before anything else happened (a foul or a turnover). In these possessions, we can determine how long it takes from the time they get the ball until they take their first shot. Below I plot a histogram of these times for possessions that start with a defensive rebound, a steal, and a made basket by the opponent. 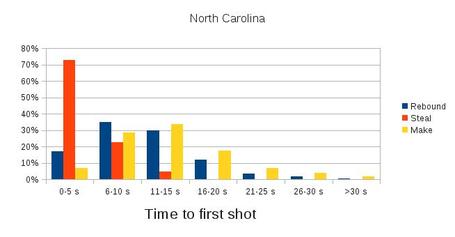 As a point of comparison, here is the same plot for Texas. Texas plays pretty close to the NCAA median pace, so I imagine their distribution of time to the first shot is pretty similar to what you would see if you studied the NCAA as a whole. 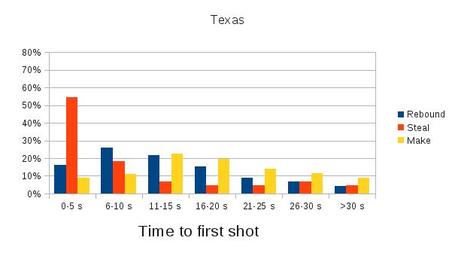 The players. To take a deeper look at North Carolina, let's dive into how some of the various players do. The table below shows the advanced statistics results through their first 11 games taken from sports-reference.com for their top 7 players.

North Carolina has some rather dangerous offensive players. Using the play-by-play data, we can understand a little better how they can hurt teams. Let's look at their key players.

You wouldn't tell it from his shooting numbers, but Kendall Marshall is a big part of what makes the North Carolina offense go. He is a fantastic passer, with 115 assists through his first 11 games. Yes, that is right, he averages more than 10 assists per game. He excels at pushing the ball up the floor, and passing it ahead on the break. When you watch the Texas vs. North Carolina game, pay attention to how quickly North Carolina gets the ball into Marshall after a made basket, and how quickly he then passes the ball up the floor to one of the wings or a big man. Marshall has assisted on roughly half of Harrison Barnes three point shots, 58% of Reggie Bullock's three point shots, 30% of P.J. Hairston's three point shots, 50% of John Henson's dunks and layups, and 31% of Tyler Zeller's dunks and layups.

It is interesting the type of player that Harrison Barnes has been this year. He gets around 25% of his shots at the rim. This means he attempts field goals near the rim at a slightly higher rate than Julien Lewis. Barnes has become an absolutely deadly catch and shoot player from three. He has made half of his attempts from three through his first 11 games, with about 85% of these made threes coming off an assist. Barnes hasn't turned into the great offensive creator that some expected (his assists totals are also very low), but if he has his feet set he can be a dangerous shooter.

Speaking of dangerous shooters, Hairston and Bullock scare the crap out of me. If Marshall is finding Barnes, Bullock, and Hairston in transition for open three point shots, it will be a long evening for Texas.

Strickland is different from the other North Carolina guards. He clearly doesn't have the green light, with zero three point attempts through his first 10 games. Judging from is career 24% three point shooting percentage, not hoisting threes is probably the right decision. He also isn't a particularly good free throw shooter, at 68% for his career. And yet, despite this, and despite being only 6-3, he is shooting nearly 55% from the field. He does this by getting to the rack.

Prior to this season, John Henson was known as a really good shot blocker and rebounder. He really has taken a step forward offensively this season. I have watched him play a few games this season, and he seems to have developed a somewhat polished low post game. He has a decent jump hook shot, which is real trouble for opponents when it is falling. Henson has done a surprising amount of his offensive work this season away from the rim, either facing up or in the low post.

What does Roy Williams want in a big man? Well, he has a history of liking guys who can run the floor. And few big men run the floor better then Tyler Zeller. He is the fastest seven footer from end to end that I have seen in a long time. Maybe David Robinson fast -- not that he is anywhere near as good as Robinson. Zeller running from end to end as fast as he does puts pressure on the defense in two distinct ways. First, it requires you to get back on defense to guard the quick post entry pass, and there is almost no better time to feed the post than on the fast break. Second, it is often times much easier to get offensive rebounds in transition. So even if the ball doesn't go in to Zeller on the break, he has a good opportunity to pick up second chance points. Zeller and Henson both work hard on the offensive glass, and are the main reason that North Carolina rebounded 37% of the available offensive rebounds through their first 11 games.

If there is one criticism of Zeller's game, it is that his FG% on layups is not as high as you would like to see for a seven footer.

What will it take to beat North Carolina? I am not a big fan of "keys to the game." While we can go into a game expecting certain things to happen, we often find that things don't play out as we had anticipated. But if I were to take a crack at identifying three things that Texas could do to help their chances of pulling off the upset, they would be:

1. Emphasize transition defense. It is very important to find all the shooters and to find Zeller in transition. North Carolina is fantastic in transition, but their offense can be pretty ordinary in the half court. If Texas doesn't sprint back on defense after every shot (made or missed), then North Carolina will run them off the floor. If Marshall can make those long passes up the court, Texas is in trouble. If he has to dribble all the way up the floor, then half of the battle has already been won.

2. Put a body on Zeller and Henson. These two guys can really hurt Texas on second chance points. Particularly in the transition game. All four of the Texas big men will need to make sure they are always bodying up on one of these guys.

These things are certainly easier said than done. You can't really simulate the speed and size of someone like Zeller in practice, unless you put Clint Chapman on roller skates. With Texas being so thin inside, I don't advise this. But with an extra day to prepare for this game, Texas at least has a puncher's chance.