The Cardinal defense held the Golden Bears to a field goal after Maynard marched Cal down the field on a long drive to keep Jeff Tedford's team from going up by a touchdown early in the second quarter.

A 21-yard kickoff return from Texas product Ty Montgomery gave Andrew Luck and Stanford the ball with a long field.

Stanford lines up in a power-running formation that includes zero (!) wide receivers, instead opting for a smorgasbord of H-backs and tight ends. Four, to be exact. In response, Cal uses four defensive linemen, a rarity for a 3-4 defense. 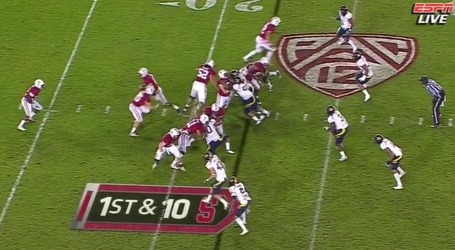 Stanford runs Power O left. Notice that the weakside defensive end to the top of the screen has fallen in his attempt to slow down the left tackle as he tries to get to the second level and block DJ Holt, no. 3 in the middle of the screenshot. 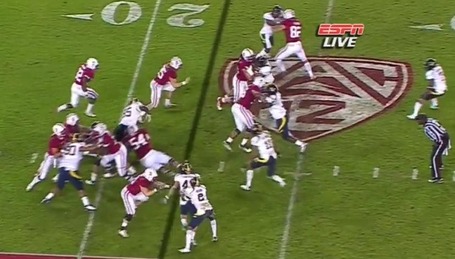 The pulling guard nails his block pulling through the hole, while the left tackle gets to the linebacker Holt. Since the defensive end fell down in the hole, the fullback can lead through all the way to the free safety, the last player with a legitimate shot at stopping the Stanford running back, who needs to do nothing over than not fall down for a big gain. 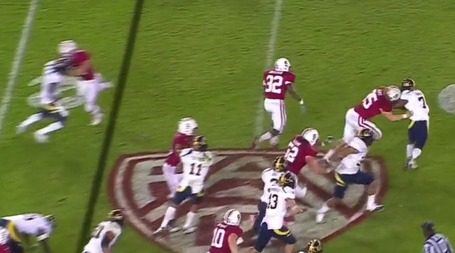 The fullback makes contact with the free safety, ensuring that the running back only has to bounce the run outside. 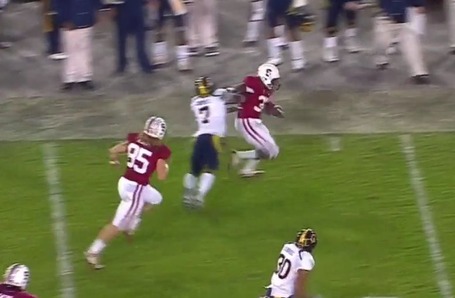 The fullback doesn't get a great block, so the free safety separates and manages to knock the running back out of bounds after a 21-yard gain.

Well, this is the type of play that Mason Walters' grandma could have picked up about 10 yards, providing she could at least hit the hole hard. Not that difficult, granny, as it isn't even a zone play. Just follow the blockers.

On a more serious note, the major takeaway here is that despite the fact that Cal has been tough to run against this season, Stanford was able to get a blackboard play -- a play executed exactly as a coach might draw it up on the blackboard -- despite running it from an obvious formation.

It was something of a problem for Cal during the game, as Stanford was able to pick up most of the team's 150 rushing yards in the middle of the game, with several blackboard plays such as this one. Without cheating the middle linebacker into the hole a bit early, the rest of the Golden Bears had some issues beating blocks, particularly at the second level, which speaks highly of the Stanford offensive line.

Concern about being able to stop this type of play made Cal susceptible to the play-action pass, which accounted for most of the yards for Stanford on the positions following this second-quarter touchdown drive that created enough separation that Cal couldn't rally late.

What it means for Texas

Earlier in the season, this series looked at another blackboard play on the Power O, a big run from Malcolm Brown that was close to going the distance. Of course, that play came against perhaps the worst BCS defense in the country, so it would have been a terribly poor reflection on the Texas offensive line not to have had one or several such plays against the Jayhawks.

The overriding point is that even though Cal will be tough to run against given the numbers this season, it won't be impossible. As always, the issue on man plays like this is that one missed block, especially playside, can quickly derail the play. Not coincidentally, the big uglies up front for the 'Horns have struggled this season with missed assignments, even against a pretty average front like Baylor.

Along with that issue, the other concern is that Stanford probably has a better offensive line than the Longhorns, so just because David Shaw's group was able to execute at a high level, history suggests it will likely be more difficult for for the Longhorns.

So even though running more zone plays might help the Longhorns put more pressure on the gap responsibilities of the Cal defense, this play suggests that it's not out of the question for Texas to win a few of these battles.

The success on this particular play could be part of the reason that Mack Brown is experimenting with Chris Whaley on the offensive line. It gets another big body on the line and sets up the play-action pass to Whaley, which was extremely successful for the Cardinal. A jumbo package for Texas could help open up both the running game and the passing game.