Share All sharing options for: Texas Longhorns Basketball: Inside the Numbers, Week 4

We use the phrase "shoot the lights out" frequently. So rarely does it actually happen. Last Saturday, the Texas Longhorns basketball team visited UCLA, and the game was delayed after the arena went dark towards the end of the first half. Texas also shot the ball very well. This leads us to the classic question: causation, or merely correlation?

Myck Kabongo continues to take positive steps. J'Covan Brown continues to play well. It is quite possible that come March, Texas will have one of the better offensive backcourts in the country. Mix in a healthy dose of Jonathan Holmes (quickly becoming one of my favorite Longhorns of recent years), and it is not unreasonable to expect that Texas will be a team that no one wants to play.

Of course, the Longhorns still have to fight their way through a very tough schedule, with games against Temple and North Carolina before diving into conference play. Once the conference starts, wins will be hard to come by. The Big 12 is going to be very good this year. And Texas will have to play everyone twice. That means two games against Kansas, Missouri, and Kansas State, as well as Big XII South rivals Baylor and Texas A&M. Also, don't sleep on the Oklahoma Sooners. They are 5-1, and Lon Kruger knows what he is doing. Oklahoma State will not be a pushover. For what it is worth, the best shooter in the Big 12 may be Iowa State coach Fred Hoiberg. I guess that isn't worth very much.

With such a tough schedule ahead of Texas, getting wins right now is very important for getting into the NCAA tournament. That is why this week was very encouraging. After the jump, I will take a look at this week's games, continue to harp on Texas' rebounding troubles, and take a detailed look at the Texas defense through the first seven games.

UCLA struggled to play anything resembling actual defense, and Texas made them pay. Often on offense it is best to take what the defense gives you, so it is really nice that UCLA gives you pretty much everything. Texas had a robust 0.613 true shooting percentage. What makes this more remarkable is that most of this high true shooting percentage came from shots from the floor. Texas only attempted 7 free throws for the game. Texas shot 37% from three point range and 65% from two point range. This was pretty much how we expected things to come out.

UCLA was not exactly lighting things up offensively. Their true shooting percentage of 0.444 was pretty terrible. A lot of credit for this goes to the Texas defense, which I will discuss in greater detail in a section below. UCLA was bad from the free throw line, going 10-20, but even if they had gone 15-20 from the line, their true shooting percentage would only have increased to 0.481.

Now let's talk a little bit about the rebounding. Texas out rebounded UCLA for the game by a margin of 34-30. Despite this Texas was still poor on the defensive glass, allowing UCLA to rebound 44% of their misses. Texas rebounded 48% on the offensive boards, which is quite good. Texas continues to struggle with defensive rebounding. Be careful when interpreting raw rebounding margins, as they can be very deceiving in games where one team misses a whole bunch of shots.

I want to look a little bit more closely at the individual player rebounding percentages. Here are the defensive rebounding percentages of the five Texas starters. These numbers are estimates of what percentage of available rebounds that each player tracked down while they were on the court. Jonathan Holmes continues to be the best defensive rebounder on the team. Kabongo is also tracking down a decent number of rebounds. After several good games in a row, Wangmene was once again not really doing his part to secure the defensive glass.

We can also take a look at the non-starters. Bond, Chapman, and McClellan are all making positive contributions to the rebounding effort when they are on the court.

Texas struggled a bit with turnovers against UCLA. While a 20% turnover percentage is not a disaster, it is not very good. It is worse than what we have come to expect from Texas. Chapman seemed to particularly struggle, turning the ball over 4 times.

I want to highlight a few things about the offense. To understand where shots are coming from, and how efficient each player is with his shot, I like to plot true shooting percentage vs. the percentage of team shots taken by each player. The plot for the UT-Arlington game is shown below. So far this season, Texas' two most important and efficient scorers (based on a combination of efficiency and volume of shots) have been J'Covan Brown and Jonathan Holmes. Brown and Holmes both had rough nights shooting the ball. Brown went 1-7 from beyond the three point line -- this is going to happen from time to time. McClellan, Kabongo, Lewis, and Wangmene all had good games from a shooting efficiency standpoint. McClellan was fantastic, going 8-11 from the floor, including 4-6 from three point range. McClellan has an outstanding stroke, and I think we can expect more games like this from him. 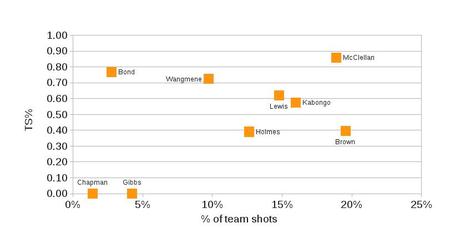 Last week, I spent some time looking at the Texas offense. This week, I wanted to talk about the defense so far this season. Texas is currently good, but not great, when it comes to team defense. They were allowing 97.5 points per 100 possessions, as of Sunday December 4. Kenpom.com rates Texas' defense at #64 in the country. (Kenpom.com adjusts the rankings for the level of competition.)

As of Sunday, Texas' opponents had a true shooting percentage of 0.475. When we compare this with the NCAA median of around 0.53 (for the 2010-2011 season), we can say that Texas has done well when it comes to holding down opponent shooting efficiency. So there is the good. The bad is that Texas has allowed their opponents to shoot 1.02 shots/poss. (I generally refer to FGA + 0.475 x FTA with the term "shots.") The 2010-2011 NCAA median for this was 0.967 shots/possession. Texas is allowing a large number of extra shots. These extra shots are costing Texas a lot of points. If Texas was giving up the median level of shots per possession, they would allow roughly 5 fewer points per 100 possessions. This would make them close to a top 10 defense.

There are two ways that you can reduce your opponent's number of shots per possession. You can turn your opponent over, and you can protect the defensive glass. Rick Barnes' teams rarely excel at forcing turnovers, wisely (in my view) emphasizing other aspects of defense. This year, the Longhorns' opponents have turned the ball over in approximately 21% of their possessions, which is actually a fairly high rate for Texas (kenpom.com has Texas near the NCAA median in opponent turnover percentage).

One thing lacking from the analysis of the previous paragraphs is that it ignores Texas' competition. It is entirely possible that Texas could do well in defensive shooting percentage simply because they have played poor shooting teams. We can try to control for this by looking at how Texas' opponents have played overall, as well as how they have played against Texas. The key data are in the table below. In it, I list the true shooting percentage and shots per possession of each Texas opponent in their game against Texas. I also show the season averages for each team, along with the differences for each statistic between the results in the Texas game and the season averages.

Now we need to look at the shots/possession. Texas has allowed all but two of their opponents to get more shots per possession then their season average. And I worry that the NC State game was affected by the relatively high proportion of free throws that were taken by the Wolfpack (free throws don't provide much opportunity for offensive rebounds). On a per game average, Texas has raised their opponents shots per possession by 0.04. A swing of 0.04 shots per possession works out to roughly an extra 4 points per 100 possessions. So while Texas' shooting defense is taking away 10 points per 100 possessions from their average opponent, they are giving back 4 of these points by allowing the extra shots.

All in all, the Texas defense has been good. Better rebounding could make it great.