Want a chance to win some sweet Longhorns autographed collectibles of Colt McCoy, Jordan Shipley and Sergio Kindle? Of course you do. Read the post below to find out how!

The sports card hobby exploded in the early 1990s. People started realizing there was real value to these little gum-stained cardboard collectibles. For me, it was the perfect storm. I was a young lad living in Dallas, playing football. The Dallas Cowboys were winning Super Bowls. Sports card and memorabilia shops were popping up all over town. My mom spent several Saturdays wheeling me all over Dallas to shops and weekend shows as I tried to grab all of Emmitt Smith and Troy Aikman's rookie cards (still got 'em all).

The hobby is very specialized these days. However, other collectibles and memorabilia may be bigger and more available than ever. My passion for sports collectibles that was born in the early 1990s remains. I've always collected Longhorns players, and burnt orange items have become the focus of my collecting efforts in recent years.

Many hook 'em fans reading this post are collectors and don't even realize it. Mini-helmets, autographed footballs, old football cards of Bobby Layne or Tommy Nobis - if you have any of these items or anything of the like, you are a collector. Accept it. 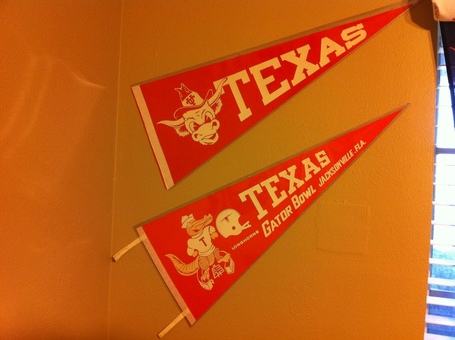 The top pennant is from the late 1960s. The one on the bottom is from the 1974 Gator Bowl. Texas lost that game to Auburn, but I bought the pennant because it was from Earl Campbell's freshman season. He rushed for 91 yards in that Gator Bowl. The dealer I bought these from specializes in pennants, programs, buttons and banners. I would always see him at national sports collectors shows and finally looked though his stuff at the Super Bowl NFL Experience show in Jacksonville. I've bought several collectibles from him since. These two pennants are now in my son's room. 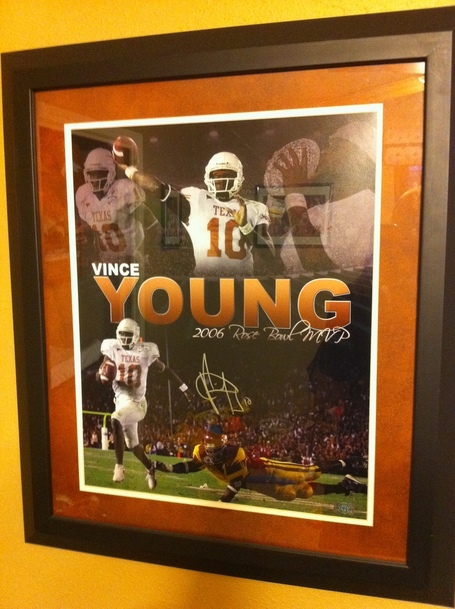 When I was an editor for Beckett Media we would set up a booth to sell our magazines and books at the annual Super Bowl NFL Experience show. Our booth at Super Bowl XLII in Phoenix (Glendale) was right next to the booth of a sports collectibles dealer from the Midland-Odessa, Texas, area. This sweet autographed photo collage of Vince Young was hanging on the side of the booth that was facing us. It was begging me to take it. It has four photos of Young from the greatest college football game of all time. It was just staring at me for hours, already framed, looking beautiful. I had to have it.

After a few days I made a trade with the guy and gave him some lithographs we were giving away with paid subscriptions. When I got back to the hotel room I put it in my suitcase since we were flying home the next morning. There was just one problem: I could not zip up my suitcase. The frame was just a little too big.

So, I made a midnight run to Wal-Mart and grabbed a used cardboard box from an overnight stock boy and bought some packing tap. I broke the box down, wrapped and tapped it around the frame. I checked it onto the plane along with my suitcase. It made it home safe and sound. 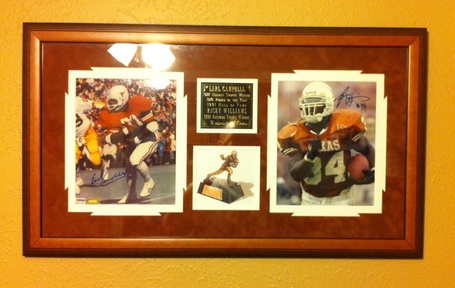 Ricky and Earl deserve the best. I had these autographed photos for a while and was searching for the proper matted frame to give them a home. I was at a collectibles show in Arlington and saw this frame already created for 8x10 photos of Ricky and Earl. There is an image of the Heisman Trophy in the middle along with a plate recognizing them as Heisman winners, and Earl as 1978 Rookie of the Year and a Hall of Famer. It was meant to be. 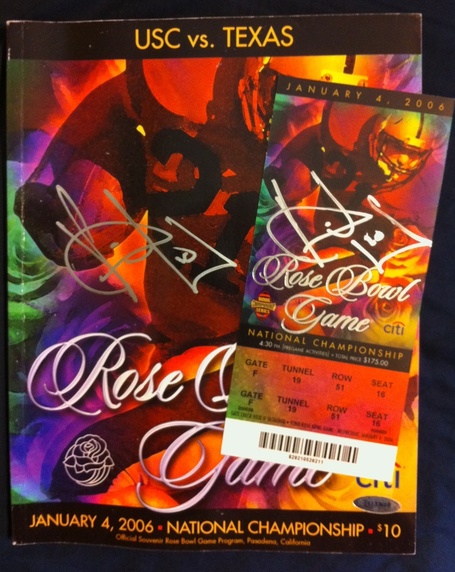 One of the greatest regrets of my 31 years on earth is not going to the 2005 National Championship game. But I did acquire a game program and ticket from someone who went. During the summer of 2006 an autograph promoter I know was doing a signing with Vince Young, so I sent him the program and ticket, along with a mini-helmet (see below) to get signed. They came back looking sweet, signed in a metallic-silver ink. I've been meaning to get them framed ever since. 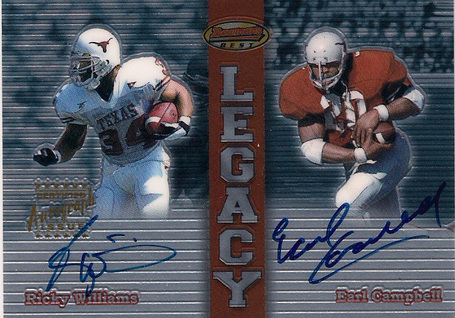 I have more sports cards than I can count. So many of them bring back a lot of good memories, but this one just might be my favorite. It's the only autographed card of Ricky Williams and Earl Campbell (my two favorite Longhorns of all time) picturing both Heisman winners in their Texas uniforms.

It's just beautiful, isn't it? 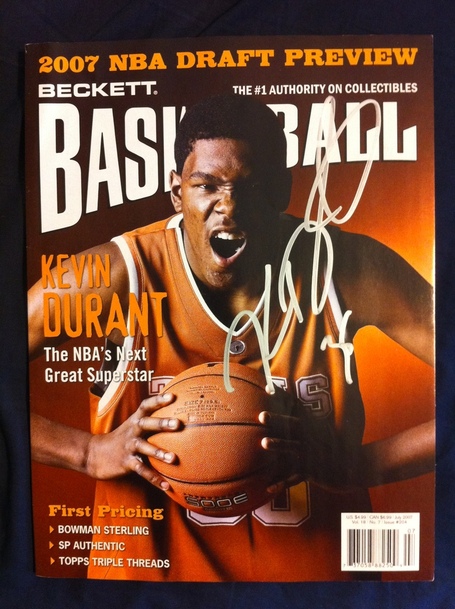 During my time as editor of Beckett Basketball, I attended several NBA media events and photo shoots. I met Kevin Durant at the rookie photo shoot in New York. He was on the cover of that month's issue, in his Texas uniform. Breaking all media etiquette, I had him sign a few copies for the folks back home who worked on the magazine with me. I even got a picture of him holding the magazine. 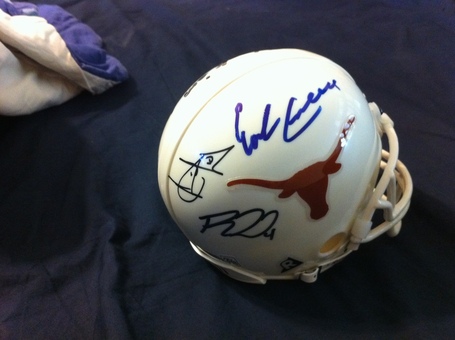 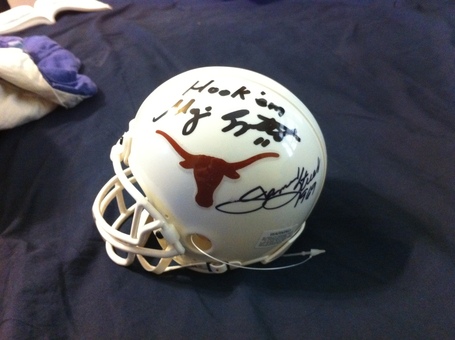 Ah, my longest on-going hook 'em collectible project. This mini-helmet has autographs of Vince Young, Earl Campbell, Major Applewhite, James Street and Roy Williams. The only one I didn't get in person is the Vince (see above). I'd love to add Ricky Williams, Colt McCoy and Cedric Benson. Did I even need to write that? Oh, and if any of you out there who can help me with that, shoot me an email. 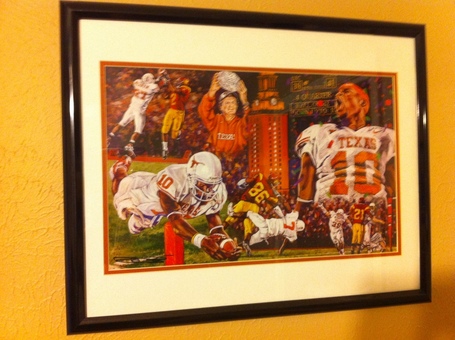 My parents bought me this for my birthday in 2006. The original was painted by Robert Hurst, the official artist of the Texas Sports Hall of Fame. The collage has six wonderful scenes from the 2006 Rose Bowl, with the UT tower in the center lit up with "1." Michael Griffin's interception at the goal line, Vince's diving touchdown, Michael Huff taking down Dominique Byrd with one hand, Vince celebrating amid a tornado of confetti, Mack Brown holding up the National Championship trophy - they all create a work of art that captures the greatest college football game of all time. 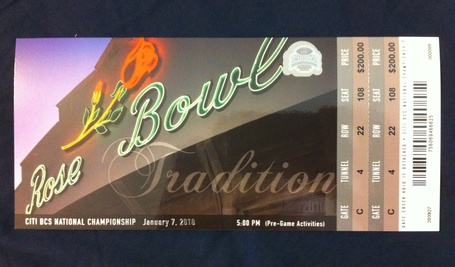 As I said earlier, I will always regret not going to the 2006 Rose Bowl, so right when I watched Hunter Lawrence send that ball through the uprights in the Big 12 Championship Game, my dad and I immediately started exploring all avenues to secure tickets to last year's National Championship.

We lucked out like an Aggie at a cousin-kissin' contest.

We know someone who works for the Big 12, so we put in a request for two tickets. She told us that chances of getting them would be slim to none. They got tickets early and started fulfilling requests earlier than anticipated. Ours was in early enough, and we secured two tickets at face value. 44-yard line. Row 22. Sweet.

We got there early, walked around and just took in the whole scene. I took a ton of pictures and even managed to sneak in a zoom lens. Despite the result and the bad thing that happened early in the game, it was without question the greatest sports experience of my life. It was just awesome. This ticket is definitely something I will pass on to my kids.

OK, so those are my favs. Leave a comment and picture below of your favorite Texas collectibles. Prizes will be awarded to our six favorites. Prizes include autographed photos and football cards of Colt McCoy, Jordan Shipley, Sergio Kindle and others. The grand prize is the Colt McCoy autographed 8x10 photo.