We'll get to Florida in a moment. But first we wanted to share with you the pretty sweet new uniforms Texas will be unveiling Saturday in the College World Series in Omaha. OK, they essentially look the same; the logo hasn't been changed or anything like that. Still, the Nike Hypercool design is pretty sleek and theoretically will keep the Longhorn players cooler than traditional fabrics. According to Nike communications rep Cindy Hamilton, the jerseys are 25% lighter than Texas' old jerseys and the pants are 43% lighter.

These ubiquitous Nike "new uniform" pictures all make the threads look super sweet, but even with that grain of salt we think these will be an improvement. So now you'll know why the Texas unis look somewhat different than they did in the super regional when they take the field against the Gators. 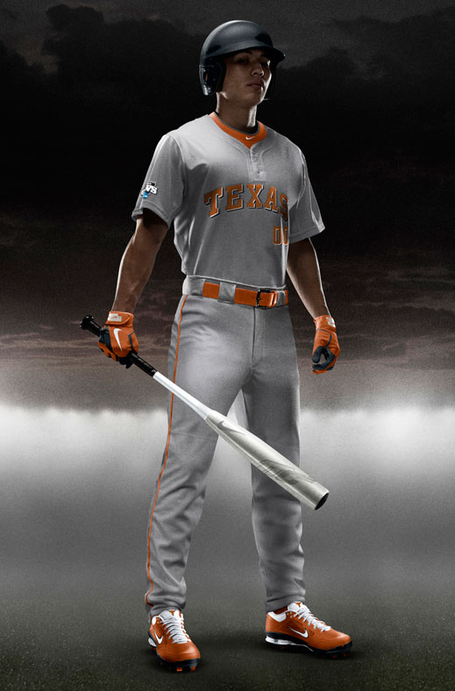 On to the Gators: As has been mentioned many times in this space, the first two games in Omaha are crucial. Win them both, and you're in prime position to play for the title. Lose either, and it's the losers' bracket for you. We have obviously seen that this Texas team is not scared of the losers' bracket, but it wouldn't break our hearts to see them do it the easy way this time.

Problem: the easy way will not be easy in any way, shape, or form. It starts Saturday at 6 PM CDT against the vaunted Florida Gators, whose home super regional win was every bit as exciting as Texas'. The Gators had to overcome a very late two-run deficit against SEC foe Mississippi State to win Game Three in Gainesville, and they did it with the help of back-to-back leadoff walks by the MSU reliever followed by a monster three-run bomb to take the lead. That homerun, one of five in the game for UF, was courtesy of Daniel Pigott--who had another one earlier in the game.

That's what Florida does; they hit homeruns, and they hit a lot of them. Along with Pigott, the Gators have gotten fantastic production at the plate this postseason from left fielder Tyler Thompson, first baseman Vickash Ramjit, and third baseman Cody Dent. Dent's success is particularly troubling, as he hit below .200 during the regular season but is over .280 during the postseason. He is the best evidence you can find that Florida's offense is hitting on all cylinders coming into the CWS. And we haven't even mentioned their two best hitters yet: all season, the Florida attack has been paced by right fielder Preston Tucker (.314 BA, 14 HR, 68 RBI, .553 Slg) and catcher Mike Zunino (.376, 18, 66, .686).

Oh, and they also pitch. Thanks to some statistical compilation work by TXStampede, we can give you some good news about the UF pitching staff: they have the second-highest team ERA in the tournament. The bad news? They still have a 2.97 team ERA. This College World Series, more than any in recent memory, is going to be all about pitching. That's due to the combination of great talent on the hill and, of course, the new bats reducing overall production.

Florida's team numbers are somewhat inflated by a sometimes-shaky bullpen; ace Hudson Randall will be an incredibly tough guy for Texas to get to. There's a slight possibility that Florida coach Kevin O'Sullivan will take a risk that Texas' batting lineup can't score off his second starter Brian Johnson, but we doubt it--especially because he hasn't pitched since sustaining a concussion in the conference tournament. Johnson and Sunday man Karsten Whitson are both extremely talented hurlers as well, but the Longhorns will almost certainly see Randall. The sophomore righty has a 2.29 ERA and 62 strikeouts in 110 innings pitched. Worse, he has walked only a dozen batters all year. Augie ball depends on getting some guys on through patience at the plate, so Texas will have to hope the home plate ump is calling it close. That's especially true since the Gators don't help you out with many errors either, as they sport a .974 fielding percentage.

As alluded to above, the one Achilles heel on this Gator squad may be the bullpen. It's not exactly problematic, but they do lack a shut-down reliever. If Taylor Jungmann can keep it close long enough for the offense to chase Randall, they'll have a chance to get on the board against Florida's backup arms.

What's that? A prediction? We got the sub-regional kind of wrong, though we picked the winner properly. And we called "Texas in three" for the super. So here goes for the College World Series: we just don't see Jungmann losing three in a row. As GoBR rightly pointed out earlier this week, TD Ameritrade Field will play even longer than Rosenblatt; that is probably to Texas' advantage, especially in this one. Jungmann and the wind will keep Florida's long flies in the ballpark, and the offense will find a way to manufacture just enough runs to get the win. Texas moves to 3-0 all-time against the Mighty Gators, with all three games having been in Omaha.

We will offer no guess on what happens after that; we may have already said too much. First pitch is less than 24 hours away on ESPN; we will have an open thread for you here during the Vandy-UNC game and, of course, another one for Texas-Florida. Hook 'em!