Just how good do you have to be to win an NCAA basketball championship?

Share All sharing options for: Just how good do you have to be to win an NCAA basketball championship?

The NCAA basketball tournament sometimes feels like a total crapshoot.  But with all of the crazy things that happen, we often lose sight of the fact that the winner of the tournament almost always comes from a handful of the very best teams.  Let's dig into this a little more, after the jump.

First, we need some sort of available and objective measure to use to identify and rank the best teams in a given season.   After that, it is a simple matter to compare these rankings with the outcome of the NCAA tournament.  I am a big fan of the methods used by kenpom.com, but unfortunately the kenpom ratings only go back to 2003.  To do this right, I want to be able to go back over a number of seasons, in order to get more data.  So instead of using the kenpom ratings, I will be using the so called "simple rating system," available at sports-reference.com.  This method can be used for pretty much any sport.  A good explanation of it is here.  This system, abbreviated SRS, incorporates how well a team does, as measured by the average point differential per game.  It also incorporates the strength of schedule of a team in a fairly seamless way.  All of the math behind this is simple and intuitive, if a little tedious.  It just requires solving a system of linear equations simultaneously, which is easily done with a computer.  SRS is a number that attempts to estimate how many points per game a team is above or below the average.  In our case, the average covers all of Division I basketball.  In the 2010-2011 season, the team that was closest to the average was Hofstra.  Using sports-reference.com, it is possible to sort teams in a given season by SRS, giving an easy to get at ranking for each team.

I looked at the SRS rankings of all of the NCAA Division I champions from 1991 (the season Duke upset UNLV in the Final Four before beating Kansas in the finals) to 2011.  This is a span of 21 seasons.  I picked 1991 as a starting point for this study, as it roughly coincides with the time period that I can effectively remember.  I could have gone back to 1986 (when the NCAA instituted the three point shot) or 1985 (when the tournament expanded to 64 teams).  Doing this would have included a couple more surprise champions, such as the 1988 Jayhawks, or the 1985 Villanova Wildcats (one of the all-time surprise winners), but I doubt it would have changed my conclusions all that much.  And I wouldn't have much to say about that 1985 Villanova team; I was eight at the time.

From 1991-2011, the NCAA champion is almost always one of the top four teams in terms of SRS ranking.  Over these 21 seasons, only three champions have come from outside the top four teams, according to SRS.  These three lower ranked teams are the 1997 Arizona Wildcats, the 2003 Syracuse Orange, and the 2011 UCONN Huskies. The 1997 Arizona team was ranked 6th by SRS.  College basketball was loaded with talented teams in the 1996-97 season.  Arizona had to beat three different #1 seeds in the tournament, including one of the most talented teams that I can remember.

I don't think I have to say much about the 2003 Syracuse team, as I am sure we all remember them.

Here is a histogram that shows the breakdown of NCAA championships from 1991-2011 by SRS ranking. 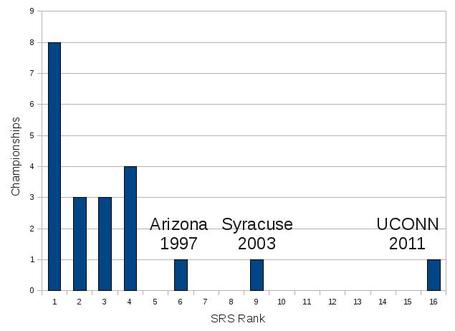 Here is a similar histogram that shows the breakdown of Final Four visits by SRS rank.  It nicely illustrates how Final Four teams typically come from the top teams by SRS rank.  14 of the last 21 teams with the #1 SRS rank made the Final Four. 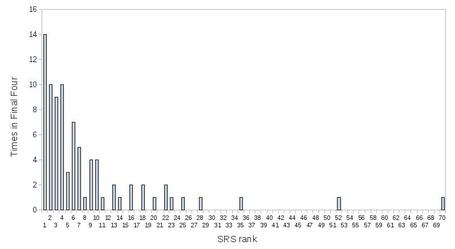 It is really interesting that the two biggest outliers on this graph (VCU at 70 and Butler at 52) came from this last season.  It illustrates just how crazy things were this year.  The team ranked #35 is the 2006 George Mason team.

Based on the information above, in order to give yourself the best shot at getting to the Final Four and winning an NCAA championship, your goal should be to be a top 5 team as often as possible.  Even better is to simply be the best team, as the top ranked team in terms of SRS wins the whole thing about 35-40% of the time.

Based on these ideas, what are the top NCAA basketball programs?

The top programs should be in the top 5 with a high frequency, which should in turn lead to the occasional championship.  Looking at the years from 2000-2011, here are all of the teams that ended up in the top 5 as determined by SRS, along with how many seasons they were in the top 5 as well as how many championships they won.  (I decided to only go back to 2000 instead of 1991 with this list to keep it from getting too long.)

This gives us a pretty good list of the top programs over the last decade.  Syracuse's championship did not come in their one season with a top 5 SRS ranking.  The same is true for UCONN's most recent championship.

There aren't really any surprises at the top of the list.  While we don't often put Florida into the same group with Duke, Kansas, North Carolina, and UCONN, they probably deserve some consideration.  Pittsburgh is also knocking on the door of this group, but a championship is still missing.  Much of the last decade has been a down period for Kentucky; they are the team hurt the most by not including the 1991-1999 seasons in this list (Arizona is also hurt by my decision to drop the 90s).

The next step up for Texas is to move from a top program to one of the consistently elite ones.

Texas' SRS rank by season during the Rick Barnes years

I don't have any comment here, but I thought it might be nice to show the data.

Finally, I want to thank kaydo.  Kaydo's comment gave me the idea to write this article.