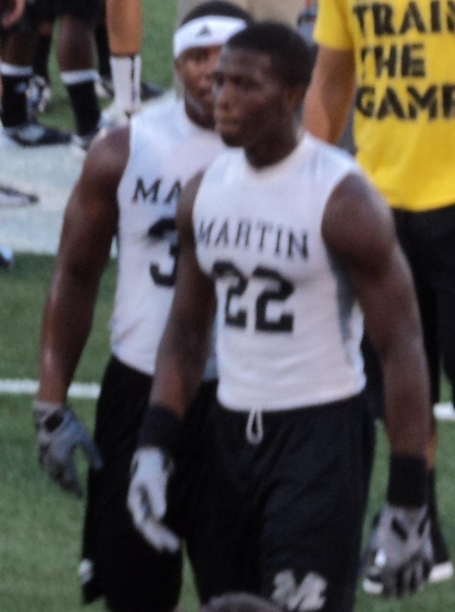 Unfortunately, Aledo and Pearland Dawson were eliminated in the opening rounds of the Game Breakers Tournament. Anybody that watched The Opening or read GOBR's excellent analysis of the event, knows what Johnathan Gray can do in a 7 on 7 setting. I'll have more on Pearland Dawson's James White in the coming weeks and months.

I did have the opportunity to see an excellent Arlington Martin team thoroughly dominate the final day of the Game Breakers Tournament. Devonte Fields and 2013 recruit Kyle Hicks were stand outs. More on Fields and Hicks after the jump. 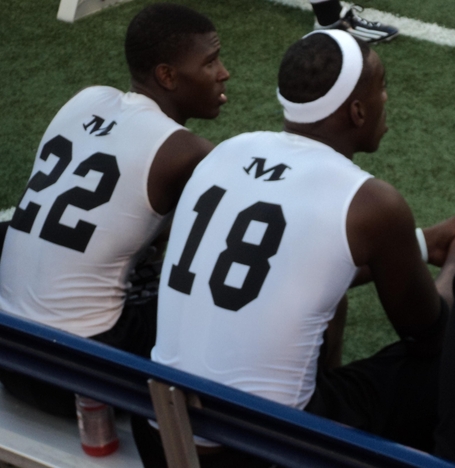 In a normal football setting, Devonte Fields would be the best player on the field. The TCU commit is very impressive off the hoof, and showed excellent leaping ability and athleticism in limited reps at WR. Fields is every bit of 6'4," and it looks like he put on muscle this off season. TCU is getting a very good one. I have to agree with GoHornGo90, Texas missed on Fields. I like what Hassan Ridgeway and Caleb Bluiett bring to Texas, but Fields is the best speed rusher in the state of Texas.

On to star of the Game Breakers Tournament, 2013 ATH / DB Kyle Hicks. Hicks is # 43 on the Rivals 2013 LSR 100 and is on Inside Texas's 2013 Watch List. Despite these accolades, Hicks has flown under the radar, overshadowed by other athletes such Livingston's Chevoski Collins or Cy Falls Jacorey Warrick. I'll go on record and say that I like Hick's size and frame better than Collins and Warrick. As Hicks attends more camps, I think he'll get more attention. Hicks has the frame and ability to be a top 200 player nationally.

What jumped out at me about Hicks physically is his frame and height. Hicks is every bit of 5'11," and could be pushing 6 feet. Hicks is ripped, but he has plenty of room to grow. Hicks looked to be around 175 pounds, but he could easily carry 200 pounds of solid muscle mass. Hicks has said in interviews that he runs between 4.4 and 4.5 40, and that time appeared legitimate in the Tournament.

Hicks played corner as a sophomore, but was moved to running back in the spring. Hicks played almost exclusively at slot wide receiver in the Game Breakers Tournament. Game Breakers doesn't allow running plays, so Hicks came out of the backfield sparingly. Hicks was also used as defensive speed rusher on third downs. Game Breakers Tournament rules require 2 seconds to pass before a defensive player can rush the passer, and there are no blockers. In Hick's limited defensive action he looked instinctive and disruptive. He knows how to stay in front of a ball carrier, take good angles in pursuit, possesses excellent closing speed and chops his feet before making a blow. I believe cornerback is Hicks' natural position. As sophomore cornerback, Hicks showed fluid hips, good recovery speed and striking ability.

As a slot wide receiver, the Arlington Martin quarterback looked for Hicks on nearly every play. Hicks ran mostly short routes, but he got loose on a few deep routes, easily getting separation from his defenders on 2 long touchdowns. Hicks made excellent adjustments on deep balls in the air which translates well to cornerback ball skills. Hicks was also impressive catching balls in traffic. Hicks boxed out well and attacked the ball with his hands to make difficult catches in crowded windows. Hicks looked elusive and showed good moves when catching the ball in space.

Hicks was the best player on the field at the Game Breakers tournament, and I came away impressed. I expect a big year for Hicks at running back for Arlington Martin, but I would also like to see him spend time at corner. Texas is an early favorite of Hicks, and hopefully he'll get more looks from the Texas coaching staff.

Hicks did not attend either Texas camp in June. It is unknown if Hicks received an invitation to the June 12th summer camp. Hicks will likely need a strong 2011 season to receive a Junior Day invitation from Texas. Hicks could be one to watch during the 2012 spring evaluation period.

Texas has done extremely well in recruiting the Metroplex, but Arlington is an area where I'd like to Texas improve. Miles Onyegbule is the only player on the Texas roster from Arlington. This must improve, especially with 2013 standouts A'Shawn Robinson, Kyle Hicks and Sammy Douglas all hailing from Jerryworld. Looking forward, I'm a strong believer that Arlington will emerge as one of the most talented areas in the Metroplex. Arlington is a not a city that Texas should concede to TCU and OU.