Has Texas basketball really underachieved relative to the quality of recruiting under Rick Barnes?

Share All sharing options for: Has Texas basketball really underachieved relative to the quality of recruiting under Rick Barnes?

Conventional wisdom seems to be that Texas has underperformed on the court, relative to the level of talent that Rick Barnes recruits.  Rick Barnes is a great recruiter.  He has recruited at a level never before seen at The University of Texas.

How do we go about testing to see if the team has actually underperformed, relative to the level at which Barnes recruits?  If there has been under performance, relative to the talent level, you would expect that it would show up by comparing both the on court and recruiting success of Texas with the other top NCAA basketball programs.  If a team fails to live up to their level of talent during the season, then you would expect that they would have significantly less regular and post season success than teams with similar track records of recruiting.  Additionally, you might expect that teams with comparable levels of on court success would be achieving this success with lower regarded recruits.

So, just how well has Texas recruited relative to other top basketball programs?

In order to see how well Texas recruits relative to the other top programs in college basketball, we first need to make a list of the top programs in college basketball.  This ends up being a subjective thing, because even if you choose objective criteria, the choice and weighting of criteria ends up being arbitrary and subjective.  Still, I took my best stab of doing this in a systematic manner.  I think the list that I came up with is pretty reasonable.

I started off using the list here, which is largely based on appearances in the top 5 of the SRS rankings.  I then whittled things down a bit, dropping most of the teams with only one appearance in the top 5.  I kept UCLA and Syracuse, because of their tournament success.  I also dropped one team with two seasons in the SRS top 5.  That team is Cincinnati.  They don't have the same level of tournament success that the other teams on the list have, and since Bob Huggins left they no longer should be considered a top program anyway.  The remaining teams are listed below.  I think this represents a pretty good list of the top college basketball programs right now.  Maybe there is a team or two missing, or one that shouldn't be on here, but it is a pretty good list.

This table also includes a few more interesting things.  I have included some information about tournament success over the years from 2000-2011.  For each team, the table shows the number of national championships, Final Fours, and regional final games.  I have sorted the teams, based on championships, Final Four appearances, and regional final appearances.  I have also added some information about recruiting, listing how many players from the RSCI top 50 and top 100 that each school recruited from the years 1998-2010.  The RSCI strives to be a consensus ranking.  These data are available by school at statsheet.com by following this link.

So this table more or less lists the most successful schools from the last 12 years, and puts them in a pretty reasonable order.  The exact order of the list is not really important, but generally the better programs are near the top.  Texas is in the 12th spot on this list, out of a total of 17 schools.

The only school appearing higher on this than Texas that has fewer top 50 or top 100 recruits is Maryland.  In terms of recruiting over the last 12 years, Texas' peer group seems to be Syracuse, Memphis, Arizona, Louisville, and Ohio State.  The on court success of these schools has also been pretty similar to the on court success of Texas over that time range.

I think Texas has performed more or less as well as you would expect, based on the strength of the recruiting.  It is pretty amazing just how well success and recruiting seem to track together.  Of course, this becomes a virtuous cycle, with on court performance boosting recruiting, and recruiting success leading to wins during the season.  I think it is always important to remember that talent usually wins.  If Texas wants to have success like North Carolina, then they will need to recruit like North Carolina.

We can also look at this another way.  Let's make a list of teams with similar recruiting rankings to Texas, and see how their actual results compare with Texas.  Again, working from the statsheet.com list, here are schools with a similar number of players in the RSCI top 100:

Schools that compare with Texas in terms of number of recruits from the RSCI top 100, 1998-2010 (The number of top 100 recruits is listed beside each school.)

So who on that list would you want to trade programs with right now?  Perhaps Ohio State or Syracuse?  They are the only ones to consider.  Let's make a similar comparison using the RSCI top 50:

Schools that compare with Texas in terms of number of recruits from the RSCI top 50, 1998-2010 (The number of top 50 recruits is listed beside each school.)

Connecticut and Michigan State are the class of this list.  And these two programs distance themselves from Texas when it comes to recruiting guys ranked 51-100.  (This shows up in the graphs that I have at the bottom of this article.)  How about guys from the RSCI top 10?  You can check out the list yourself, where you will see that Texas has the same number of top 10 recruits as Ohio State, Georgia Tech, and Minnesota.

Again, it is really hard to reach the conclusion that Texas has underperformed relative to their recruiting record over the last decade.

In order to emphasize just how great the gap still is in terms of recruiting between programs like Duke or North Carolina and Texas, I have made a few histograms.  I don't want to comment too much on them, because I think it is probably more interesting for you to look at them and draw your own conclusions.  I would love to hear what you think in the comments. 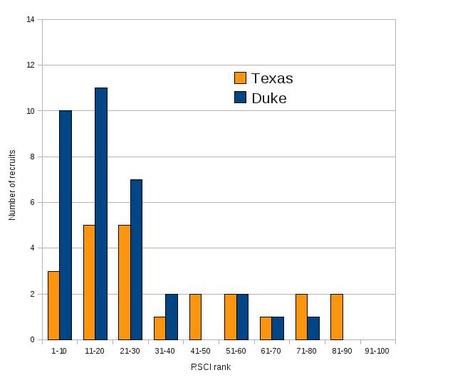 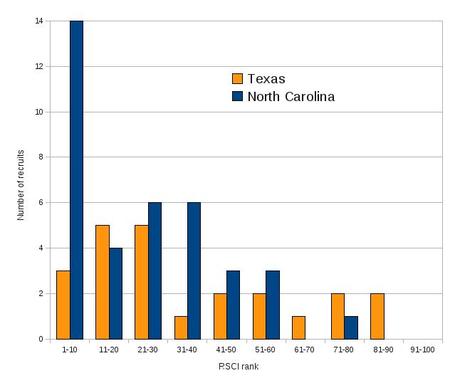 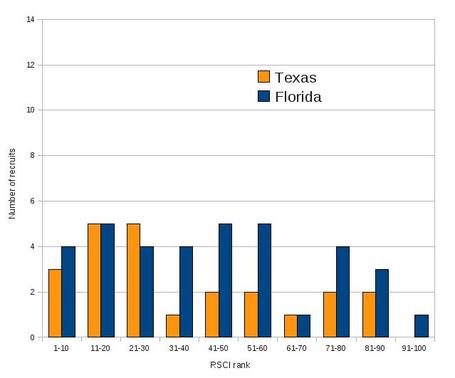 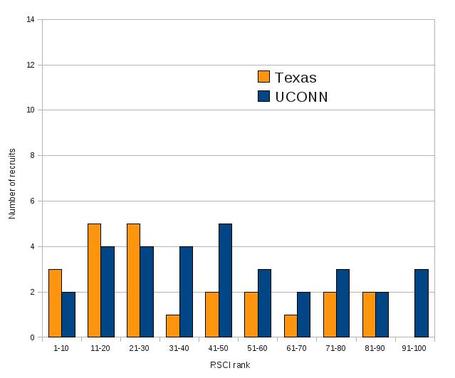 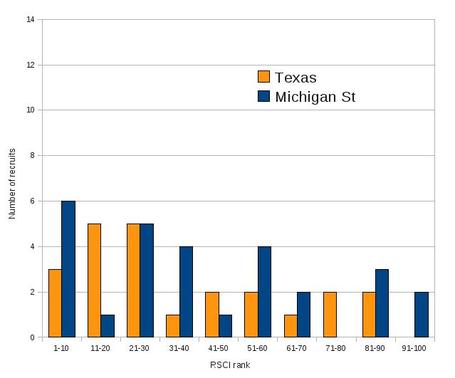 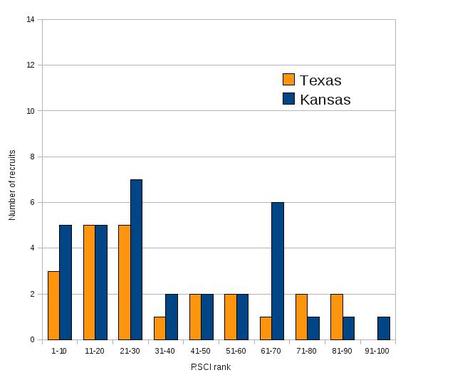 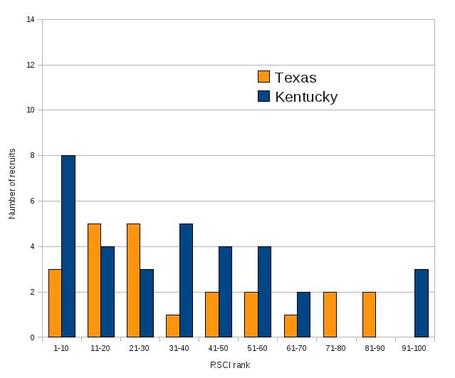