Share All sharing options for: Immediate help on the way? 2011 PF Jaylen Bond commits to UT

Much has been made of the lack of depth in Texas Basketball's 2011 - 2012 frontcourt. The Horns return seniors Alexis Wangmene and Clint Chapman as their only experienced post players. Obviously, Texas needed some help in the frontcourt, and they might have gotten it this evening with the commitment of 2011 Plymouth Meeting, PA PF Jaylen Bond. More after the jump. 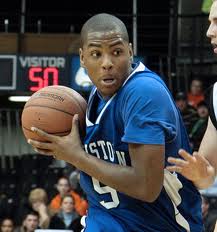 Bond is listed at 6'7'' 218 pounds. Bond averaged 18 points, 7 rebounds, 4 assists and 2 blocks as at Plymouth- Whitemarsh. Bond led Whitemarsh to a state title as a junior and was named first team all state in Pennsylvania. Bond is a versatile big man who can fill up a stat sheet. He could potentially play some small forward at Texas, but the need right now is at power forward. Bond is a developing player who will be asked to contribute immediately at Texas.

Contributing immediately is the tricky part. Bond was committed to Pittsburgh until recently, and Pitt would have to release him from his letter of intent  to gain eligibility at Texas. There was some confusion when this story broke that Bond would enroll in preparatory academy and take a post graduate year. This changed on Monday when Bond visited Texas and committed during his visit. Via Twitter, Bond himself tweeted that he intends to enroll at Texas for the fall semester. Texas will have until August 19th to iron out Bond's eligibility. The 19th is the last day Bond can register for the fall semester. It's unknown at this time how Pitt feels about releasing Bond from his LOI.

For the time being, Welcome to Texas Jaylen.