Bevo's Roundup: Things can only get better

Share All sharing options for: Bevo's Roundup: Things can only get better

Bryan Harsin is everything Mack Brown thought he was and more. [Sacramento Bee}

"He slings from the hip," the Texas coach said. "He may (try) two tight ends with a full-house backfield one play, then go no backs and throw deep on the next play. It's amazing how well he teaches it and how much there is."

Brown's new co-offensive coordinator and play-caller has already changed the Longhorns' scheme and energy level from predecessor Greg Davis after a season that was worse than the 5-7 record indicates.

Last season was frustrating for Tray Allen. [Ft. Worth Star-Telegram]

We can only get better, right? [Dr. Saturday]

But even here, the difference between a merely decent D and a dominant one hinges on an assortment of blue-chip talents coming into their own. Returning defensive ends Alex Okafor and Jackson Jeffcoat and linebacker Jordan Hicks all arrived as five-star prospects; linebacker Steve Edmonds and cornerback Quandre Diggs joined as borderline five-star types in the incoming recruiting class. If there's a breakout star or two in that group, all the offense will have to do to get the 'Horns back into the polls is stop turning the thing over.

The Horns have to earn their spot in the Top 25. [AAS]

So, what is the hold up on the network? [Ft. Worth Star-Telegram]

Another point of negotiation between ESPN and potential distributors is the service level at which LHN is carried. ESPN is pushing for LHN on basic service plans, according to industry officials, guaranteeing the highest level of penetration and subscriber fees.

The general reception among distributors is to place LHN within premier sports packages that require an extra monthly charge. A similar stalemate has existed with the NFL Network for years with certain distributors, such as Time Warner. Some carriers were only interested in the NFL Network if it could be put on a higher-priced tier.

Whoop. The Aggies received their highest ranking since 1999. [KBTX.com]

Congrats to 12th Man. Beergut gets to write about the t-sips. And he actually has some readers! [I Am The 12th Man]

This is definitely a Big 12-2/Beebe conspiracy against the Aggies! The conference will defer to the NCAA about the LHN showing high school football highlights. [I Am The 12th Man]

Basically, Dan Beebe, Bob Burda, and others in the conference office are chickening out, and not even backing up their own moratorium. What does this really mean, besides offering yet more proof that Dan Beebe is an incompetent leader who lacks the courage of his convictions or a backbone? The Big 12 is tacitly acknowledging that A&M is headed to the SEC, and texas, the lhn, and ESPN are free to do what they wish. Billy Liucci tweeted as much Thursday afternoon.

"We look at anything we might do — remaining in the Big 12, changing conferences — as a very long-term prospect, a 100-year kind of decision," he said. "You don’t make those decisions lightly or quickly. We really want to take our time and think about this very carefully, listening to internal voices and external voices."

You better understand the rules of the SEC before you bolt. [Ft. Worth Star-Telegram]

It’s understandable why A&M would want to escape Texas’ shadow in the Big 12 and come to the SEC, where member schools split a record $220 million in a revenue-sharing plan this fiscal year. I’m not quite as sure why the SEC wants A&M, because other than getting its toes into the state of Texas — assuming College Station counts — this is like a high-end mall expanding to add a Walgreens.

The Sooner defense is dealing with injuries. [Tulsa World]

A three-year starter who has already amassed a whopping 362 tackles, the 6-foot-2, 227-pound Travis Lewis was primed for his final Sooner season. He would use his extroverted personality and status as a team captain to provide the leadership in proving doubters of his defensive unit wrong.

Stoops must now hope that fractured toe on the foot of the player who is the heart and soul of his defense is healed in time for OU's Red River Shootout with bitter rival Texas in Dallas on Oct. 8.

What's there to know about the Sooners after two-a-days? [NewsOK]

There are three terrific trios in Oklahoma. [Tulsa World]

What do you do with former Miami coaches in the conference? [Columbia Tribune]

Be very grateful for what you have. [St. Louis Post-Dispatch]

Just say no to the University of Houston. [NewsOK]

So Houston is just kooky talk. If the Big 12 wants to try to survive by getting back to 10 teams, or even better 12, then it can’t look at Houston. Brigham Young is the best place to start.

Holmoe said quotes about expansion and BYU are not coming from athletic directors, presidents or Big 12 commissioner Dan Beebee.

That is basically true.

But they are coming from reporters who talk to those folks off the record.

The Tigers are still looking for a backup quarterback. [Columbia Tribune]

The Bears are clicking right along on offense. [Baylor Football]

"Doubting is something the media does after a team has a 3-9 season,'' Tharp said. "But the media doesn't always have the scoop on exactly what's going on inside everything. It's tough for them to judge. I've seen a lot of good characteristics in this team and I think we'll take quite a few steps from where we were last year.''

How will those SEC recruiting tactics fly in the Big 12-2? [NewsOK]

But you have to wonder — if SEC teams bring any dirty tactics to the recruiting scene in Texas, would Big 12 teams be more likely to turn them in? It's one thing to recruit almost exclusively in SEC country. It's quite another to try and stick your hands into another conference's recruiting honey pot.

You know things are bad when the players pay the boosters. [Seattle Times]

"When I played at Iowa State," tweeted Marc Lillibridge, a Cyclones linebacker from 1992 to 1994, "we were so bad the football players had to pay the boosters to show up for games."

How about some bowl predictions? [ESPN Big 12 Blog]

College athletics is killing itself whole, one hypocritical scandal at a time, yet any honest reform is almost impossible to envision. We’re not talking about the too-little, too-late band-aids sprouting from last week’s vaunted NCAA retreat, one that featured no less than Shalala.

The whole system needs to go. The whole concept needs to be redone.

The Iowa-Iowa State winner gets a new trophy this year. [Dr. Saturday]

Who will be college football's Texas this year? [Jones Top Ten]

Sources have told CaneSport that shortly after he was named to replace Larry Coker in 2007 that Shannon threatened his coaching staff with firings if they ever dealt with Shapiro and warned his players about Shapiro multiple times in team meetings during his four-year coaching tenure.

I doubt the allegations against UM's football team are that unusual as NCAA violations go, although the salacious details (prostitutes, strippers, and abortions) are irresistible to the media.

Google the word football. See what comes up. 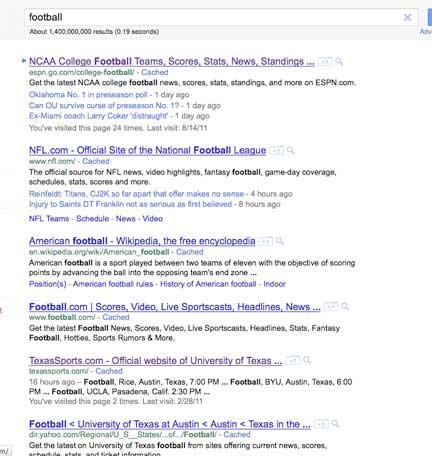