I heard there was some huge news today. Aggie is going to do what they do, and I'm going to do what I do and talk recruiting. In this edition of Thirsty Thursdays we center our attention on the 2013 cornerbacks. Texas has a very young secondary, but a ton of talent. Any 2013 CB will have to be the bluest of chips to break the rotation early. 2013 Bastrop CB Antwuan Davis could be a candidate to force his way up the depth chart. Speed, ability, polish and size. 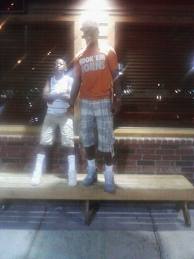 Kayne West thinks this picture is awesome. Enough swagger for you Mack? More after the jump.

Antwuan Davis is listed at 6'1'' 185 pounds. Davis ran a 4.35 40 at June 5th Texas Camp and a 4.34 40 at a TCU camp. Once is an anomaly, twice is a pattern. For the track purists, Davis has run a 10.36 100 and competed in the Junior Olympics over the summer. The speed is legit. Think a more polished Sheriod Evans. Davis has elite recovery speed and is a potential shut down corner. When receivers run good routes against Davis he possess the ability to take away their cushion and close quickly. Davis needs more polish playing cornerback, but that's a given for his age.

Davis is not a track guy playing football, but he is serious about his track and is probably unwilling to give it up before enrolling in college. I don't think Davis will run track in college, but I wouldn't expect him to enroll early. I think Davis will run track as a senior. Expect to see Davis used primarily on defense, but he will see some time on offense this year for Bastrop.

Davis injured his hip this summer, and is still recovering. He is not expected to miss time and played well against Lake Travis in a scrimmage last week.

Davis told Hook Em 247 that heis leaning towards Texas over TAMU and TCU. Davis likes and respects Akina's record of putting DBs in the NFL. Davis did attend the Texas June 5th Summer Camp and had an excellent showing against older competition.

I expect Davis to be offered at one of the Junior Days coming up in February. TAMU was Davis' leader until recently because of their track success. Davis also seems genuinely interested in TCU. Davis is expected to be a top 50 - top 100 player nationally, so the national powers will get involved. I think Texas can get Davis early if they make him a priority. I expect that they will. An early commitment from Davis could be a huge help in Texas becoming a player his teammate 2013 Bastrop LB Paul Whitmill.

Other names to consider:

For the purposes of this column I've focused only on pure cornerback prospects. I will address the athletes at a later date.

It gets interesting after Antwuan Davis. Davis is the clear cut # 1 2013 cornerback in the state of Texas. It's arguable that Davis is the top corner in the state of Texas right now, he's that elite. I believe 2013 Dallas Skyline DB Will Barrows will be seriously evaluated by Coach Akina. Barrows is listed at 5'9" 160 and runs a 4.55 40. Barrows makes good breaks on balls, tracks the ball in the air well and does some nice things on interception returns. I am concerned with Barrows' size. I believe the 5'9'' height is accurate, but Barrows looks slight. Does Texas want to take another undersized corner after taking Bryson Echols and Orlando Thomas this year? I think Akina will be looking for size at DB as he rounds out the 2012 class, and starts work on the 2013 class. Barrows could need a strong junior season to get serious consideration for a Junior Day invitation. One interesting note is that Barrow's Skyline teammate Ra'Shaad Samples told Recruitocosm Mack wants him at the first junior day. Could Texas be looking to add to the Skyline pipeline with Samples and Barrows?

Will Barrows Highlights (via 247SportsStudio)

Do not sleep on 2014 Dallas Skyline DB Cedric Collins. Collins could be the best sophomore cornerback in the country. Wrapping up Samples and Barrows could help Texas in their recruitment of Collins. Right now I expect Texas to take 2 corners in the 2013 class. Texas could be looking to take a versatile DB and an ATH to round out the 2012 DB class.

I'll have a story up tomorrow previewing the High School Football weekend. Scheduling notes for tonight:

Katy Cinco Ranch vs. Klein Forest is on Fox Sports Southwest at 7 pm.

Pearland vs. Houston Madison is on Houston Channel 57 at 7 pm.

Anderson vs. McCallum is on Austin Channel 51 at 7pm.

West Mequite vs. Rockwall Heath is on DFW Channel 21 at 7 pm.

As always, get your questions ready for Sundays with Bill at 5 pm.