Under the Lights, Zero Week Edition

Share All sharing options for: Under the Lights, Zero Week Edition 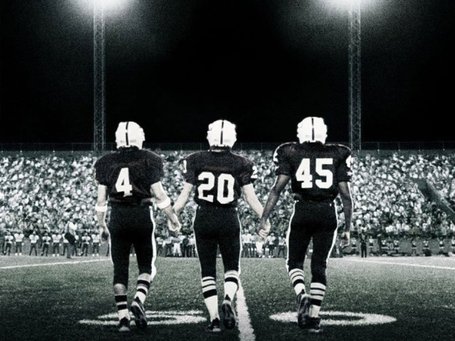 High School Football in Texas is so much more than a game, it can define a town. More after the jump.

It's something that people from small towns can hang their hats on. It's a pride thing, people don't have to look down at their feet when they tell others where they're from. They'll look you right in the eye and say I'm from Sealy, Go Tigers! I'm from Odessa, MOJO! I would have never heard of so many places and towns in Texas without high school football. If it weren't for the Tiger Football, I wouldn't have any idea where Daingerfield is, but because of football I can point to it on a map.

When Peter asked me to write this piece, I knew it would be the easiest feature I've ever written. I love Texas High School Football, it's part our culture. My brother once compared Texas High School Football to joining the Army, it makes you a man. Where else in the world can you get in your car and drive a few hours to a 6 man game in front of a 100 people on a Friday night at a dirt field, and drive back to watch a 5A game in front of 20,000 people at a state of the art stadium? They play high school football in every state in the Union, but nobody plays like it we do here. "High School Football in Texas is a religion" is cliched and used far too often, but it's a true statement. My mother couldn't pick Tony Romo out of a lineup, but she can rattle off the names of every key contributor on the 2009 4A Championship Lake Travis Football team. Texas High School Football transcends race, religion, gender and in my mother's case interest in football. It permeates our existence, you can't help but get caught up in it.

Every week I will choose a game of the week and players to preview. I will also pick the top match ups for the largest metropolitan area in the state, Houston, Austin, San Antonio and Dallas. I understand many of you are unable to attend these games, so I will focus on televised games featuring players of interest to Texas fans. Longhorn Network telecasts of high school football games would be a big help right now.I encourage all of you to watch the Friday Football Blitz on Fox Sports Southwest for 6 hours of highlights. Coverage begins at 7 pm Fridays. My apologies to out of staters who don't get Fox Sports Southwest. I present to Burnt Orange Nation citizens The Master Key, every televised Texas High School Football game this year:

All Games at 7 PM Unless Noted Otherwise

Zach Whitley, Class of 2014, grown ass man. Whitley could be the top sophomore linebacker in the country. Texas will come a calling, good thing North Shore is on the Texas pipeline.  Adam Taylor is a bruising running back with great size. Texas is currently evaluating Taylor.

This game needs no introduction, it's a regular season high school football game that is played at DKR. One of the best rivalries in Texas High School Football, these two teams and fanbases hate each other. Should be a very competitive grudge match.

Allen is the top ranked team in the state, and features Alabama commit QB Alec Morris and stud running back and Missouri commit Jonathan Williams. If you have the chance, watch Williams play this season. Cedar Hill is always tough and has 2013 ATH LaQuvionte Gonzalez.  Gonzalez is a burner who could receive some interest for Texas.

ESPN still wants high school football on the Longhorn Network, but for now we'll have to settle for high school games on other ESPN platforms.

Denton Ryan might possess the most talented defense in the state of Texas. The Ryan defense features FSU commit Mario Edwards, TAMU commit Jordan Richmond and Texas commit Alex De La Torre. Sulphur Springs is a high scoring machine who will be a great early test of the Ryan defense.

I'll be watching this game closely and have a rundown on Monday. Is DLT Texas worthy? How does DLT compare to Jordan Richmond?  How good is Mario Edwards? Texas is still recruiting Edwards, I expect a dominant performance. It'll be interesting to see how Edwards is carrying the additional weight.

The man, the myth, the legend Dorial Green - Beckham in a good opening test. DGB was regularly triple teamed last year, how will Seneca match up? This will be the first time many Longhorn fans, including myself, have ever gotten to see DGB live. Texas' recruitment of DGB is picking up steam. Per Inside Texas, in a recent press conference DGB mentioned only Texas by name, and Coach Beckham pointed out that there are direct flights from Austin to Branson. It seems like Texas, Mack and Coach Wyatt really made an impression on DGB because he's still talking about his visit. Cheer DGB on Saturday night on The U. I'll also have a rundown of this game on Monday.

Enjoy the weekend, and join me for Sundays with Bill at 5pm.