DGB shows out on national television

Share All sharing options for: DGB shows out on national television 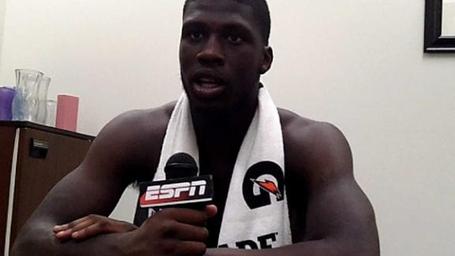 Play your cards right Dorial, and you'll be endorsing both soon. More after the jump

Dorial Green - Beckham (DGB) had 18 catches for 284 yards and three touchdowns against Seneca, MO on ESPNU. DGB was thrown at 28 times. Your fantasy team would kill for that many targets. Basically DGB is Hilcrest's offense.

As we saw last week with Chaparral High vs. Bishop Gorman, Texas High School Football plays at a certain level and then there's everybody else. I'll put it this way, Austin Anderson could win state every year in Missouri. I would have loved to see DGB in The Opening or Gridiron Kings to see him against top flight competition.

DGB is 6'6''  and a lean 220 as a high school senior, but if you think he's a tight end at the next level, start hitting yourself in the head with a hammer. Ball - peen is preferable. Kids are getting faster, stronger and heavier each year. Calvin Johnson is "listed" at 236.

Seneca regularly bracketed DGB with a cornerback(s) and a safety(safeties) over the top, but it wasn't nearly enough. The 4.43 speed is legit, DGB can really turn it up field. DGB flips his hips, and he's gone. He's not a long strider, or a glider, he's just fast as hell. DGB also has some shake in his moves. Quick twitch athlete. Calvin Johnson is the most accurate comparison. You really see the basketball agility with DGB on the gridiron. He's a fluid athlete at 6'6." This is very rare.

A good shut down corner can take away a side of the field, DGB gives an offense the ability to do anything they want on a side of the field.  Throw it to him, use him as a decoy and run it to his side, it doesn't matter, a defense is doomed when they have to dedicate 3 or more players to one wide receiver. Hilcrest running backs will have huge holes to run through all season.

DGB is a load to bring down. He seeks out contact and yards after the catch. He's not a tall receiver looking to run out of bounds. DGB will square his shoulders and deliver a blow.

DGB knows how to use his body, he understands he's bigger than every defensive back and shields the defender to make the catch. DGB has extraordinary body control while he's in the air. DGB made a Limas against Ohio State like catch against Senaca. Falling backward while extending for the football.

DGB can jump out the gym. Throw it up and he'll go get it. I felt sorry for the Seneca DBs on jump balls. They truly had no shot .

DGB recognized single man coverage, signaled his quarterback and adjusted his bubble screen to a go route. A simple adjustment, but it shows football intelligence.

DGB could be more aggressive coming off the ball. I'm not sure if it was because DGB was dominating Seneca, but he wasn't firing off the ball like he should. A bigger college corner could give him trouble in the future if DGB doesn't adjust. College defenses will jam an underclassman DGB at the line of scrimmage, a lot.

DGB has a lot of natural gifts, but he needs to to fill out his frame in the weight room. He's more wiry strong than brute force at this point. Once he visits the Calvin Johnson gun show, watch out.

DGB could also improve his route running. Almost every WR recruit isn't going to be a great route runner in high school, unless he's a Shipley. DGB seemed to run to spots to get open more than he ran crisp routes against Seneca. DGB has the physical gifts to get away with that now, but he'll need the extra separation created by running a good route at the next level. DGB has the moves to run great routes eventually. He had an excellent spin move on an out route for his second touchdown.

Some have called DGB raw. I disagree. When I think raw, I think Limas Sweed STRUGGLING to learn how to be a football player as a underclassman at Texas. DGB knows how to play football. Sure he needs polish, but so many gifted high school athletes do.

Pure and simple DGB is playmaker. Home run threat, a threat to score every time he touches the ball, doesn't do DGB justice. He could be the Jamaal Charles of WRs at Texas. A success story that the coaches can point to when recruiting future prospects. In a few words, a program changer. When was the last time Texas had a wide receiver capable of winning a Heisman Trophy? Ever?

DGB is looking to cut his list down to 5 - 6 teams within the next week.

The good news for Texas is that Coach Wyatt is a family friend of DGB's father John Beckham, and Mack always does well with coaches sons. Texas should get an official visit from DGB in the fall.

DGB and Coach Beckham held a press conference recently and Texas was the only team mentioned by name. Coach Beckham also pointed out direct flights from Austin to Branson, Missouri. Branson is about 40 miles from DGB's home in Springfield.

The official visit will be huge. I believe DGB is looking for an extended family when deciding on a school. Thank goodness a family atmosphere is one of Texas' strong points.

Best of luck to DGB. He's the type of young man you pray will succeed.

As always join me for Sundays with Bill. I've reformatted and the chat will begin at 5 pm so more people can get involved. Have your questions ready.