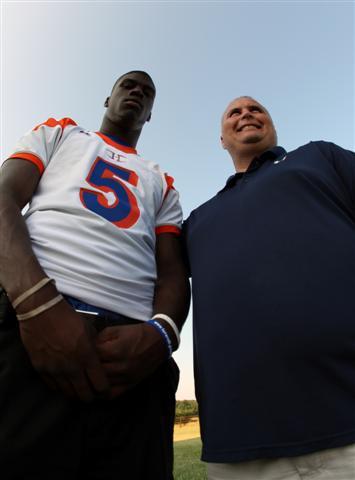 John Beckham has done some name dropping recently. More after the jump.

A good many Texas professors told me to not bury the headline. Many excellent high school football games were played in played in Texas during Zero Week, but a Quarterback Club luncheon in Springfield, Missouri has my undivided attention. After a John Bekcham press conference last week where Texas was the only school mentioned and direct flights from Branson to Austin were pointed out, I figured the Beckhams were done talking for awhile. They are after all playing right out of the Jeffcoat close to vest playbook. However, a funny thing happened today at a Missouri high school football get together, Texas came up again in the recruitment of Coach Beckham's son Dorial Green - Beckham.

In response to a question about whether proximity to Springfield is important to Dorial, the receiver said no. Then, John interjected with how getting to the campus to see Dorial is important to the family. For instance, he said, since there is a direct flight from Branson to Austin (home of UT), that would make it more helpful.

Not a big deal, just a casual reference.

Beckham was talking about the lead up to Saturday’s ESPNU game against Seneca and how many coaches were texting him good luck messages.

The only person he mentioned by name was Mack Brown, saying the Texas coach said he’d be watching. Beckham joked something to the effect of, "You better not."

Again, the only specific name mentioned. Again, not a big deal, just a casual reference.

But Dorial disclosed to reporters in Arkansas a couple weeks back that he has his top five decided and doesn’t want to make it public. John told ESPN that same thing over the weekend. Certainly John knows who those teams are.

To me, I have a hard time believing he would drop the name and the school twice in a week unless Texas was in the mix.

Just some food for thought (and wild, perhaps irresponsible, speculation).

Do you think Mack and John Beckham are tight yet? I believe Texas will make DGB's top 5, and receive an official visit this fall. Texas is serious player for DGB. Period.

If you'd like a scouting report on DGB's game on Saturday, look here.

In one of the featured games of the week,  Hilcrest (Springfield, MO) demolished Seneca (Seneca, MO) 48 -26 on ESPNU. The DGB scouting report tells you all you need to know. DGB is good, Calvin Johnson good.

Billy Ryan took it Sulphur Springs 25-9 in a nationally televised game on ESPN. Mario Edwards is a stud, but we already knew that. Super Mario had 2 sacks and forced a fumble that was recovered for a touchdown.

Aggie commit Jordan Richmond had a slick pick in coverage and gave Ryan some snaps at running back.

Texas commit Alex De La Torre, blink and you might miss him. DLT just missed a big sack that Mario Edwards cleaned up. DLT was getting penetration, but unable to make a few big plays. I don't have concerns about DLT getting off blocks, but he needs to finish. Alex played his assignments well and lead his team. Get ready for Mack to drop "coach on the field" at least a half dozen times when discussing DLT at the 2012 Signing Day presser. I think DLT has a frame that Wylie can work on, and his height appears legit.

Denton Ryan held Sulphur Springs to 155 yards of total offense and one touchdown. Ryan and Lake Travis seem destined to face off once again in the 4A State Championship.

Lake Travis destroyed Westlake 35-7 at DKR. That makes 4 straight victories for the Cavs over Westlake, not that anybody is counting.  Lake Travis lost starting quarterback Colin Lagasse to a shoulder injury, but back up Baker Mayfield stepped right in and threw for 278 yards and a touchdown and ran for 106 yards and 2 touchdowns. Another running, Lake Travis quarterback, sounds familiar.

Lake Travis starting running Shaun Nixon was having a nice game before he left with a turf toe. In the very limited film I've seen on Nixon, he appears to be the real deal. I expect Texas to evaluate Nixon when the time comes. It's difficult to speculate on running back targets for 2014, but Nixon should be in the mix for an offer.

# 1 ranked Allen took care of Cedar Hill 28 -13 at SMU. Recent Alabama commit Alec Morris threw for 248 yards and 3 touchdowns to lead the Eagles over Cedar Hill. The concern with Allen is their defense, the Eagles will put some points on the board this year.