Evaluating the impact of the blocked shot

Share All sharing options for: Evaluating the impact of the blocked shot

Thank goodness the summer is almost over, and we can start to talk about actual sporting events again.  While most of the content at BON will be football focused for the next few months, we will be continuing to post regularly on basketball as well.  This is because the site overlords living in the BON-cave are big basketball fans.  They have agreed to double my salary [ed. note:  2 x $0 = $0] in exchange for contributions to this site about basketball during the fall.

Today I want to talk a little bit about the blocked shot.  I am interested in trying to understand the effects of shot blocking on defensive effectiveness, and have been doing some work lately to better get a handle on it.  Not surprisingly, there is a very simple and intuitive relationship between shot blocking rate and opponent field goal percentages.  In this post I describe this relationship and also present a simple thought experiment that allows us to come up with a rough value for a single blocked shot.  There is also a little bit about Tristan Thompson.  In a future posts, I will apply some of these ideas to reexamining the end of the 2010-2011 Texas Longhorns basketball season, and I will look at a few NCAA programs that are good at blocking shots, and at a few programs that are good at field goal percentage defense on unblocked shots.

We can develop a really simple relationship to predict the opponent's two point FG% as a function of Blk%.  This relationship ignores many other defensive factors, but it does give is a way of understanding the value of a blocked shot if we remove all of the other factors.  We do this by assuming that teams shoot an average FG% on two point shots that are not blocked, and then we multiply this field goal percentage by the percentage of shots that are not blocked.  Of course, all blocked shots are missed, so we end up with the equation

We can treat the average 2 point FG% on unblocked shots as a fitting parameter, and vary it so as to fit the actual data from the kenpom.com site.  The fit of the equation and all of the shot block data from 2011 are shown in the graph below.  I have also labeled the 2011 Texas team on the plot (more about this will be in a future post). 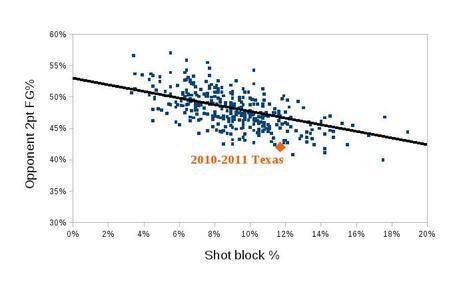 There is a fair amount of scatter in the data, but we get a pretty good fit.  The best fit line is

As an internal consistency check, 53% is also the average FG% on all 2 point attempts that aren't blocked, so the fitting equation is consistent with this average.

So what does this relationship mean?  It is interesting that 2 point FG% is basically a linear function of blk%.  One the one hand, this is what you would expect, if you are looking for the simplest explanation of things.  On the other hand, it really makes you question the idea that there might be some sort of extra intimidation factor associated with having a good shot blocker.   Why is this?  It is because one implication of the plot above is that on average teams that block a lot of shots and teams that do not give up roughly the same FG% on unblocked 2 point attempts.  If there was some sort of extra intimidation factor on FG%, we would expect that teams with a higher blk% might also have a lower opponent FG% on unblocked two point shots.  But this is not the case.  So if there is an effect of intimidation on FG%, it is small enough that it doesn't really show up in the FG% data.


How valuable is a single blocked shot?

Let's take a stab at estimating how many points a blocked shot is worth for NCAA basketball. I am not exactly blazing new ground here with my analysis.  Many of the rating methods for individual players you will find on the Internet attempt to estimate the value of a blocked shot (along with many other factors).  Still, I think going through the exercise in a very simple way is interesting.

The NCAA average FG% on two point attempts is about 47.9%.  This means that on a typical two point attempt the  offense expects to score 0.958 points.  So one might naively infer that a shot block is worth 0.958 points to the defense.  Unfortunately, this analysis is incorrect.  To come up with a value for a single blocked shot, we have to work a little harder.  We have to go through all of the possible outcomes that could occur if a shot is unblocked, as well as all of the ones that could occur if it is blocked.  Then we need to take the expected points scored in the blocked shot case, and in the unblocked case, and calculate the difference.  This analysis is actually a little bit tricky, but if we make some reasonable approximations we get an estimate of the value of a blocked shot.

So, let's first consider outcomes that can occur of the shot is not blocked.  Let's use the NCAA average of 53% on unblocked two point attempts.  That means 53% of the time the shot goes in, while the other 47% of the time the shot is missed.  Now, of those misses, the offense will get some offensive rebounds.  A typical offensive rebounding rate for NCAA Division I is 35%.  After that, let's assume that the offense continues to only take two point shots, and does not turn the ball over for the rest of the possession.  (This assumption is in the spirit of making an approximate estimate.)  In this case, I can borrow from some work that I have done in the past for part of the calculation.  Recall that for a team that never turns the ball over, and only shoots two point attempts, the expected points per possession will be:

We assume that after grabbing the initial offensive rebound on an initial missed (but unblocked) shot, we revert to this standard formula for the rest of the possession.  Our calculation of the expected points for an offense on a series such as this one that starts without the shot being blocked is

As a check of some of our assumptions, let's do the analysis of points on the unblocked shot series in an entirely different manner.  Let's assume that on a missed but unblocked shot that is rebounded by the offense, that they simply restart the possession.  The NCAA average for points per possession is approximately 1.03.  So in this case, we find the expected points from the string of events that start from an unblocked shot is

Hey, look at that.  By both methods, with entirely different assumptions, the results are pretty similar.  This always gives me a warm fuzzy feeling, and makes me a bit more comfortable with the assumptions and analysis.

Now we need to look at the events that unfold if the shot is blocked.  We get to use some of our previous assumptions, but have to now introduce a new one.  One thing that I have no idea about is how often a blocked shot is recovered by the offense, and how often it is recovered by the defense.  We will use a few different numbers for this, to test the significance of our assumptions.  Let's assume for now that 50% of the time the offense recovers a blocked shot.  Now we can rerun our calculations with our two very different set of assumptions about what happens after the offense recovers the blocked shot.  First, let's take the case where we assume that after recovering ball the offense only attempts two point shots.  In this case, the expected points for the offense are

Now we do the calculation in the case where we assume that after recovering the blocked shot the offense resets, and starts with a new possession.

Again, the results starting from the different sets of assumptions are pretty close.  There are some problems with what I have done.  For example, the shot clock doesn't reset on a blocked shot, so these numbers probably overestimate a bit the amount of points the offense can score after having its shot blocked.  But I suspect this effect is really small, and given that I have wildly guessed at the probability that the offense recovers a blocked shot, there likely much more uncertainty as a result of this ball recovery factor then there is with anything else.  What if we instead assume that the offense recovers the blocked shot 30% of the time?  In this case the expected point total will be around 0.31 or 0.35, depending which set of assumptions that you prefer.  If they recover blocked shots 70% of the time the values are 0.72 or 0.82, depending on your choice of assumptions.

Now let's try to apply what we have learned

Let's explore these ideas a little further with a concrete example.  Last season Tristan Thompson blocked 86 shots in 36 games, which works out to roughly 2.4 shots per game.  This is a pretty good rate for an individual player.  The contribution of these blocks to the final score works out to roughly 1.7 points per game. Since the Longhorns averaged about 67 possessions per game last year, Tristan's shot blocking accounted for a reduction of about 2.5 points per 100 possessions in the total defensive rating for the Texas Longhorns.  A difference of 2.5 points per 100 possessions is roughly the difference between Texas (#2 ranked defense) and Utah State (#10 ranked defense) on kenpom.com last season.  So these blocked shots have a real impact, although as I will describe below we cannot give Tristan credit for all of this effect.  Even if he had never played a single minute, his replacement would have at least blocked a few shots.

We can also look at Tristan's results in another way.  While on the court, he blocked 7.2% of opponents two point attempts.  This shot blocking rate reduces the opponent's FG% on two point shots by approximately 4%, if we assume that these shots would have been unblocked if Tristan was not on the court.  Such an assumption likely overestimates the effect of Tristan's shot blocking, as his replacement clearly would block some shots.  His replacements were Matt Hill (block% = 4.3%), Alexis Wangmene (2.3%), and occasionally Gary Johnson (1.0%).  Now, the percentages for these players are perhaps artificially lowered somewhat by the fact that when they are on the court with Tristan, he was likely taking away some of their opportunities to block shots.  So let's assume that his average replacement was on the upper end of the shot blocking range of the group Hill, Wangmene, and Johnson.  Let's assume that when on the bench, Tristan's replacement blocked 4% of all two point attempts.  In this case, when Tristan was on the bench we would expect that opponent two point FG% might rise by roughly 2%.

No matter how you slice it, either by looking at the impact on the final score of Tristan's blocks, or their effect on opponent shooting percentage, having a big guy in the middle who blocks shots is a big asset.

We have looked at a couple of things.  On average across NCAA Division I basketball, there is a pretty simple relationship between shot block % and two point FG%.  There is more to two point FG% than blocking shots (as we will see in a future post), but the effect of shot blocking on a defense is pretty easy to see and describe.  Additionally, a single blocked shot is worth about 0.7 points (give or take a quarter of a point) in the final point margin for a game.