2013 Safeties : Marcell Harris and everybody else

Share All sharing options for: 2013 Safeties : Marcell Harris and everybody else

A lot of superlatives have been thrown around about 2013 Groveland, FL South Lake Safety Marcell Harris, but I only need one. Duane Akina told Harris' coaches that he was the best sophomore DB he had seen three months ago. I doubt that has changed. Harris camped at Texas on June 12th with the family, and left Austin very impressed. Marcell gave his visit a 9 out 10, taking off one point for the heat. Harris' parents were very impressed with Texas' facilities and Coach Akina. Harris' father went so far to tell GatorBait (UF 247 affiliate) that he might not have chosen Florida if he had visited Texas. Mike "Mud" Harris was a defensive back for the Gators in the 90s during the Steve Spurrier Era. 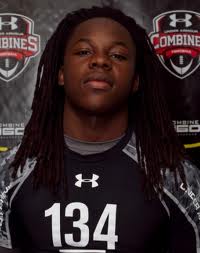 The dreadlocks and wearing # 27 don't hurt. More after the jump.

Marcell Harris is listed at 6'2'' 193 pounds. The height and weight appear legitimate. Per Harris' high school coach Terrance Larmond: Harris runs a 4.53 40, a 4.4 shuttle, and the 440 in 58 seconds. Harris has a 31 inch vertical, and power cleans 285 pounds as a soon to be junior. Harris is expected to be a top 50 player nationally, and one of the top three safeties in the country.

Marcell Harris plays an excellent centerfield, and can make up a ton of ground quickly to make plays on balls in the air. Granted, Harris won't see as many poorly thrown balls at the next level, but Harris will earn his scholarship picking off deep balls and making plays on tipped balls. Harris has good anticipation when jumping routes, but there's room to grow there. Harris excels at being the last line of defense. He makes touchdown saving tackles, and clearly understands he is the last line of defense. You won't see Harris dive at ball carriers' feet, he makes a solid, momentum stopping tackle.

Harris is impressive in run support. He can come up to line of scrimmage, fill his lane, maintain containment and lay the wood. Harris finishes plenty of tackles, and has the size and aptitude to help in run support. Harris sheds blocks well and gets to the ball carrier in traffic. As evidenced by his film and power clean, Harris squares his hips and shoulders and delivers an explosive blow.

Harris currently holds offers from Temple, Tennessee, Florida and Florida State. Harris has visited Texas, Florida and Florida State this summer. The Texas coaching staff did discuss extending an offer to Harris in February. It's likely Harris was promised a Texas offer.  Florida and Texas are considered Harris' co-leaders at the moment. Harris' parents have said that Texas has the best facilities they have seen. I think it comes down to Texas' facilities and Coach Akina's reputation vs. a Florida legacy and playing close to home. I haven't read anything about Harris preferring to play in the SEC. I like Texas' chances because Coach Akina starting recruiting Harris early and has built relationships with the South Lake coaching staff. Terrance Larmond worked the Texas summer camps in June. I am concerned that Harris doesn't have seemingly any ties to Texas, but his family seemed comfortable with Austin and the 40 Acres. Florida will be a hell of a challenger here. Coach Muschamp and Florida DB Coach Travaris Robinson are excellent recruiters.

Other names to consider:

George Baltimore, DB Mansfield : Baltimore is listed at 5'11," 188 and is #34 on the 2013 LSR 100, All Name Team. Baltimore doesn't have measureables that Harris does, but he does have a slightly better vertical at 34.5 inches. Baltimore is a two way player at Mansfield, he also plays running back, and is team leader. Baltimore's preferred college position is safety. Baltimore lists Texas, Florida and Texas Tech as his favorites. Baltimore's high school teammate is current Texas commit Hassan Ridgeway. Baltimore could be evaluated by Texas staff in the spring. I would be surprised if Baltimore received a Junior Day invitation. If Baltimore does receive a Texas offer, I expect it will come at the end of the Spring Evaluation Period.

Some believe Texas needs to take a pure safety in the 2012 class. Colin Blake fits the bill ( no pun intended) if Texas decides to take a safety in 2012. Regardless, Texas will offer Marcell Harris in February 2012. It'll be interesting to watch if Texas offers another safety in the 2013 class.

I'll have a write up on 2013 cornerbacks next week. Texas is looking good with 2013 Bastrop CB Antwuan Davis.