In a recurring theme Texas received a commitment from 2012 New Orleans, LA St. Augustine PG Javan Felix. Felix has been on an unofficial visit to Texas since Sunday. It was widely believed if Texas offered, Felix would commit on the spot. Sure enough, when Coach Barnes offered Felix a scholarship, the New Orleans PG committed to Texas. Felix follows D.J. Augustin in a fledgling tradition of top New Orleans point guards playing their college ball at Texas. 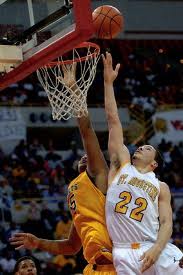 More after the jump.

Felix is listed at 5'11'' 180 and is a three-star recruit by Scout.com. Scout.com believes Felix will be in line for a bump up to a four-star ranking due to his excellent performance this summer.

Strengths:
Javan Felix has a winner's edge, competitor's motor and intrinsict feel for the game of basketball. He owns the DNA of a point guard. He's apt to get it off the glass -- he's a good board man for a guard -- and pitch it ahead to start a break. He's a trustworthy decision maker and pass first point man. In short, picture a sub-six-foot collegiate point guard directing traffic and you have Felix. He's always been part of winning organizations.

Weaknesses:
Felix is a good, not great shooter. He needs to expand his game from behind the line and introduce the mid-range pull up and floater game. He has average speed but by small guy standards, he isn't a burner.

Bottom Line:
Because he plays with an attitude and knows how to run a team, he has great value. BCS level teams will scout him heavily and eventually take the bait. Expect him to be a multi-year starter who wins a ton of games. Joey Rodriguez was a better shooter but their mannerisms and styles are similar.

Texas Basketball has altered their recruiting philosophy this summer. The Horns have cooled on players that haven't performed well during the summer basketball circuit while aggressively pursuing summer circuit stars. Most notably, Texas has cooled on Houston PG L.J. Rose due to his poor showings at summer basketball tournaments. Texas was also pursuing Detroit, WV PG Ray Lee who has had an outstanding summer. It is unknown at this time if Texas will continue their pursuit of Lee after Felix's commitment.

Texas is in the mix for 2012 California combo guard / shooting guard Katin Reinhardt and Flower Mound wing Marcus Smart to round out their backcourt for 2012.

Texas should have a spirited point guard battle next year between Felix and 2011 PG Sterling Gibbs. Myck Kabongo could be an one and done player.