Go Back to Your Shanties, People

Share All sharing options for: Go Back to Your Shanties, People

When PB passed me a link to this story, I read the headline and thought: "Oh, one of many undefeated teams in college football is listed as #1 by a computer after two data points.  Ho hum."  After reading the "journalism" attached to that headline however, I feel that a bit of a response is warranted - If only to put up something for the reasonable among us to point to when the dentally-impaired among us begin their standard refrain of "LOUD NOISES" at the appearance of any potential ammunition against the BCS.

One of the big problems with public debate and opinion is that some very vocal participants are unwilling or unable to realize that an argument's objective soundness is not a function of its support or refutal for their side of the argument (i.e. There may exist stupid arguments that support your opinion and smart ones that refute it).  One side of that failure (not listening to smart arguments against you) is exactly the reason we have "issues" instead of "solutions" in the majority of popular topics in the media from the serious (politics, religion, football, etc.) to the trivial (politics, religion, football, etc.).  The media is no better than the information it carries, and has grown into a machine for fanning the flames in these futile debates with stupid arguments in favor of one side or another, and the tone of this article and the careful choice of facts within it is a perfect example.  This kind of journalism is like the fire department gifting free oil lanterns to the night shift at a grain elevator; they're just looking for work.

I see some of us have already indicated the appropriate response to this story, but I'd like to take this opportunity to point out what's really going on with the Colley Matrix.  This is not an indictment of the Colley Matrix or any other BCS computer poll (this is).  In fact, I would say that the Colley Matrix is one of my favorite computer polls for a number of reasons.  In fact in fact, I will be saying that right after the jump, so put away your pitchforks, douse your torches and click ahead.

The Colley Matrix is really quite an elegant way of providing a ranking.  Wes Colley is kind enough to supply a thorough description of his method on his website, which anyone with a vaguely mathematical degree in college should be able to understand at least conceptually.  I'll summarize here, but I encourage everyone to check it out because it's a really clever way of creating a ranking scheme that's totally objective.

In kind of a hand-waving description, the Colley Matrix method is to rate all of the teams based on winning percentage, then adjust those ratings based on the ratings of the teams they played (their strength of schedule).  Then take the new ratings and adjust them again based on the new strength of schedule derived from the adjusted ratings of opponents.  Then iterate the process until all of the ratings stabilize and quit reacting to successive iterations.  The result is that a team's rating starts off somewhere, then is adjusted by smaller and smaller amounts until it zeroes in on its final value.  Colley runs these upwards of 60 iterations to narrow the errors in the calculation of the ratings down to one part in ten million, so you don't have to worry about computational errors here.  This whole process can be alternately formulated as the solution to a system of N linear equations, where N is the number of teams being rated, which can be solved quickly by certain well-developed methods in the field of linear algebra (it's worth noting here that "quickly" is probably measured in microseconds.  I love technology!).

So, if you'll notice, the only information used to create a team's ratings are the win-loss records of every team - No ad hoc adjustments for home/away, yardage, points scored, points given up or anything else.  With the Colley Matrix, you are guaranteed perfect objectivity; the method doesn't care how you win your games so it can't promote one style or another of football.  Also, you should expect a system like this to give funny results early in the year, since there is so little information available to it after two games, and the system doesn't use the previous season as a seed or starting point.  Ergo, Texas at #1 simply means that the intricacies of the interactions between wins and losses all across the country make the Longhorns' two wins look better than anyone else's after two games.  No controversy, no indication of bias or conspiracy, go back to your shanties, people; there is no monster on the loose - just a bear raiding your dumpster. 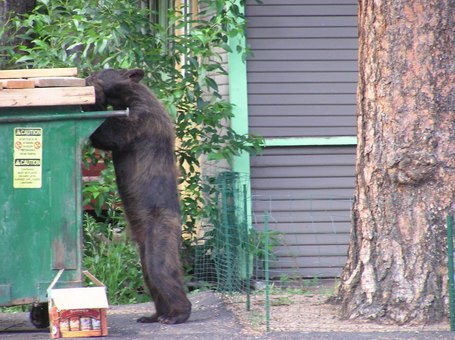 The Colley Matrix digging to the bottom of the information barrel

The Colley Matrix is perfectly objective, but there is room to argue that it isn't perfect.  It doesn't matter, for example, which teams in your schedule you lose or win to, only your overall record and how tough your schedule was.  Imagine if Texas played 10 average teams, 1 elite team, and 1 horrible team, going 11-1 overall.  That's the information that the Colley Matrix sees.  Does it matter if I tell you they lost to the elite team?  The horrible one?  An average one?  Colley stays out of this conundrum because he sees any differentiating between wins as ad hoc.  However you justify it, you're introducing opinion if you change your mind based on which team the loss came from.  You could say it's Colley's opinion that nothing is objective except wins and losses, but I think he would hide behind Occam's Razor and point out that, yes, maybe you're right, but we can't know for sure if you are and this is as simple as it gets.  Colley's method is valid and self-consistent, and therefore merits inclusion in the BCS computer rankings.  It just produces funky early-season outputs due to the lack of information available.  Luckily, that's not supposed to matter until the end of the season.  2008 be damned.