Share All sharing options for: Snap Shots: Texas Struggles with Outside Containment

You heard me mention first half problems with containment in my observations immediately after the game, Scipio Tex pointed it out in his defensive post-mortem, and Big Roy just highlighted it in his notes on the defense as well. Well, let's take a look at exactly what we're talking about, because these kinds of lapses in assignment football are precisely the biggest danger posed by UCLA this Saturday.

This is from BYU's first possession of the game, with the Cougars facing a 2nd down and 10 from the Texas 36 yard line.  (Click any picture to embiggen...) 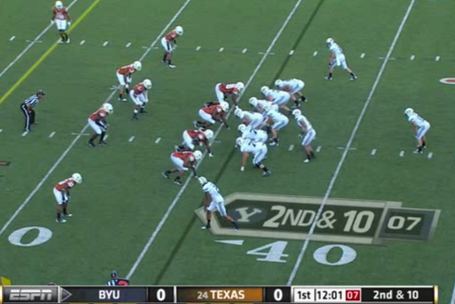 Comment:  Upon motioning a TE/H-Back from right-to-left, BYU has a balanced formation just before the snap, facing Texas in its base 4-3 defense. 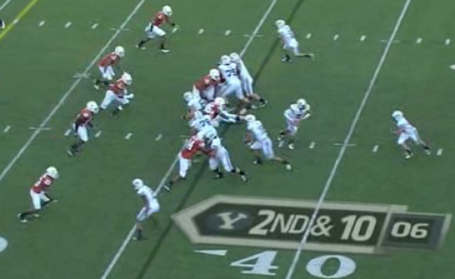 Comment: As Heaps takes the snap and heads towards the running back DiLuigi, you can see that Texas actually gets off to a good start defending this play, which appears to be an inside zone rush by the Cougars. The primary problem for BYU is that the center and left guard fail on their combo block, with the center releasing to the second level as the left guard struggles to establish position on Ashton Dorsey, who has exploded off the line. Additionally, there doesn't look to be much of a cutback option because the right guard's attempt to disrupt Kheeson Randall essentially amounts to what I would do if I had to block Randall: fall to the ground and make him step over me. 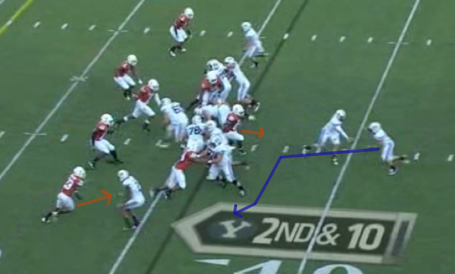 Comment:  As Heaps is about to hand the ball to DiLuigi, you can better see that while there is a hole behind the block of the TE/H-Back, Dorsey's penetration and the lack of a cutback means the only real option for BYU's tailback is to try and bounce the play outside. If this looks painfully familiar, this is precisely the kind of problem that plagued UT's own game the past few years. 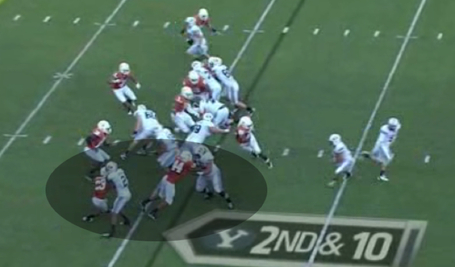 Comment: With this shot you can see why outside contain is such an important assignment. With DiLuigi's hole through the B-gap closed off by Dorsey's penetration and the cutback closed off by Randall and Robinson (who's done a great job sidestepping the center's attempt at a second-level block), his only play is to bounce outside. Texas has two problems, though. First, you can see that CB Carryington Byndom (#23) has gotten himself trapped inside, and second, that this leaves only DE Jackson Jeffcoat to contain the outside and he's bottled up on BYU LT Matt Reynolds inside shoulder. 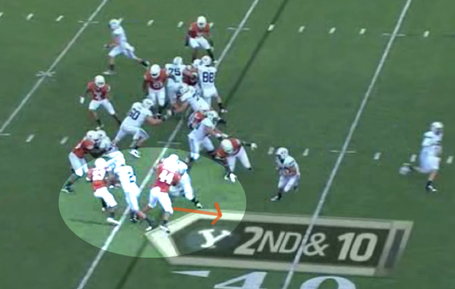 Comment:  A spilt second later you can better see why Texas is about to lose outside containment. Byndom is hopelessly lost inside on the wrong side of a Hoffman block, while Jeffocat is struggling to disengage from Reynolds. 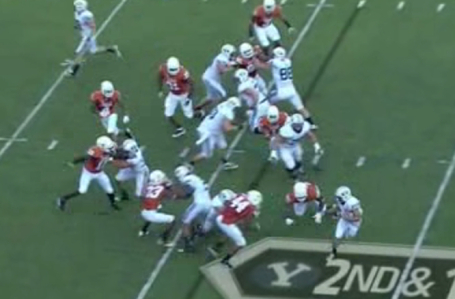 Comment:  By the time Jeffcoat finally breaks free of his block, DiLuigi has the advantage on the angle to the outside and there's no one there to stop him. 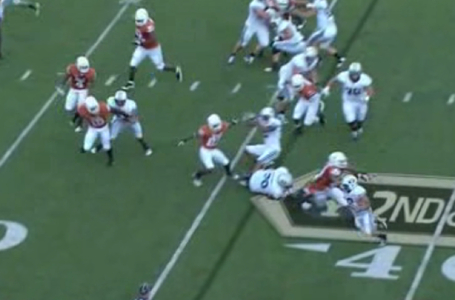 Comment:  Jeffcoat can only flail as the tailback turns the corner, while Byndom has shed Coffman far too late to recover to the outside. 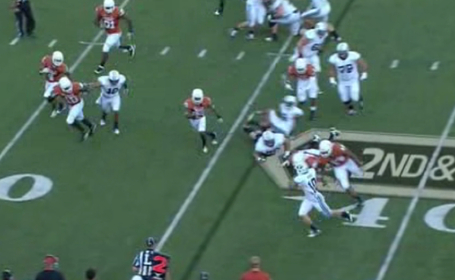 Comment:  DiLuigi takes the corner and gets six yards before Texas can close him out.

This wasn't even the most egregious example of Texas losing outside containment, and it didn't result in a devastating gain or anything, but these are the sorts of little mistakes that can add up to big problems against a power rushing team like UCLA, as they certainly did last year in the Bruins' romp in Austin.

For a look at one of those more egregious examples of the same problem, this failure by Texas towards the end of the first quarter against BYU was particularly bad: 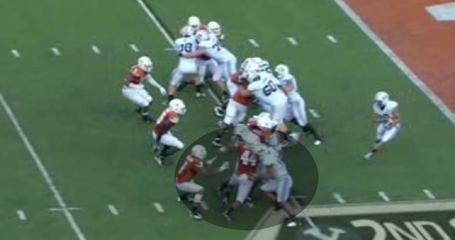 That just can't happen, and if the first example was more a instance of Byndom getting lost and Jeffcoat struggling to overcome a talented left tackle, this snap shot shows a much more obvious assignment failure. That won't do against UCLA if Texas hopes to avoid another long day of successful rushing the ball by the Bruins.