The blocked shot can be one of the most exciting plays in basketball.  A player that can contest shots at the rim provides a tremendous benefit to the team fortunate enough to have him.  Having that last line of defense in the paint can cover up a lot of mistakes on the perimeter. There is a good reason that every NBA team wants desperately to have a guy that can guard the rim.  And it is no accident that the University of Connecticut has won so many titles.

In the first post of this series, I looked at the impact of the blocked shot in basketball.  Studying NCAA Division I basketball, there is a simple (but unsurprising) relationship between the percentage of two point shots blocked and two point field goal percentage.  Additionally, I estimated that a single blocked shot is worth about 0.7 points (give or take a quarter of a point) in the final point margin for a game.

In this post, I want to apply some of of the ideas from my previous blocked shot post.  One way to use what we have learned is to divide all two point shot attempts into two groups:  blocked shots and unblocked shots.  I want to make use of this approach to look at something that I have tackled in the past:  trying to understand the collapse of Texas' defense down the stretch last season.

Last March, I tried to get to the bottom of what caused the Longhorns to falter down the stretch.  Basically, the Texas defense stopped playing at an elite level, and had a number of poor defensive outings.

On the season, when Texas played good defense, they won the game.  When they played poor defense, they lost.  Using the kenpom.com site, you can rank each Texas game by defensive efficiency.  Of their 12 worst defensive showings, 8 were losses.  Texas did not lose a single game when they played good defense.  Contrast this with the list that ranks Texas games by offensive performance.  There isn't nearly the same relationship between offensive performance and wins and losses for this team.

I spent some time searching for the cause of this problem, eventually deciding that from the Nebraska game on, Texas' opponents had become much more efficient in their shooting.

Prior to the Nebraska game, Texas made many of its opponents the shooting equivalent of Jai Lucas.  But in the losses to Nebraska, Colorado, Kansas State, Kansas, and Arizona, Texas' opponents were at least as efficient as Jordan Hamilton and Tristan Thompson.  Even in most of the wins after February 19, opponents were still somewhat efficient.  Baylor, OU, and A&M were much closer to Gary Johnson levels of efficiency...  In the games that Texas won, they held their opponents at or below the Gary Johnson efficiency level.  In the games that Texas lost, their opponents shooting efficiency was as good or better than Jordan Hamilton's shooting efficiency.

Digging a little deeper, I noticed that there was a pretty strong, if unsurprising, relationship between opponent shooting efficiency and opponent field goal percentage on jump shots.

I wanted to see if looking at the shot block percentage data for the 2011 Texas Longhorns, along with data on their opponents' two point FG% might add something to the story.  First, it is important to recall how I am calculating the shot block percentage.  I am following the method used at kenpom.com, and assuming all blocked shots come on two point attempts.  While this is not quite true, blocked shots on three point attempts are pretty rare.  With this assumption, I calculate the percentage of two point attempts that are blocked.  Using this approach, it is also possible to calculate the two point field goal percentage on shots that are not blocked.

The graph below shows the shot block percentage for Texas and the two point field goal percentage on unblocked shots for Texas' opponents in 2011 from the start of conference play on.  Previously, I had noted that in the key Texas losses down the stretch last season, Texas' defense on jump shots (as measured by jump shot field goal percentage) was pretty poor, whereas earlier in the season it had been outstanding.  The graph below provides some complementary information.  It shows that, while shot block percentage jumps around a fair bit from game to game, it wasn't particularly low in the Texas losses to Nebraska, Colorado, Kansas State, Kansas, or Arizona, or in the poor defensive performance against Oakland.  It seems that the unblocked two point percentage tells a bit more of the story. 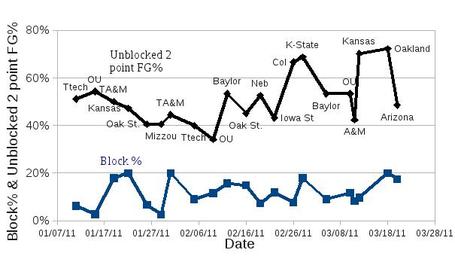 During the extended period of defensive dominance, Texas often held its opponents to less than 50% shooting on unblocked two point shots.  This is very low.  Recall that the NCAA Division I average in 2010-2011 was 53%.  Some of this is likely poor shooting, but some of it is not; teams like Kansas and Missouri didn't typically struggle putting the ball in the hole last year.  And while A&M and Texas Tech weren't exactly offensive juggernauts, these shooting numbers were well below their season averages.  It seems pretty likely that Texas' defense was doing something right when it came to defending shooters.

I decided to dig in a bit further using shot location data from cbssports.com.  I compiled the percent of opponent two point attempts that were taken inside the lane in order to see if opponents were getting closer shots towards the end of the season.  The data don't really allow us to draw broad conclusions, but they are interesting just the same.  In the figure below, I plot the percentage of opponent two point attempts taken inside the lane along with the opponent's field goal percentage on unblocked two point shots.  Oakland and Arizona managed to take many of their attempts from in close, as did Nebraska and Baylor (in their first game against Texas).  Both Colorado and Kansas State shot very high percentages on unblocked two point attempts, but this wasn't because they were shooting from in close.  They actually shot very well on long range two point attempts (both teams had pretty decent 3 point shooting percentages last season, indicating that they were good at distance shooting). 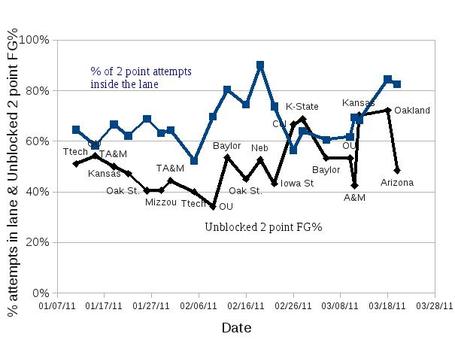 I still am not sure that I have much of a handle yet on what happened to the Texas defense last season, but I can summarize what I have learned.  Earlier in the season, Texas excelled at defending players away from the basket, forcing them to miss a very high percentage of jump shots and unblocked two point attempts.  This facet of defense was the greatest strength of last year's team, and is largely responsible for what got the Longhorns the #2 ranking in the AP poll.  But as the season wore on, this major strength faded away.  Perhaps some of that can be attributed to allowing a few more shots in the paint to teams like Oakland and Nebraska.  But some of it cannot.