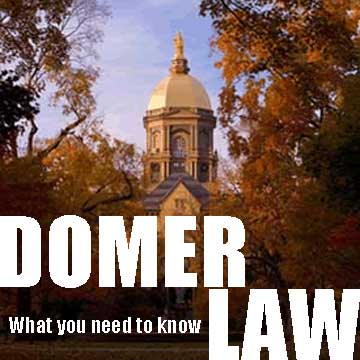 This is just outright plagiarism of Godwin’s Law from Wikipedia. The appropriate terms have been changed so that it appears we wrote it ourselves. Since there really isn't any reason to watch Notre Dame football this year, BON's resident Domer apologist, LonghornEm, took the time to contribute to and edit this article. We thank Em for her contribution.

Domer Law (also known as dimecoverage and Hopkins Horn’s Rule of Fallacies or Domer Law of Realignment Fallacy) is a humorous observation made by dimecoveage (dime) and Hopkins Horn (HH) in 2011 that will become an Internet adage. It states: “As an online discussion on college realignment grows longer, the probability of a discussion involving Notre Dame joining a conference approaches 1 (100%).” In other words, dime and HH put forth the hyperbolic observation that, given enough time, in any online discussion—regardless of conference being discussed—someone inevitably throws out erroneous idea that Notre Dame will join any conference.

Domer Law is often cited in online discussions as a way for a commenter to show their intelligence and knowledge on the subject of college realignment, or to show they have some insider information privy to only a few. The rule does not make any statement about whether any particular reference to Notre Dame joining a conference might be appropriate, but only asserts that the likelihood of such a statement arising increases as the discussion progresses. Precisely because such a statement is never appropriate, dime and HH have concluded that overuse of any language linking Notre Dame with any conference should be avoided, because it shows the commenter is a complete and utter moron.

Although in one of its early forms Domer Law referred specifically to email discussions between dimecoverage and Hopkins Horn, the law is now often applied to any threaded online discussion, especially on the blog Burnt Orange Nation, and has been invoked for the inappropriate discussion among the so-called professional and adept national sports media.

Corollaries and usage
There are many corollaries to Domer Law, some considered more canonical (by being adopted by dime and HH) than others. For example, there is a tradition in many newsgroups and other Internet discussion forums that once such a comparison is made, the thread is finished and whoever mentioned the idea that Notre Dame would join a conference has automatically lost whatever debate was in progress. This principle is itself frequently referred to as Domer Law. It is considered poor form to raise such an idea arbitrarily with the motive of ending the thread. There is a widely recognized corollary that any such ulterior-motive invocation of Domer Law will be unsuccessful.

Domer Law applies especially to inappropriate, inordinate, or hyperbolic statements about Notre Dame and conference affiliation. The law and its corollaries would not apply to discussions covering known mainstays of college realignment such as Texas A&M to the SEC , the PAC 12’s academic superiority, nor, more debatably, to a discussion of other FBS independent schools or religiously-affiliated schools, since a Notre Dame comparison in that circumstance may be appropriate since a Notre Dame comparison in those circumstances may be appropriate, in effect committing the fallacist’s fallacy. Whether it applies to humorous use or statements to your school is open to interpretation, since this would not be a fallacious attack against a debate opponent.

While falling foul of Domer Law tends to cause the individual making the comparison to lose their argument and/or credibility, Domer Law itself can be abused as a distraction, diversion or even as censorship, fallaciously miscasting an opponent’s argument as hyperbole when the comparisons made by the argument are actually appropriate.


History
dime and HH have stated that Domer Law was introduced in 2011 as an experiment in memetics. Domer Law does not claim to articulate a fallacy; it is instead framed as a memetic tool to reduce the incidence of inappropriate statements. “Although deliberately framed as if it were a law of nature or of mathematics, its purpose has always been rhetorical and pedagogical: I wanted folks who glibly stated Notre Dame will join a conference to think a bit harder about the college realignment debate,” HH has written.

1. Flynn, Danny, "Notre Dame to a conference Makes Sense" Bleacher Report, Any day, any month, any year- does it really matter?

2. Christensen, Muhammad, "Notre Dame and Texas are really joining the Big 10. It is true! I swear! I have sources high up in the (insert school name here) athletic department." Canidae News