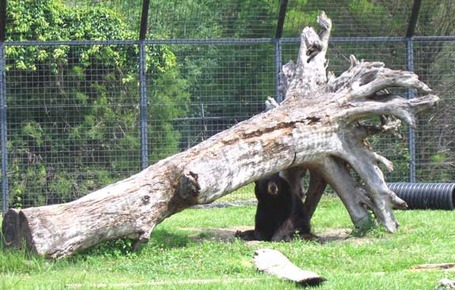 "He was back there forever," Davis said. "But I just believed in him." [Dallas Morning News]

So the younger sibling made a vow to win where the older couldn't — or, at the very least, get out of the stadium in one piece. And all looked fine on that front until late in the first half of Saturday's game against UCLA, when Texas wide receiver Mike Davis looked back and saw his quarterback running for his life.

"I think we made a huge statement," said sophomore quarterback Case McCoy, who completed 12 of 15 passes, including two for touchdowns, in the first start of his college career. "I'll take this any day." [Ft. Worth Star-Telegram]

The secondary was better than advertised. [Dallas Morning News]

The Texas secondary was as good as its been all season. Carrington Byndom, Adrian Phillips and Kenny Vaccaro each picked off Kevin Prince in the first quarter. The Longhorns allowed just 177 passing yards between UCLA's two quarterbacks, Prince and Richard Brehaut.

The kids are growing up. [AAS]

They didn't waste time gawking at the panoramic background of the San Gabriel Mountains or all the other eminently gawkable sights that can be seen in La-La Land.

Instead, they were all about the business at hand on this trip to the West Coast. And that was precisely what coach Mack Brown hoped to see from his young Longhorn football players, who grew up considerably on Saturday.

"They were calling us weak last year," Vaccaro said. "We had to be physical." [San Antonio Express-News] 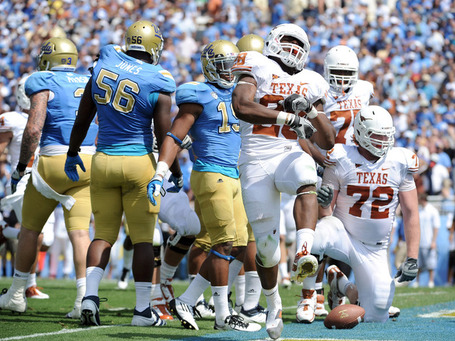 Malcolm Brown had a request. With cameras circling outside a Rose Bowl locker room, he wanted a moment to comb his hair.

His mother, after all, keeps telling him appearances matter.

So a Texas staffer agreed to the request, joking with Brown while blocking the media, and the freshman from Cibolo combed away. With that, Brown's day was complete.

Could this be Mack brown's best freshman class? [AAS]

All in the family. [NewsOK]

Case McCoy isn't replacing his brother; Case McCoy is replacing Garrett Gilbert, who was a flop in 14 games as the UT quarterback.

The Land Thieves beat the No. 5 team in the country. [NewsOK]

The Aggies rolled over Idaho. [Ft. Worth Star-Telegram]

The Jayhawks probably don't want to hear anything about the ACC for a while. [Kansas City Star]

Larry knows. You just have to love the interwebs. Any dullard can call themselves a writer. [Bleacher Report]