Twenty-four hours after one of the most satisfying tailgates and games of my life, I find myself even more excited about the state of the program than I imagined I could be by this point in the season. Now that redemption against UCLA has been fully secured, I also find myself starting to consider the possibility that we had been looking at our defeats to the Bruins the wrong way all these years. Were they, in fact, blessings in disguise?

In many ways they were, considering what followed each devastating loss to UCLA. In 1997, the infamous Rout 66 sealed the fate of John Mackovic and brought Mack Brown to Austin. A year later, the Bruins blow out win over Texas in the Rose Bowl ended the Richard Walton era in Texas and introduced us to... Major Aplewhite, which worked out pretty well. And finally last year our crushing defeat to the Bruins was the beginning of the end of the old coaching regime (my headline following last year's loss: "UCLA 34 Texas 12: Fire Greg Davis") leading us to the revitalized staff that directed yesterday's magnificent showing in the Rose Bowl.

Maybe UCLA hasn't been a curse for Texas, but rather a facilitator of better things to come. If so, what we saw yesterday in the Rose Bowl certainly suggests that trend is going to continue. Texas pounded out one heck of an impressive win that should put the rest of college football on notice: Texas is back. And we're going to compete for titles a lot sooner than you might have thought.

Big Roy has already offered some initial thoughts on Texas' 49-20 win over UCLA, and I'll chime in with a few of my own after the jump.

* We scored from the Wildcat and with a reverse pass from Shipley, but Saturday's offense was mostly an assertion of dominant power football. Boise is known for the trick plays, but they won/win with power football and now that's our identity, too. We pounded it on the ground with 50 rushes for 284 yards (5.7 per) and 4 touchdowns, leaning heavily on Malcolm Brown (22 for 110) with a healthy dose of support from both the speed specialists (mostly Fozzy, who carried 8 times for 64 yards and 2 TDs) and, well, more power (Cody banged out 22 tough yards in conversion situations, including 1 TD while Bergeron came in to mop up the Bruins late). By way of comparison, last year Texas rushed just 23 times for 85 yards against the Bruins, failing to score a single touchdown. 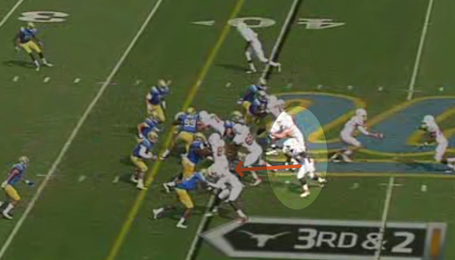 Comment:  As McCoy turns to hand to Malcolm Brown, Texas executes all its initial blocks well: TE Dom Jones gets physical with the playside end and holds him off from the hole; LG David Snow and C Dominic Espinosa combine to clear out the weakside tackle; RT Trey Hopkins blocks the backside end; LT Sedrick Flowers(!) gets popped off the line a bit but recovers to hold his ground; and WR Milese Onyegbule keeps the hole clean on the outside, the beginning of what proves to be one heck of an impressive, physical block. Meanwhile, in the highlighted area FB Cody Johnson is leading into the hole while RG Mason Walters is pulling into it. 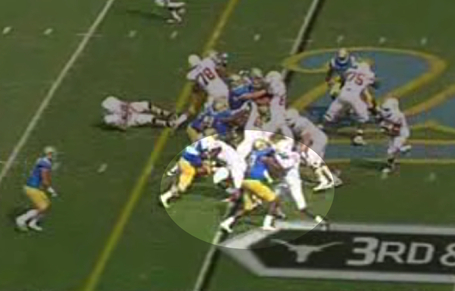 Comment: As Brown heads towards the hole, in the highlighted area you can see Cody Johnson pushing his defender out of the hole, Onyegbule is fully engaged to preserve the integrity of the rushing lane, and Brown can plow into the hole on Walters outside hip. 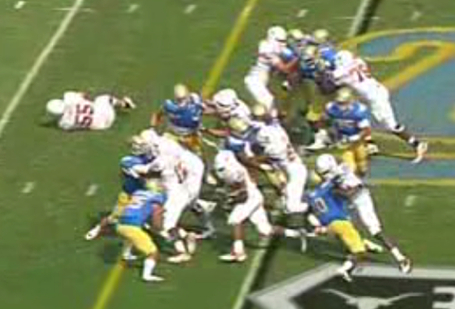 Comment:  As Brow hits the hole, it's game over for UCLA. Onyegbule is finishing off his fantastic block, Johnson is driving his man back, and the only player with a chance to stop Brown has no prayer of keeping him on the wrong side of the first-down line. Texas converts the first down, and one play later puts the game away on Fozzy Whittaker's 36-yard touchdown from the Wildcat.

* That kind of commitment to, and success with, the rushing game makes it a whole lot easier to win with two young and green quarterbacks, of course. Case McCoy did a terrific job of making plays with his feet and his eyes, and though his weak arm almost cost him one big mistake, even that turned out well. Everything else about his performance was impressive, and the difference between him and Gilbert -- a much more physically gifted QB -- was made clear on the game's first touchdown, when McCoy used his feet to buy time, used his eyes to spot DJ Grant across the field, and slung a catchable ball to the wide-open tight end for a 45-yard scoring strike. As for Ash, the coaches continue to use him situationally, and Ash continues to reward them with strong, mistake-free play. He completed all three of his passes, each a success as the defense keyed in on his ability to run the ball.  Great usage of Ash that was really smart based on how we'd used him last week against BYU. When Ash came in, UCLA assumed he was in to run, but on three occasions that running ability was a decoy, and he completed quick passes to pick up first downs. Awesome.

* Note, by the way, that the way the coaches are using these two kids there's no need to manufacture a quarterback controversy.  Just like Harsinwhite are doing a great job using our combination of talents at running back, the coaches are doing a nifty job of using the skills of our two quarterbacks in tandem.  If one or the other starts to struggle, we can talk about whether the staff needs to change the usage patterns.  Until then, I think there's every reason to be pleased that we're seeing both quarterbacks being used.

* It was a great day for my boys DJ Grant and Fozzy Whittaker, who combined for a magnificent five(!) touchdowns on the day. Keep these two performances in mind as you evaluate the coaches' usages of McCoy and Ash. What we're seeing in the early going is that this is a staff that is constantly studying and learning in order to find ways to put players in positions to succeed.  After scoring just six rushing touchdowns over the first three years of his career, Whittaker has scored four already this season -- three from the "Wildcat" formation and one on a screen pass. As for Grant, after catching his first career past last week against BYU (picking up a huge conversion on 4th down), his second career catch went for the aforementioned 45-yard TD strike and he finished leading all receivers in receptions (6), yards (77), and TDs (3).

* Shifting to the defense, I was very proud of the effort on Saturday, even if the performance was far from perfect. Let's start with the four turnovers, which set the tone for the blowout win. Kenny Vaccaro had probably his best all-around game as a Longhorn, and I think we're about to see him start creating turnovers at an Earl Thomas-like clip. Carrington Byndom made a great play on the sideline for his first interception of his career, and I love that he's challenging receivers up on the line. He's still a bit vulnerable over the top, but he'll get there and once he does he's going to be the complete package. Quandre Diggs picked off a pass for the second consecutive game and is playing at the highest level we've seen from a true freshman DB in the Mack Brown era. Adrian Phillips was just phenomenal yet again, forcing a fumble and coming up with a timely pick near the goal line.  Phillips' pick, by the way, was on a ball tipped by Blake Gideon, who also recovered the fumble forced by Phillips (how's that for teamwork?), and for all the grief Gideon's received lately, he had his best all-around game of the season, as well. If the secondary was our biggest question mark heading into the season, the early results suggest we're ahead of schedule and developing a talented, well-rounded, and formidable unit.

* Our linebackers were very active and the pressure they put on UCLA's QBs was a huge part of the Bruins' struggles in the passing game. Keenan Robinson did a terrific job cleaning up sideline-to-sideline and it was a lot of fun to watch Emmanuel Acho turned loose on the backfield. The Bruins found countered nicely and got into a rhythm in the third quarter, but Diaz made some nice adjustments to have his defense close out UCLA's final four drives: punt, fumble, downs, punt.

* The Texas defensive line finished with just 3 total tackles, all by Jeffcoat, but I'll have to re-watch the game to offer more substantive analysis of their play. Tackles aren't necessarily the right measure to evaluate the group, as success for Diaz's defensive line is often about occupying blockers to allow the linebackers to clean up. I also don't recall from my live viewing how much of the pressure on Prince and Brehaut they were responsible for. For now, I'll just say that I like the personnel, and feel pretty good about the tackles developing alongside Randall.

So where does all that leave us?  We aren't yet a complete, fully developed team and we've yet to see this group dominate an opponent for 60 full minutes.  We're young and we're growing, and we have our vulnerabilities.  But from these three performances we are seeing the development of a core identity, and it bodes, very, very well for the future.

I liked the Bryan Harsin hire, but the early returns have me head over heels. We're seeing the maximization of the talent on hand, and an identity based on (1) a power rushing game and (2) targeted attacks on the defense built on and around that power rushing game. I can't wait to take on Brent Venables, frankly.

If last week was a transitional performance, the UCLA game provided the first big step forward in the new era. Who said playing the Bruins was a curse?