Share All sharing options for: Snap Shots: How Bryan Harsin Sets Up Success

It wasn't a whole lot of fun to do frame-by-frame break downs of last year's offense: "Here you see Texas trying another outside zone run and you can see that it's different than the last one because this time the left tackle didn't completely whiff his block, but instead got blown back into the runner."

Reviewing game tape has been a lot more fun this year, and while thus far the focus of the series has been on our execution of certain plays, for today's Snap Shot we're going to look at how Bryan Harsin integrates his play calling, using earlier plays to set up later ones.

The Situation:  Our first series of shots is from Texas' opening drive of the game, facing 3rd down and 4 from its own 26. (Click any picture to embiggen.) 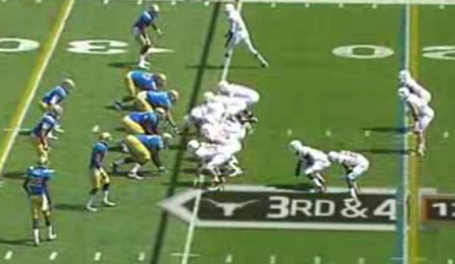 Comment:  Shipley is in the shotgun with Fozzy Whittaker set to his right. The formation is loaded to the field side, with a tight end on the line and a pair of players stacked behind him -- FB Cody Johnson and RB DJ Monroe. 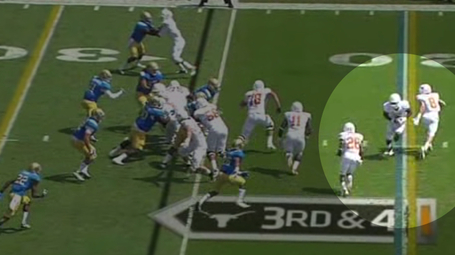 Comment:  After receiving the snap, Shipley gives an immediate handoff to Whittaker, who starts left while DJ Monroe heads right, where Cody Johnson and LG David Snow are pulling as lead blockers. 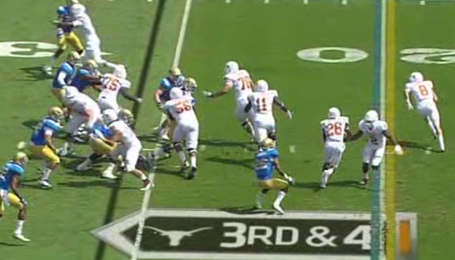 Comment:  Whittaker hands it off to Monroe, making the play like a fancier version of the classic counter. 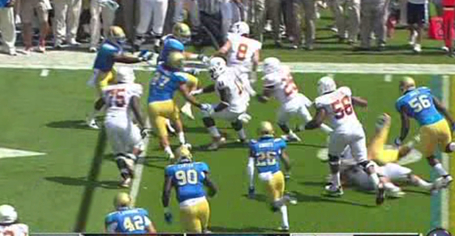 Comment:  Monroe does get the edge but winds up about a foot short of the first down.

The Situation, 2:  Okay, now we fast forward 13 minutes to the end of the first quarter, where Texas has a 2nd down and 7 from the UCLA 8 yard line. 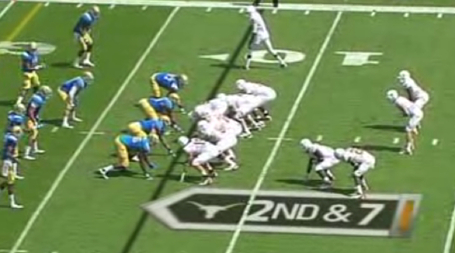 Comment:  Look familiar? Texas is back in the same formation as before, only this time it's Malcolm Brown in for DJ Monroe. Everything else is the same. 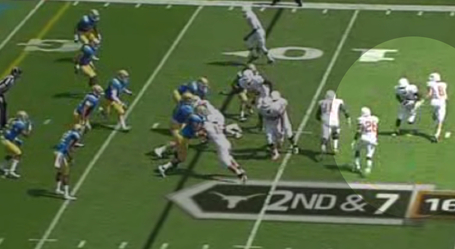 Comment:  Upon receiving the snap, Shipley again immediately hands it off to Whittaker, who again starts left while the tailback -- this time Brown -- starts right.  Note, however, that while Cody Johnson is again pulling to the right, this time Texas is pulling two linemen to the left. 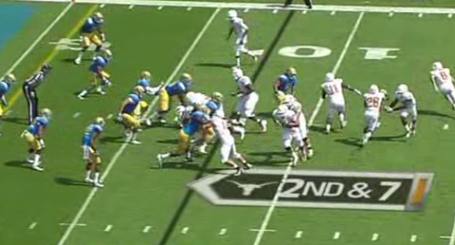 Comment:  I love this shot so much: Whittaker again reaches to the tailback as though to hand it off on a counter, except this time it's a fake -- he's keeping it. And as Texas is pulling two linemen to the left, and Blaine Irby is doing a great job of sealing the playside defensive end, the rest of the Bruins defense is looking right -- looking for that same counter they saw on Texas' opening drive. 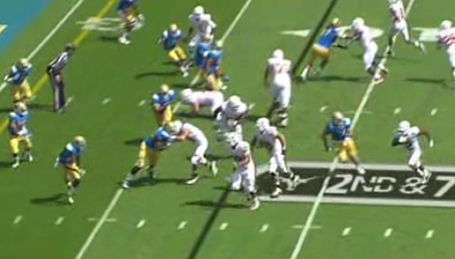 Comment: Fozzy has the angle on the pursuing linebacker and two lead blockers between him and the end zone... 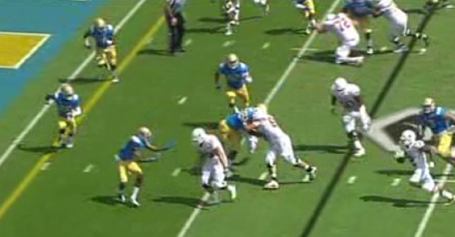 Comment:  Espinosa and Walters do their jobs and it's smooth sailing for Fozzy Whittaker into the end zone. 14-0 Longhorns.

There's just so much to like in this pair of plays. To begin with, I'm a fan of that counter that Texas ran on its opening drive, and it would be worth highlighting as a nice play all on its own.  It's a neat play precisely because it's a counter, but with the addition of a useful wrinkle into that basic play: the handoff to a tailback who has the option to make a handoff to the other tailback on the counter, or keep it himself.  Lo and behold, two drives later Harsin lines Texas up in the same formation, selling the defense on the same play, only this time Whittaker keeps it, and voila, Texas is in the end zone.  And let's not forget that it's Shipley there in the Wildcat.  Who knows what other options Harsin has built into that base play.

There's one other thing about this that I love and is worth mentioning as we approach OU week. I never understood Texas' tendency to sort of tip-toe up to the OU game each year, which among other things had the effect of making the defense's job easier. Sure, there might be a wrinkle or two coming, but the defense knew exactly what to prepare for and didn't have to do much thinking out there.

Contrast that with what we're seeing with this Texas offense this year, where Texas is running a dizzying variety of plays, many out of the same formations. Imagine preparing for that. Your coaches are telling you, "When they line up in formation A, watch for them to run X. But don't forget that it could be Y. And for God's sake remember that they sometimes fake it and do Z!"  The defense has to think out there. Defenders have to wait and watch, and consequently they're slower to react.  That's a huge advantage to the offense, no matter which play, or variation of a play, you're running.