In football parlance, YAC typically means yards after catch, a measure that indicates a receiver's ability to turn a short pass into a long gain. However, there's another YAC out there related to running backs -- yards after contact.

As co-offensive coordinator Bryan Harsin sought to reverse the early trend of starting slowly, one of his major changes for the UCLA game was giving early carries to freshman sensation Malcolm Brown, the bruising back already gaining a reputation for breaking tackles and picking up yards after contact with the first defender.

But exactly how many of Brown's 110 rushing yards against the Bruins came after that first contact? 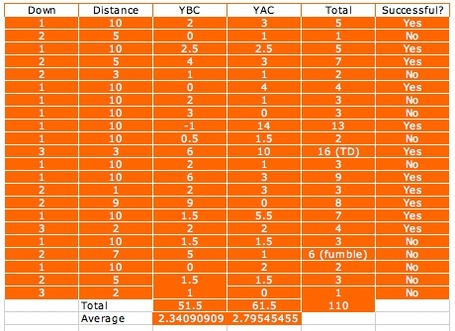 The above chart tracks each of Brown's carries during the game based on down and distance, his yards before contact, his yards after contact, total yards, and whether or not the run was successful based on the formula used by Greg Davis -- a run of four or more yards on first or second down is successful and a run in short-yardage that picks up the first down is successful.

The not-overly-surprising revelation is that Brown gained 56% of his yards against UCLA after first contact -- and that number doesn't even include the yards that he gained after second and third contact on runs like the 16-yard touchdown that saw him break multiple tackles before pushing a defender back into the endzone. Throughout the game, Brown's average of close to three yards after contact meant that even if the offensive line got a poor push up front, the big frosh picked up 75% of what it takes for a successful carry on his own.

Interestingly enough, only 11 of Brown's 22 carries were successful, a 50% success rate worth tracking down the road, although almost half of those unsuccessful runs came late in the game. Normally, that's a time when Brown has worn down the defense, but the guess here is that with Texas holding a significant lead, the Bruins stacked the box to stop the run at all costs, with the Longhorns willing to run into such a front to kill the clock.

While there were some significant holes for Brown to run through at times -- five plays, to be exact, where Brown gained four or more yards before contact -- a major takeaway from this chart is that there's still room for growth with this offensive line in terms of opening up holes for Brown, who finds an excellent balance between patience and hitting available holes quickly and decisively. As much as the offensive line could still improve, the group is playing much better than last season with an actual scheme to work with and the ability to get physical and come off the ball instead of moving sideways so often.

At this point, it's hard to overstate just how important having a running back that can consistently pick up yards on inadequately blocked plays is for the Texas offense. Frankly, it's monumental, representing something the Longhorns haven't had since Cedric Benson left campus after the 2004 season -- a running back in burnt orange and white capable of carrying the load between the tackles, meaning that Mack Brown finally has the beginnings of that power running game he's wanted for years and hasn't had the personnel or scheme  to implement.

And that probably helps the Texas head coach sleep like a baby at night. Well, if he's not kept up from the excitement of it all, that is.