I managed to get my hands on a video of last night's game, which definitely provides a better look at a number of things than did my vantage point in the stands.  I haven't sat down to watch it all just yet, but even before I do I wanted to highlight a couple of illustrative plays from the game.

First up, Garrett Gilbert, who looked awfully stiff and mechanical throughout a very slow start over the game's first 20 minutes.  But if you're looking for a turning point, it came at the 9:45 mark of the 2nd quarter, when on 3rd and 2 Gilbert scrambled out of the pocket, made a nifty cut-step, turned up field and rushed for 24 yards for a first down at the Rice 36. That play seemed to help get him going, as he started to play much looser and better from that point forward.

In fact, it showed up just two players later, on 2nd down and 4 from the Rice 30, when Gilbert found himself under pressure... (Click any picture to enbiggen.) 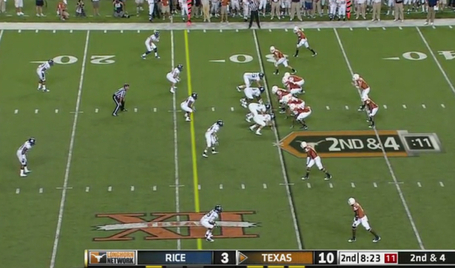 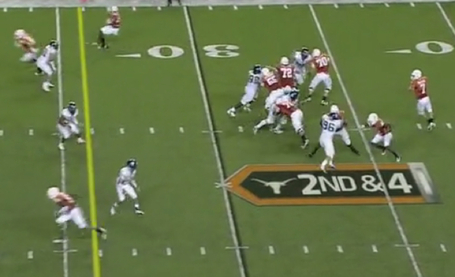 Just after taking the snap, Gilbert appears to have a nice pocket, except that after taking the initial pop from the rusher he's assigned to block, David Snow is slow to reset and loses position, suddenly having to reach to try to hold his block.  Not happening. 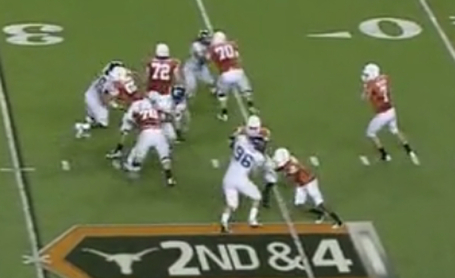 Just like that, Snow's lost him and Gilbert's pretty pocket is about to rapidly dissolve. 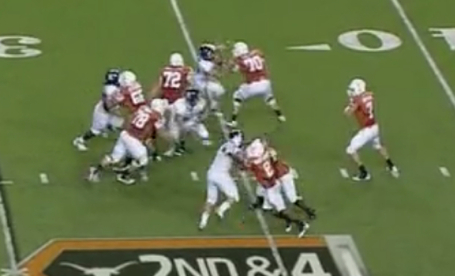 As Snow's man officially breaks free and starts in on the quarterback, the rest of the line has held up well and Gilbert is doing a nice job of keeping his head up and surveying the entire field. 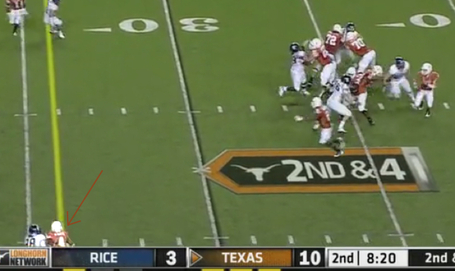 Gilbert does a great job of sidestepping the oncoming pressure, and still keeps his head up and eyes downfield as he does so, which allows him to spot Darius White, highlighted on the bottom of the screen. 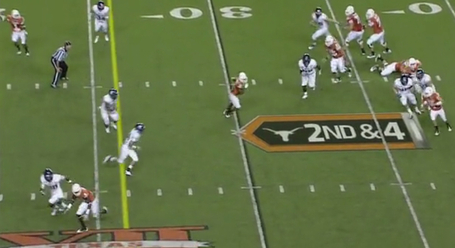 Gilbert uses his feet to buy time and space, while Darius White does a really nice job of recognizing the situation and breaking hard to the outside. 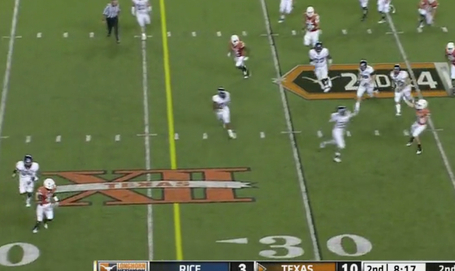 As White creates separation and the defense closes in, Gilbert tosses a catchable ball to White on the outside, who hauls in a first down on a broken play. Colt McCoy used to do this kind of thing all the time, and after Gilbert broke his big run in the 2nd quarter and started to loosen up, he started to doing some playmaking himself. Of course, on the very next play Gilbert missed an open Mike Davis for what should have been a sure 20-yard touchdown, so it wasn't all pretty, but in terms of his comfort level and confidence, this seemed to mark a turning point in Saturday night's game.

Next up: The fly sweep to Jaxon Shipley.