In the previous Snap Shots post we took a look at a nice play by Garrett Gilbert using his feet to buy time and complete a pass on the run. On the very next down, Gilbert missed an open Mike Davis for what should have been a sure touchdown. That set up 2nd and 10 from the Rice 20 yard line, where Bryan Harsin called a fly sweep to Jaxon Shipley... (Click any picture to enbiggen.) 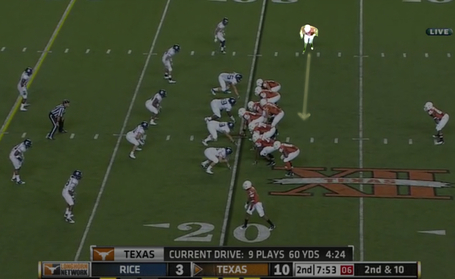 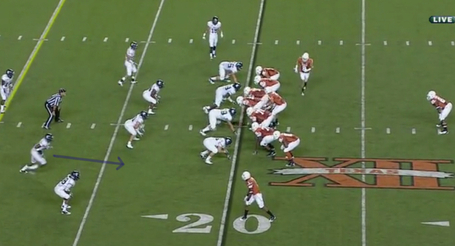 In the snap shot above you see that as Shipley continues down the line, Rice's free safety starts in towards the line of scrimmage.

As the ball is snapped, Shipley is in position to take a hand off (or not, if it's a fake), while the blocking is all down the line away from the direction Shipley is running. The importance of this should already be apparent.

Just before Gilbert hands the ball to Shipley, note why the two linebackers in the middle of the play aren't going to break towards the direction of the sweep: if they're reading the blocks, the blocks all say that this is going to be a run to the right, and if they don't attack that run Texas has a numbers advantage. 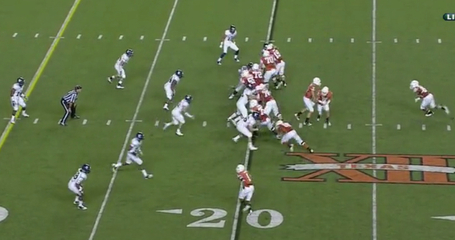 As Shipley actually takes the hand off, you can see that there are two blocks between Texas and a successful play. First, DJ Grant needs to block off the path of the playside defensive end. (After getting called for a low block earlier in the game, it's a bit discouraging to see Grant again diving at the feet of the end he's supposed to block. He'll be hearing from the coaches this week about his blocking, which was not strong.) Second, Mike Davis has to step up and block the fast-approaching free safety. 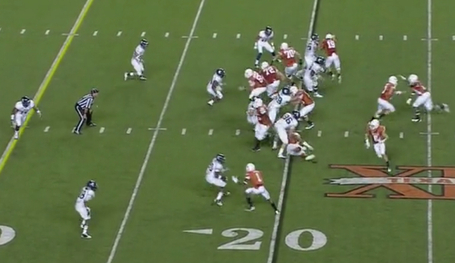 I'm not sure you'd call what Grant did a block, but his plunge at least got in the way of the defensive end, who has no chance at disrupting Shipley now. Meanwhile, Mike Davis has properly identified the man he must block and is about to deliver one of the best blocks of the game for Texas. 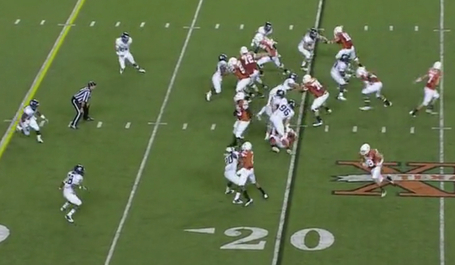 Boom, there it is -- Davis stands up the free safety and Shipley has a safe path to the outside, where the only question is whether he's going to pick up 8 yards or win the race to the edge and take it all the way... 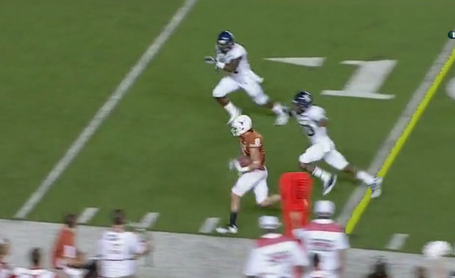 The officials called him out, and though I didn't have a good look at it live in the stadium, on watching this in super-slow-motion several times, I'm pretty sure Shipley got robbed of a touchdown.

Regardless, it was a great play call that was well executed and neatly illustrative of how Bryan Harsin wants to launch specific attacks with specific players against opposing defenses. I won't be surprised if later this season I'm compiling a Snap Shots post in which we see Texas score a rushing touchdown on the exact same play except that it's the fake to Shipley that leads to the touchdown for the tailback.

Next up:  Fozzy Whittaker's touchdown from the Wildcat.