Share All sharing options for: Snap Shots: Fozzy Whittaker Scores from the Wildcat

Those who were for whatever reason discouraged by the performance of the offense need to re-watch the first two drives of the fourth quarter.  I don't want to go overboard because these are just the first steps in a long process, but we definitely got a taste of what this thing looks like when it's cooking when Texas took over at their own 1 yard-line with 1:39 left in the third quarter.

This post is about Whittaker's touchdown rush, but the plays that preceded it in the drive were very nicely conceived and executed. It was a thing of beauty to watch Texas get into a rhythm, increase the tempo, and put Rice's defense on its heels. After a terrifically timed play call that saw DJ Monroe pick up 17 yards on a sweep to the edge, Texas went into hurry-up, quickly banged out a 3-yard run with Bergeron, then sent the LHN announcers into a confused, disapproving tizzy when Gilbert sprinted off the field, as David Ash sprinted on.  But as Ash lined up out wide and Fozzy Whittaker lined up in the shotgun, the announcer quickly let out an "Ohhhh, okay. They're going to the Wildcat."  Moments later, Whittaker was in the end zone to put Texas ahead 27-9. (Click any picture to enbiggen.) 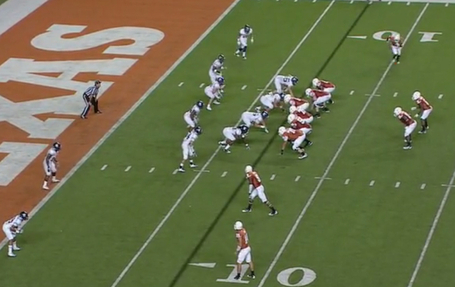 Comment:  Ash and Harris are split wide at the bottom of your screen, while Harsin does something really interesting by overloading the line with Paden Kelley as a jumbo tight end on the strong side, followed by Allen, Hopkins, Espinosa, Walters, and then DJ Grant bookending the line on the right. Whittaker is set to take the snap 6 yards behind center, with Cody Johnson to his left and Mike Davis motioning from right to left. 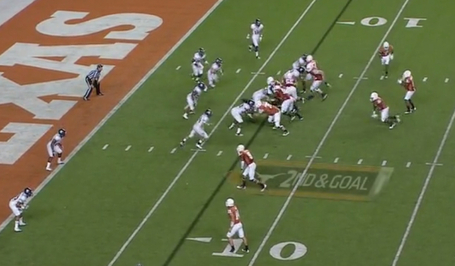 Comment:  As Fozzy receives the snap you can see how the play is designed to work and the blocking assignments of each player. As Walters pulls from right guard, Espinosa has to slide over to try and slow down the backside tackle, while DJ Grant must maintain inside position on the backside end. Kelley and Allen engage the playside end and tackle one-on-one, while Hopkins releases to take on the Mike linebacker. 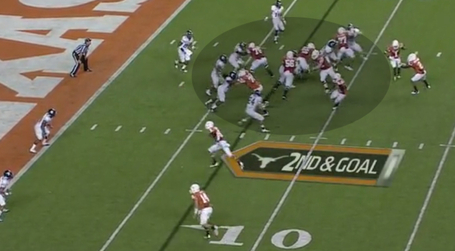 Comment:  As Fozzy fakes the hand off to Davis, you can see the mostly excellent job Texas is doing executing each of the required blocks. Kelley has already driven his man back a full yard, Allen is sealing off his man from the playside, Grant is holding off the backside end, and Hopkins has engaged the Mike. The only problem here is with Espinosa, who wasn't able to get over to the backside tackle in time. 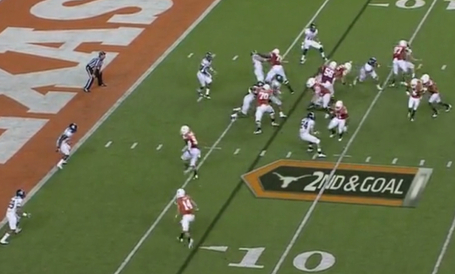 Comment:  A moment later, you can see that unless the backside tackle gets to Fozzy, everything else is shaping up neatly, as Cody Johnson prepares to engage the strong safety and the pulling Walters is now closing in on the Will linebacker. 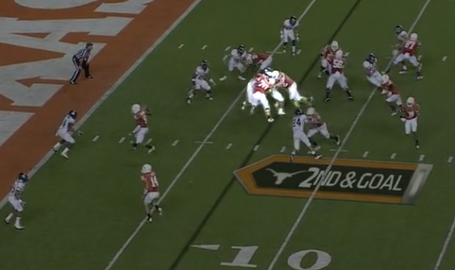 Comment:  Walters arrives and destroys the Will, while Kelley continues what has been a truly fantastic, dominating block. As Fozzy starts his rush you can see that the tackle doesn't have the angle to make a play and the free safety is the only unoccupied defender between Whittaker and the goal line. 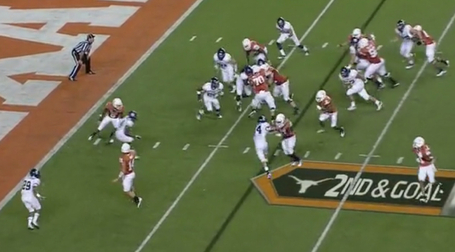 Comment:  As Fozzy approaches the line of scrimmage, the free safety navigates around blockers to try and fill the rushing lane Texas has opened up. 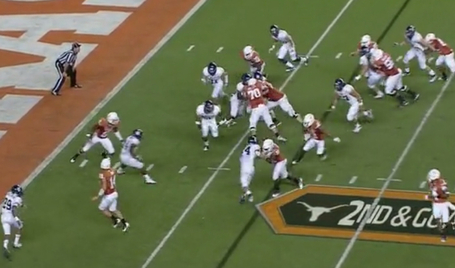 Comment:  Seeing the free safety filling the hole and John Harris missing his block, Whittaker makes a split-second decision to bounce the run outside. 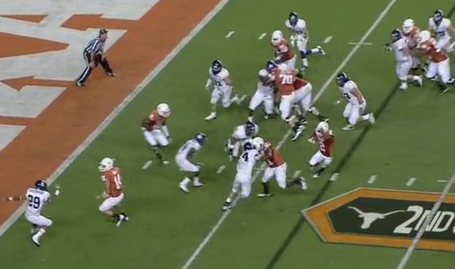 Comment:  Whittaker's decision to burst hard to his left suddenly puts Rice in a difficult position to make a play, as the momentum of the DB Harris was supposed to block was towards the hole Whittaker is now abandoning, while Cody Johnson's block of the strong safety is about to wall off the free safety, as well. 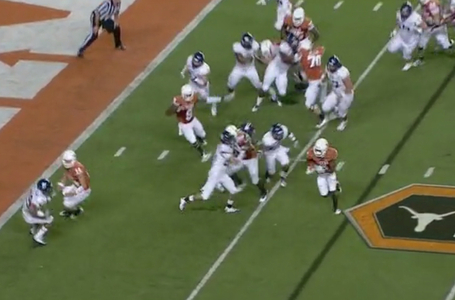 Comment:  As Whittaker gets to the edge, Johnson essentially blocks three defenders, and it's a race to the end zone between Whittaker and the cornerback by Ash. 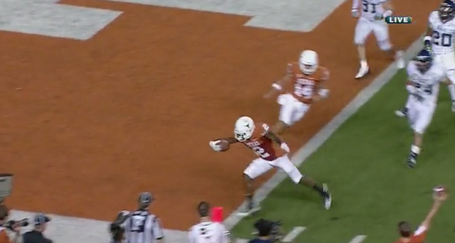 Comment:  Whittaker's too fast, turns the corner, and gets into the end zone to put Texas ahead 27-9.