One of the greatest, most fantastic assurances that Greg Davis's reign of terror ending provided was the knowledge that after the Rice game this fall, Bryan Harsin was not going to sit in the interview room and make excuses about why he couldn't play DJ Monroe. Not even the smallest chance.

A hashtag and an outcry started nearly a year ago, a sentiment grown and bred over about a year itself. Free DJ Monroe. #freedjmonroe

See him over there, standing on the sideline, probably with his helmet on, paying attention to the proceedings on the field, wondering if he'll be called on to pick up his eights yards per carry, maybe run until he can't run until the endzone stops him down 14-0 against the real bitter rivals of the Horns.

He was sad. Down in his soul, knowing that his talent was being criminally abused by Greg Davis, Donald Junior Monroe was undoubtedly sad.

And we were sad, we Texas fans. Largely for selfish reasons, of course, but also because it's sad to see talent wasted by outside ineptitude over which the individual has no control. Anywhere in the world -- that's the very nature of injustice.

Consider that Monroe scored a touchdown on his first touch as a Longhorn. His first. That should tell you something about his potential. Let me spell this out for you Greg Davis, wherever you are not coaching football -- Donald Junior can find the endzone any time he touches the ball. Film don't lie, bro.

Problem was, opponents gave the ball to Monroe during his first two seasons at Texas nearly as much as Greg Davis did, as Monroe returned 37 kicks in those two seasons, but apparently earned only 46 carries. Doh!

Stop and think about that some more, considering as well that opponents didn't even want to kick the ball to Monroe at times because he was so dangerous.

Monroe even improved his average yards per carry with that 60-yard touchdown run against Oklahoma, but why would that convince Davis to stop making excuses every week and just give him the stinking ball?

Take a deep breath though, gentle reader, because out of those dark depths grew a hope, a hope that one day a new offensive coordinator would set him free, would see him standing over on the sideline and think, "Hey, I would like to pick up eight yards and have the chance to score a touchdown here. That would be a brilliant play, whatever play it is! Just add a little creativity and things will be perfect! Even just a dash will do, but the more the better!"

Freed DJ Monroe, the dream. And then it happened. Bryan Harsin in, Greg Davis out. Harsin's hiring is as brilliant as Monroe's speed and marked the beginning of the end of Monroe's personal nightmare.

Smart man that he is, Harsin began to design a package for his brilliant talent, aided and abetted by Major Applewhite, who may have been the only Texas offensive coach chafing at Monroe's sideline incarceration in 2010, because during Harsin's introductory press conference, Donald Junior's name was the only one of any player on the roster dropper by Applewhite that day. The only one. And that hope turned to belief.

In the spring game, even the most base ways of getting him the ball turned belief into a near-reality, only waiting for that first play during the fall when it would become apparent on the football field against an opponent that DJ Monroe would truly be freed.

The official moment, that glorious Hallelejuh, came near the end of the first quarter. Not overly long to wait, as expected. See for yourself. 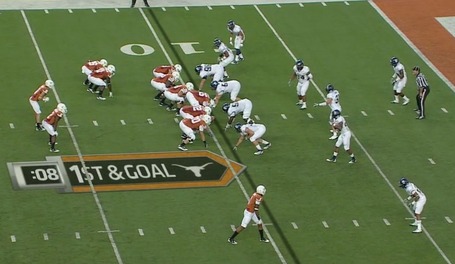 The Longhorns line up for the first time in the triple option Wildcat hinted at by the Asset over at Barking Carnival during fall practice. Notice the six offensive linemen, with Cody Johnson and DJ Monroe both in three-point stances behind the left-most tackle, Paden Kelley, Jaxon Shipley as the triggerman and Fozzy Whittaker to his right, and Mike Davis down to the bottom of the play. Looks fun, right?
Not for the Rice linebackers, looking at each other wondering what they want to do. Part of the inherent beauty of #freeddjmonroe, take one. Never replicable. Too bad there's no camera angle on their faces. 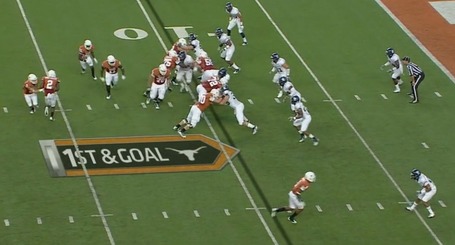 Shipley hands the ball of the Whittaker headed right, while Monroe and Johnson start heading to the field's wide side with David Snow for accompaniment. The linebackers take a little hop and freeze, trying to figure out what in the heck is heading at them and what they should try to do about it. 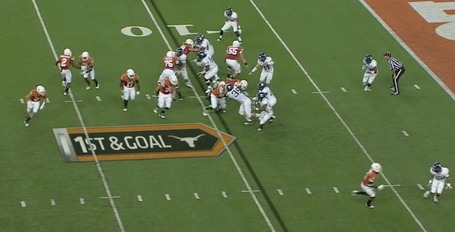 Whittaker hands the ball off to Monroe, while Shipley takes the turn heads out to try to throw a block. Reading the flow -- hey, there's the answer -- the linebackers head to try to beat the armada (DJ Monroe has an armada! DJ Monroe has an armada!) of Texas players to the edge before Monroe can turn the corner into the endzone, pending some success by Mike Davis over there near the endzone.

The first sign of anything bad happening is Scott Solomon, the best Rice defensive lineman, standing up right tackle Mason Walters before shedding him in this image and heading playside. It would be tough for Walters to get beat any faster than this.

But notice on the backside that the contain player is still doing his job, but if the tackle out there can get his block, Fozzy's one-on-one with the safety to paydirt, had the play gone that direction with the same blocking scheme. Not bad prospects for picking up yardage, something Harsin surely notices, with a complementary play in his playbook to take advantage of that matchup, maybe even block it a bit differently to get to that contain player Cody Johnson lead block perhaps?

Note: The sheer Not Greg Davis awesomeness of that simple speculation and this whole package will take a while to wear off. Still in the giddy phase. Anyway.

Monroe heads to the edge with his friends, four Rice players with the opportunity to bring him down, Solomon and the three linebackers, with Solomon and the playside backer the most dangerous. 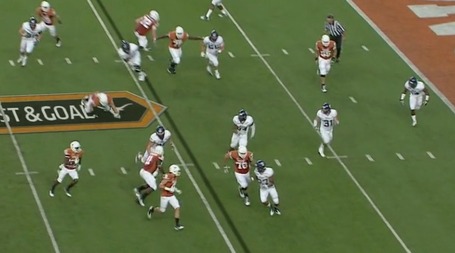 Unfortunately for the greedy, David Snow has trouble getting to the Rice playside linebacker, first to the play. An acceptable but not ideal effort by Snow in an offense that will ask at least several of the linemen to move well in space. This is gonna be about a C result for Snow. Of course, it would be remiss not to mention Cody Johnson's strong effort to clean up the mess made by Mason Walters in kindly removing the pursuing Solomon from the play with a nice block, as he's about to take out Solomon. 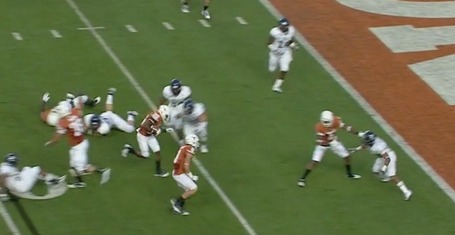 Shipley went past the playside linebacker, didn't help Snow, and didn't end up blocking anyone, so he's not entirely without fault, either, as Snow gets his defender to the ground, always a positive, but notice how Monroe had to cut inside Snow and the Rice defender, keeping him from the edge and allowing Mike 'backer Justin Allen to make the play. This is why the fast guys want the edge -- it's simple, it's away from the pursuit and why as a blocker it doesn't help to run past defenders in pursuit who can take away that edge on runs like this. Or fail to completely get there in the first place.

His averages from last season suggest that DJ Monroe should pick up eight yards a pop on running plays. On this play, the #freeddjmonroe moment, he only picked up seven. Still satisfying, right? Since he's free and all and only a little better execution could have easily led to a touchdown on this play instead of the measly seven yards gained. The measly is sarcastic by the way.

These were seven redzone yards, some of the hardest in football. 1st and 10 from just inside the 10 is not fun. Even average expectations mean really good things in the effort to consistently move the ball down the field. Texas scored a redzone touchdown in large part because of this play and that's a major success after 2010.

Now, just imagine the other plays in the series.

Then let yourself drift away from that mental exercise and fully revel in the glory of #freeddjmonroe.