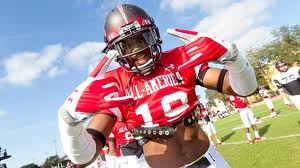 Jenkins became the 9th commitment in Texas' 2012 recruiting class when he committed at the Second Junior Day JD2). However, Jinkens wasn't your typical early commitment. He skipped Texas' First Junior Day (JD1) to attend a Junior Day at TAMU. When Jenkins didn't receive an offer from the Aggies, Texas became the favorite to land Jenkins. He let be known that he would commit to Texas if offered, and the Texas coaches invited him to JD2.

It was rumored that Jinkens was approved for a Texas offer while Will Muschamp was still the Defensive Coordinator at Texas. Jinken's offer from Florida would certainly validate that claim. There was some thought that Florida could become a player in his recruitment, but it never materialized.

Jinkens has been solid to Texas since his commitment, but he did tinker with the idea of visiting other schools after Dallas Skyline teammate Thomas Johnson decommitted from UT. After the Texas coaches suggested that other visits weren't a good idea, Jinkens reaffirmed his commitment to the Horns.

Jinkens is the highest ranked senior LB in the final Rivals LSR 100.

Peter Jinkens scouting report: Jinkens left the game during the third quarter with a minor injury, and didn't return largely due to the score. I'll buy he is his listed 6'1'' 200 pounds. He is well known as a quick metabolism guy, but I think he can put on good weight in a college nutrition and weight program. I could see him playing at about 225 as an upperclassman.

Weight concerns aside, Texas is getting a good one. Jinkens wore a do rag like Deion "Primetime" Sanders and he wore the playmaker label well. Before he left with an injury, it seemed as if he was in on every tackle. Great recovery and closing speed, flies to the football. He heard his name called all night. I was very impressed with his open field tackling. He prevented several long gains. I liked his speed coming off the edge as a pass rusher. I didn't see him get a sack, but he had some hurries and got into the backfield at will.

He had 2 carries for 44 yards, including a long 42 yard run that set the tone early. I saw a sudden, fast athlete in Jinkens. He's better suited for linebacker, but he is Skyline's best running back. He is a tackling machine.

It's easy to see a lot of Corey Nelson in Jinkens, but I also see some Travis Lewis. I know a lot of people aren't in love with Jinkens' size, but he is a disruptive defender. I think he should be redshirted, but he might force his way into special teams action early.

I think much of my initial scouting report remains true. Jinkens performed well for Skyline in the playoffs, and had an excellent week at Under Armour All American Game. I think his greatest strength is his speed. While I don't believe his listed 40 time to completely accurate, he can flat out fly. Jinkens actually posted a faster 40 time than Johnathan Gray at The Opening.

Jinkens drew rave reviews at the Under Armour practices for his coverage ability. I think he will be able to stay with most RBs, slot WRs and TEs in the Big 12. This gives DC Manny Diaz plenty of freedom to line Jinkens up at different positions in different looks. I would like to see more of Jinkens off the edge, but he is reputed to be an excellent pass rusher. He has been compared to current Texas LB Demarco Cobbs, but I think Cobbs has a better frame and will be able to carry more weight. I think Jinkens could play a hybrid safety / nickel LB role at Texas. Strong enough against the run to be a 3 down player, but versatile enough to play some safety / nickel back in passing situations.

Jinkens has been able to put on about 10 pounds since the spring, but as I mentioned above he's a high metabolism guy. His diet could be just as important as his weight room work at Texas. Get him on a diet that will allow him to pack on good mass without losing quickness, and he has All Conference potential. I think 220-225 is a reasonable weight for Jinkens to play at as a senior. For some perspective, Oklahoma OLB Corey Nelson played last season at 215 and his teammate Travis Lewis weighed about 225 as a senior. 220 + can get it done in the Big 12 as an OLB. Jinkens will obviously need some help in the run game. That's where MLB jackhammers Steve Edmond and Dalton Santos come in. Edmond and Santos are expected to crash the middle, and funnel runners to the outside where the speed defenders can clean it up.

With his speed, I believe Jinkens will find a position at Texas eventually. Manny Diaz loves what he has in Cobbs, and Jinkens is expected to fill a similar role. Jinkens should see the field early as a special teams terror. It wouldn't be unreasonable to predict that Jinkens will lead the team in special teams tackles as a freshman.

Dallas Skyline is a very important school for Texas recruiting, and I'm happy to call Peter Jinkens another weld in the pipeline. Hook 'Em.