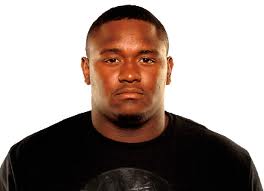 My take: Riser's recruitment was a shorter one that expected. He committed at Texas' First Junior Day (JD1), despite reputed interest in LSU. It was believed that Riser would be a Texas vs. LSU battle, but after Riser cancelled his visit to LSU in early February 2011, it was all but certain that Riser would be a Horn.

Riser and Stanford commitment Josh Garnett are widely regarded as the top OGs in the country. Riser is without an equal in state at his position.

Riser was an Under Armour All American, and a top 100 player per Rivals.com.

Riser is a very strong run blocker both on and off the line of scrimmage; will need to polish aspects of pass protection however we like the nimble feet he displays. Has the size and athleticism for the offensive tackle position at the major level of competition. From a two or three point stance we see a blocker with good flexibility, balance and agility; comes off the ball with a flat back and good fit; displays the explosion necessary to get immediate movement when drive blocking and is capable of digging out defenders in goal line situations; plays with a good base and leg drive, maintaining contact well beyond the line of scrimmage. Does a nice job when asked to pull and trap; quickly gets out of his stance and up-field, demonstrating the ability to locate and block on the move. This guy demonstrates the initial quickness necessary to get a hat on active 1st and 2nd level defenders and we are confident he is capable on making all the run blocks at the next level of play. We see a tough customer with the nasty finishing attitude we look for when evaluating offensive linemen at the BCS level of play. Displays good quick and short set skills; can bend and slide his feet however we see him play too tall at times. Must improve his immediate location on initial punch, putting his upper body playing strength to good use; gives a good effort working to keep his hands in the frame with proper extension. Although Riser does not appear to be an immediate starter and it's possible he could end up inside at the offensive guard position we feel his size and playing strength are worth evaluating at the offensive tackle spot.

I had the opportunity to see Riser in person at the DeSoto - Skyline, and I wasn't disappointed. Make no mistake, Riser is college ready. Riser played mostly OT at DeSoto. First at RT as a junior and at LT as senior. He is adept at pass protection, but he excels at run blocking. This strength and being an inch or two too short are likely the reasons Riser projects an OG.

Riser had a particularly nice sequence against Skyline where he stood up his man, drove him backwards and opened up a semi truck sized hole. Senior RB Devin Rushing scored a long touchdown on the play.

This is what you look for in an OG, a player with the athleticism to play OT, but is a better fit at OG. Riser is said to be a favorite of Coach Searels, and was only one of two OGs Texas considered for the 2012 class. Texas evaluated, but passed on Texarkana OG John Michael McGee.

I believe Riser could play OT in a pinch. If he continues to grow, he could get a look at the position. Riser will have to have a good summer and Fall Camp to pass more veteran players in front of him, but he is considered college ready. It wouldn't surprise me if Riser saw meaningful snaps at OG, and possible action at OT in blow outs as a freshman. I think Mason Walters, Trey Hopkins, Sedrick Flowers and Riser will be Texas' 4 best interior linemen by the end of the 2012 season.

Coach Searels is getting a college ready OL from a pipeline school. Always a plus. Hook 'Em.