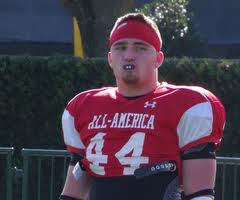 Santos could be Steve Edmond's primary back up at MLB as a freshman. (Photo Courtesy of SBNation)

My take: Wow, now that's an offer list. Santos realized a life long dream by committing to the University of Texas this past Sunday. He was the 26th commitment in the 2012 Class and the fourth linebacker.

The Texas coaching staff missed Santos in their initial evaluations of the 2012 class. While visiting Van High School during the spring evaluation period, Coach Searels discovered Santos. Searels was in town to look at other prospects. Searels learned that Santos was a life long Texas fan, and passed the rising recruit's information to Texas DC and LB Coach Manny Diaz. Diaz personally called Santos to apologize. Diaz also promised Santos that if a spot became available in the 2012 class, that Texas would recruit him.

I followed Santos' recruitment with mild curiosity after I learned Manny Diaz called him to express Texas' interest. When ESPNU ranked him as the best ILB in the country, I began to seriously pay attention to Santos. I hoped a Texas offer would come, and I'm thankful it did.

Santos' recruitment was a long and winding one. He initially committed Oklahoma State as their first commitment, but quickly opened it up again. In August, he choose Tennessee over TAMU in a ceremony that left many Aggies steaming. Despite defensive coaching turnover at Tennessee, Santos planned on honoring his commitment until Texas came calling. When Texas approved him for an offer, his official visit became little more than a formality before he committed to Texas.

I don't have any issues with how Santos handled his recruitment. He went through all the proper channels and was very polite to the Tennessee staff. Texas was his dream school, and he followed his heart.

Santos was an Under Armour All American, and rated as a 4 star recruit by 247 Sports and ESPNU. ESPNU ranked Santos as the best inside linebacker in the country.

Santos is a dominant run stopper from inside to the edge; his excellent instincts and immediate reactions allow him to create havoc in the backfield. Has the size and athleticism for the inside linebacker position at the major level of competition. This guy is a tough customer; displays very good balance and explosion when tackling; will punish and knock ball carriers back where they came from. We feel this player has the potential to be an early and productive special team's player. Although we detect some lower body stiffness when dropping into short/medium zone coverage his overall balance and agility get him to the football consistently; does a very good job with key and diagnosis skills against the run and pass. Moves through traffic very well; can fill gaps and beat blockers to the ball regularly. His downhill toughness is what we look for when evaluating inside linebackers; has the playing strength to take on and defeat blockers at the point of attack while his run blitz sets up many tackles for loss. This guy is a factor to recon with when attempting to run the ball inside or off the edge. We see a very smart football player in coverage although one who will need to be carefully game planned when given man coverage assignments; does a good job in zone coverage; gets into throwing lanes as a result of his ability to read underneath routes and focus on the quarterback's eyes. This an athlete who brings it all to the field, resulting in momentum changing plays. Santos' size, toughness and intellect could get him early situational playing time on defense as his collegiate career begins.

The first thing that jumps out at me about Santos is his size. He is built like a brick outhouse. At 6'3'' and over 250 pounds, he has the prototypical frame for a SEC middle linebacker. He excels as a run stopper, but I think there's more to his game than that. His coverage skills obviously need work, but I saw some flashes in his film of a recruit with complete linebacker potential.

I enjoy watching Santos play. Reckless abandon, total disregard for his body and the body of his opponents, mean, nasty, intimidating. Watching the Under Armour Game, I thought Santos might kill someone. This was in an all star game.
Santos demonstrates in his actions and in his words that he wants to be the baddest man on the field. He's spoken of making the Texas defense nasty again. Well Dalton, it's already pretty nasty, but Manny Diaz is open to improvement.
Very simply, Texas needs to get more players like Santos. Nasty big guys that hit like a truck. The kind of guys that remember Texas is playing OU, and it's time to hit bring the pain. Steve Edmond is said to be one of the hardest hitters on the Texas team, and it won't be long before Santos is right there with him. Manny Diaz has expressed a desire to crash the middle with a large MLB and funnel the run defense to the edges where Texas' speedy DEs and OLBs can clean it up. It's usually preferable to have an opposing offense moving laterally instead of vertically in the run game. In Edmond and now Santos, Diaz has his sledgehammers in the middle.
Santos is not as talented as Steve Edmond, but he is better conditioned. I expect Santos to be a big contributor on special teams, and become Edmond's primary back up at MLB. When Edmond needs a breather, expect to Santos on the field.
Santos weight could become a concern, but with Bennie Wylie all over Edmond, you can expect him to stay on Santos. I don't see an issue here, from all accounts he is a hard working young man. If Texas can keep him lean and improve his coverage skills, he could be an elite MLB at Texas.
Some friends of mine emailed me to congratulate me on the Santos offer. He was one of my guys, and I couldn't be happier that he's a Longhorn. Hook 'Em.