What were Texas fans tweeting during the OSU game?

This Saturday's Texas game was the most stressful football game for me in several years. I think I know why; this team is starting to make me believe again. Games are only stressful to watch when there is something at stake. It feels like, for the first time since January 7, 2010, that something is once again at stake.

The stress is back, and that is good.

Part of being a fan is that it is irrational. I am a rational guy, perhaps almost to a fault. And yet, I spent the fourth quarter of the game standing in my living room, refusing to finish my seltzer water, after surmising that Texas was better when I was standing up. My dogs didn't join me, but napped on the rug instead. They weren't feeling the stress.

When red-blooded football fans switched their televisions from the Ohio State / Michigan State game over to the Fox network, they were greeted by a... baseball game. This offense cannot stand.

Of course, the Texas game wasn't ready to start yet, so it was no harm, really. Except for those of us who are fans of Joey Harrington. (My advice to Joey: You are on national television. Pay someone to cut your hair. The days to save money by using the Flowbee have passed.)

The problem with preseason narratives

#longhornnation, everyone was worried about David Ash this season. I think we better b worried about our defense! #Hookem #HookEmHorns

When looking over the Twitter commentary this week, I was struck by how much the perception of this team had changed. Coming into the season, most Longhorns fans were expecting a great defense, with a mediocre offense and questionable quarterback play. It is pretty clear that is not what we have with this team. This is the problem with preordained narratives; they are great until lousy facts show up.

The fan attitude towards this team is made clear in the graph below. The black line is the negativity index, which is a composite of tweets containing a list of key words that suggest unhappy tweeters. Most of these words are obscenities. The blue line traces the tweets that contain the word "defense." The green line represents tweets about David Ash. The green line is actually the number of tweets about David Ash divided by four; there are so many tweets related to the Texas quarterback that I have to rescale the data to make it fit on the graph with tweets about the defense. 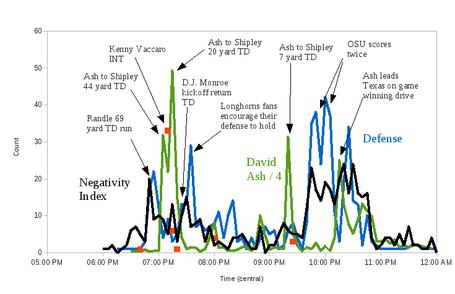 When you look at the graph, you see that an increase in tweeting about the defense seems to coincide with spikes in negativity. There is one exception to this; after the D.J. Monroe kickoff return for a touchdown, Texas fans were trying to use Twitter to encourage the defense. Tweets about David Ash were almost entirely positive.

Here are several tweets that nicely highlight this change in perception.

It's official.Defense bought into the hype.They are the worst unit on the field.Lets hope offense can keep pace #hookem

The words "tackle" and "tackling" appeared often. Although to my uneducated eyes, Texas' problems weren't entirely tackling related -- though tackling was certainly part of the problem. There were many obscenity filled tweets about the Texas defense all night long, including one or two calling for Diaz to be fired. (It feels a bit early for that.)

It is hard to find tweets that express fan opinion on the Texas defense both colorfully, and without foul language. I could print some of the non-family friendly tweets, but since my mom might read this, I won't. Here is one tweet that I can print.

does the UT defense know how to stop the run? #longhorns #ncaafootball

Somehow I suspect that simply knowing how might not be enough.

David Ash is becoming a star

Here is David Ash's final drive of the game, captured via Twitter. At the start of the drive, Texas fans understood the significance of this series for David Ash. Here are a couple of the many tweets that reflect this.

Time to see what Ash is really made of. #HookEm

It's all on you Ash. Make it happen. #HookEm

Ash's big fourth down conversion was one of the highlights of this drive. Just like me, several twitter users thought Texas should have called a time out prior to the play. But what do we know? (If I have learned anything watching Texas over the years, it is that when it comes to end of game clock management, Mack Brown is usually right. A timeout would have given OSU more time to score on the following drive.)

Wow! Huge play on 4th down by Ash and DJ Grant. I thought Mack should have called a TO there. #HookEm

And then there was the throw to Davis.

David Ash has convinced me he should be the starting QB for the #Longhorns . Throw to Davis?!? \m/

It was only a month ago that Texas fans felt that Ash was likely going to be the weak link on this team. This has not happened. I suspect that Ash has exceeded even the most optimistic expectations so far this year. As a Texas fan, I am starting to feel more confident in him; he is not at the McCoy or Young level in terms of fan confidence yet, but he is making me remember what it is like to root for a team with a quarterback that I believe in.

When scanning through some of my summary data this week, I noticed the hash tag "#BoomerSooner" had been picked up in my search. This could mean only one thing -- someone was trolling. Sure enough:

Ah didn't impress me at all longhorns. Defense showed holes for sure. #BoomerSooner

What were your favorite tweets of the week?