Mike Gundy: "I Think He Fumbled"

The Oklahoma State head coach had a chance to review Texas running back Joe Bergeron's last-second touchdown and weighed in with his opinion on Sunday night.

Share All sharing options for: Mike Gundy: "I Think He Fumbled" 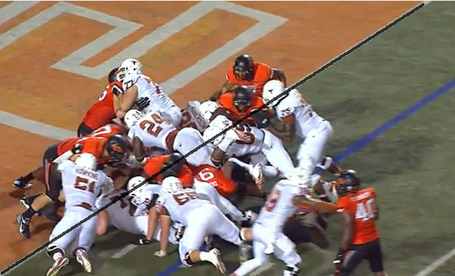 In the immediate aftermath of the game, Gundy couldn't really say much about the play other than what he was hearing from his own player, likely safety Dawtayion Lowe, who supposedly emerged from the pile with the ball when it was all said and done:

Our guy said [Texas] fumbled, and he got it. That's why I was running down the sidelines. I didn't see it because of the pile, but our guy said the ball was fumbled back here, flipped it into the end zone, and he said I got it.

For his own part, Bergeron believed that he made it over the goalline, even though he had a couple nervous moments immediately following the play:

I knew I was in because I saw goal line, and knew I was over it. But then it was totally silent, and the official hadn't signaled a touchdown. Then, he finally did signal it, and it was a relief.

Since the ruling on the field was a touchdown, there wasn't inconclusive video evidence to overturn the play upon review, saving the Longhorns from what would have been the most heart-breaking loss imaginable.

Gundy said that he didn't receive an explanation of the call when it happened:

We don't really get that answer on the field. We only get the answer that they are reviewing a fumble and then the only thing that I can say is the determination must have been that he didn't fumble or that he had already crossed the goal line before he fumbled. But I never got that answer.

The Oklahoma State head coach does, however, expect a call from the league official to discuss the ruling. For whatever that will be worth to his tender psyche.

From the Longhorns perspective, the comparable fumble that comes to mind in recent Texas history is the one forced by Aaron Ross on Nebraska wide receiver Terence Nunn in 2006 when Nunn was trying to go down and pick up the first down that would have iced the game had he been able to get to the ground safely.

Being on the other side of such a fumble, when the difference was winning or losing, not just securing the game? Talk about a worst-case scenario for that running play, especially after the elation of the 4th and 6 and the 32-yard pass to Mike Davis.

The scary thing about running backs or wide receivers diving for the goalline or trying to protect the football by going down is that it exposes the ball to the helmet of opposing players, exactly what happened by Bergeron and Nunn. At that point, since the points of contact from the hand and forearm are mostly rendered useless, it's all about the pressure to the chest.

Bergeron was smart in not extending the football too far, so his ball security wasn't poor, just a side effect of such dives into the endzone.

Something inherently scary about that play.

Fortunately for the Longhorns, it all worked out, much to the dismay of Coach Porcupine, who may have anger-stabbed someone with his spiked hair upon watching the review. Y'all know he's drawn blood with those things at some point. Gundy doesn't head-butt a la Zidane, he head-stabs.

This is also where everyone is thankful that Bo Pelini rock the Gundy do, or some fools would have been rage-stabbed by now. I would actually expect them to be regularly adorned with gore.

Um, anyway. There was a point here and it didn't start out being that.

Oh yeah, the fumble. So, Texas fans, renowned for your objectivity, does Gundy have a complaint based on the minimally-illustrated screenshot. Did Bergeron really fumble it?

Or, how about, how nice is it that the play wasn't ruled a fumble in the first place? How nice is it to start the critical three-game stretch 1-0 on a last-second touchdown?