Very few Texas Longhorns teams have performed as poorly defensively as the 2012 version. Time to bow up or bow out.

The year was 1956 and head Texas Longhorns football coach Ed Price had inherited a program built by predecessors D.X. Bible and Blair Cherry only to wash away a decade plus of post World War II good times in Austin. Price helmed the team to its worst season record ever at 1-9. That season would be Price's last and gave way to the now legendary tenure of one Darrell K. Royal who knew a thing or two of Texas Fight.

Given the final record, to say that 1956 team was not very good would be an obvious statement. Defensively speaking, along with a few of those led by former head coach John Mackovic, it arguably carries the highest ranking on the all-time list of worst statistically performing squads in the program's long, storied history.

The current head coach of the Longhorns, Mack Brown, is a distinguished head coaching member on this defensive allowed list as well. He has had a few of the worst statistically performing teams in program history. Sure, the argument goes that offensive firepower cycles and we are seeing it on the upside of that curve, but the data points don't fib. They just are.

Certainly if it were not for a couple of hall of fame type players, the story lines after the 2003 and 2007 seasons may have turned differently as those teams posted solid winning seasons and offensively overshadowed the weaknesses on the opposite side of the ball. The respepctive follow on seasons certainly slowed the fanbase churn for change as they went on to define Coach Brown's best teams. 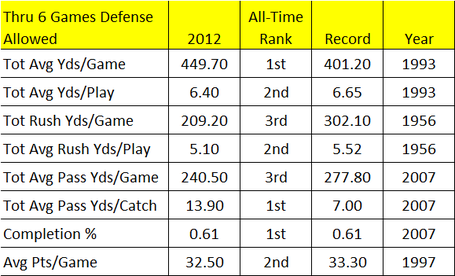 But it is this current defensive squad whose trajectory at mid-season is headed to be the worst that Mack Brown has fielded in his tenure and the program has fielded since the end of the Mackovic era if the trend line rankings above hold up. And given the porous sieve which it has proven to be, this seasoned observer can hardly believe it ultimately will not achieve this arduous level of distinction.

While football's euphemism "defense wins championships" is more often true than not, a solid defense offers many more tangible things to a football team. It sparks passion. It defines physicality. It inspires.

The University of Texas adopted the lyrics of a fight song early in the last century. It's a well known song like many others so classified. Its offshoot is a spontaneous stadium cry. Pretty basic but the Texas Fight chant that reverberates during home football games, and certainly at the neutral Cotton Bowl, each fall is a call to action. Many Longhorns teams through the years have either served as a catalyst for the fan faithful to erupt in the cheer or signaled its reverberating echo because of their tenacious play on the field.

So to the 2012 Longhorns I ask this question, "Where is your Texas Fight?"